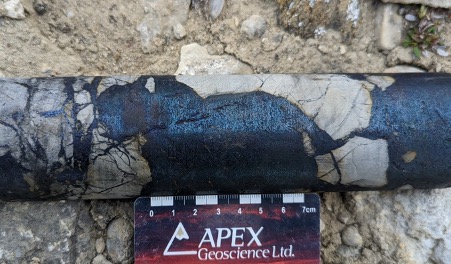 “We are excited to have our exploration partners American West Metals embark on a significantly expanded exploration program for this upcoming season,” CEO, Thomas Ullrich, said.

“Surface geophysics is expected to commence in March, followed by a major drilling program. The addition of a reverse circulation drill rig will facilitate lower-cost delineation drilling at the known zones of near-surface copper mineralization, while the high-resolution geophysical surveys will generate targets for new discoveries with the diamond drill.

“This ambitious programme, in parallel with permitting, beneficiation and baseline studies, will significantly advance the project in 2023.”

The footprint of near-surface, high-grade copper mineralization at Storm has been defined over an area of approximately 400,000sqm. Four main zones of mineralization have been identified to date.

The recent drilling at the 2750N Zone has highlighted the continuity of the copper zones, and the near-surface mineralization remains a focus for resource drilling due to its high grades, shallow position, and potential to provide a significant resource base for an initial low-cost open-pit mining scenario.

Outside of the 2750N Zone, the areas of immediate interest are the 2200N Zone and 4100N Zone, where thick intervals of copper mineralization have also been defined over a broad area. The planned drilling is designed to expand and test the continuity of these zones with a view to significantly increase the resource potential of the high-grade copper mineralization.

A Reverse Circulation (RC) drill rig will be used this year for the first time at the Storm Project. The drill rig is capable of drill depths up to 200m, ideally suited to shallow resource definition and will work in parallel with the diamond drill rigs currently onsite.

The RC rig is expected to drill until September and has the potential to complete over 10,000m of drilling during the 2023 programme.

The 2200N Zone is located approximately 540m to the south of the 2750N Zone. The zone is characterised by extensive outcropping fractured massive chalcocite mineralization and copper gossans over several hundred metres and is located within an area of strong faulting related to the main graben structures, which are an important control on mineralization.

Historical drilling has intersected bornite and chalcocite mineralization including 6.4m @7.38% Cu from surface and 22.35m @1.56% Cu from 22.9m downhole (ST97-03; all lengths are core length). The mineralogy and style of mineralization are similar to that of the 2750N Zone. Drill hole and geochemical data indicate that the main part of the 2200N Zone may be up to 300m long, 60m wide and 40m thick, giving strong encouragement for further drilling success in this area.

Potential extensions to this zone are supported by the presence of a shallow and strong Fixed Loop Electromagnetic (FLEM) anomaly that was defined in a 2021 survey.

Both the 2750N and 2200N Zones are located above a large, flat-lying and deeper 1,800m x 1,000m FLEM anomaly that was also identified in the 2021 EM programme. This feature is coincident with strong gravity anomalism between the major graben faults, which is an ideal location for the accumulation of sedimentary copper mineralization.

The 4100N Zone is a blind zone of mineralization defined by a historical Versatile Time domain Electromagnetics (VTEM) anomaly that is over one km long, and multiple untested shallow FLEM anomalies that were defined in the 2021 surface FLEM program. Given the lack of false-positive anomalies encountered in drilling of EM targets to date, and extensive copper mineralization in historical holes, these untested EM conductors have excellent potential to represent further occurrences of massive copper sulphides.

The 4100N offers considerable room for expansion. The known mineralization in the zone extends over an area of at least 1,000m x 400m and is open to the north, east and west, with potential for deep extensions to the mineralization across a fault on the south side of the Zone. Seventeen holes have been drilled at spacings of 100m to 200m, and all have encountered copper mineralization. The mineralization drilled to date is extensive and lies at a predictable stratigraphic position, providing an opportunity for close-spaced drilling to define further significant mineralization.

The recent discovery in drill hole ST22-10 suggests that known copper prospects at Storm may be related to a large, sediment hosted style copper system below the near-surface deposits.

The interpretation of the geochemical and geological data from drill hole ST22-10 indicates that the hole has intersected the margins of a mineralized system. This interpretation is supported by a series of coincident electromagnetic (EM), induced polarization (IP) and gravity anomalies that are over 5km long, and are associated with the 4100N Zone.

The other near-surface copper occurrences at Storm (2750N, 2200N and 3500N Zones) are also associated with large geophysical anomalies, which further supports the potential association between the two types of mineralization.

EXPANSION OF EXPLORATION INTO NEW AREAS

New high-resolution geophysical surveys will commence during March and will involve a closely spaced ground gravity survey and moving/fixed loop EM surveys. The surveys will cover the known prospects to better define the existing Falcon airborne gravity and FLEM targets, and extend into new, previously untested areas with the aim of expanding the prospective footprint of copper mineralization at the project.

These new areas include the Blizzard, Tornado and Tempest Prospects. The Tempest Prospect is located approximately 40km to the south of the Storm deposits, and it contains a large (>250m long) copper gossan exposed at surface that has assayed up to 32% Cu. Its location and distance from Storm highlight the extensive nature of the prospective copper horizon within the Project area.

Work is continuing to progress the potential near-surface mine development pathway for the Storm Project, in parallel with the accelerated exploration and delineation programme.

Beneficiation and metallurgical test work on drill core from the 2022 field season (ST22-02) will create a definitive processing flow sheet for a direct shipping product (DSP) from the representative near-surface Storm mineralization. Previous test work on these mineralization styles has produced a >53% copper direct shipping product using a full-scale ore sorter and with no further processing or optimisation.

The potential to produce a high value and high margin DSP at Storm could present an opportunity to provide a short lead time potential pathway to generating revenue from the project while continuing to explore for further discovery. Ausenco has been engaged and has commenced work on defining and initiating the permitting pathway for this style of operation at Storm.