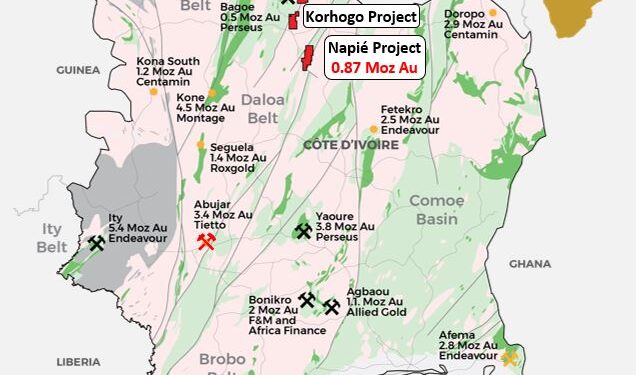 Mako Gold Limited (ASX:MKG) is pleased to advise that it has received positive results from phase 1 of the 25,000m auger drilling programme on the company’s 90% owned flagship Napié Project in Côte d’Ivoire.

Phase 1 has exceeded the company’s objective to demonstrate the multi-million-ounce gold potential of Napié by identifying several mineralized footprints equal to or several times larger than Tchaga or Gogbala along the extensive 30km shear and associated faults at Napié.

The programme began with orientation auger drilling over the Tchaga and Gogbala deposits, which form the basis of the maiden 868koz MRE.

The purpose of the orientation programme was to ensure that auger would be effective in identifying significant gold mineralization in other areas on Napié. Large, continuous auger anomalies were returned from Tchaga and Gogbala, thereby validating that auger works well on Napié to identify gold mineralisation.

During the orientation survey samples were collected and analysed at the laterite/saprolite interface (transition zone) as well as end of the hole (EHS) within the saprolite. High-grade results were returned from the transition zone including 55.90g/t, 2.20g/t Au and 1.79g/t Au. Only EHS was analysed for the rest of the programme since it worked well to identify the gold mineralised zones during the orientation phase.

Phase 1 of the 25,000m auger drilling programme is complete with all assays received. A total of 1,420 holes were drilled at a line spacing of 400m and sample spacing of 100m for 14,462m drilled. A total of 1,681 samples were submitted for bottle roll analysis.

“We are delighted with the results of phase 1 of the auger programme which has delineated multiple multi-kilometre drill targets,” Managing Director, Peter Ledwidge, said.

“The auger drilling has narrowed down the wide soil anomalies at Napié and pin-pointed specific long targets for resource expansion at Napié. We are particularly pleased with the extensive multi- kilometre mineralized trends highlighted at Tchaga North with over 10km of anomalies, as well as the 5.6km-long trend between the Tchaga and Gogbala deposits.

“Also noteworthy is a 1.4km extension to the south of Gogbala at the southern tip of the Gogbala deposit, where there has been no previous drilling.

“We believe that the auger drilling has helped to unlock the district scale multi-million-ounce potential of the Napié Project by narrowing down the wide soil anomalies so that we can hit the ‘sweet spot’ in our upcoming RC/DD resource expansion drilling programme in Q1CY23. Phase 2 drill auger drilling is scheduled to commence by the end of January with results expected by late February. RC/DD drilling will resume as soon as phase 2 auger results are received.”

The highest priority targets identified by auger for RC/DD drilling are as follows:

• The 1.4km-long zone south of the Gogbala deposit which returned 55.90g/t Au and 1.79g/t Au in transition samples outside of the resource in an area of no previous RC/DD drilling.

The auger drilling programme has successfully narrowed down wide soil anomalies coincident with the 30km- long Napié shear and associated splays. This will allow the Company to vector in to more specific drill targets for resource expansion.

An excellent example of how the auger is refining the drill targets is at Tchaga North, where the soil anomaly is up to two km wide. Auger has identified two new parallel zones which provide precise drill targets

The phase 2 auger drilling programme, which will consist of tightening up the grid to 200m X 50m on select targets identified in phase 1, should commence in late January. Results from phase 2 are scheduled for mid to late February with planned RC/DD drilling to commence shortly thereafter.