Kevin McElligott joined Franco-Nevada Corporation (TSX:FNV, NYSE:FNV) in 1996. He has been Managing Director – Australia since 2008, and is responsible for business development and portfolio administration in Australia. He is based in Perth, Western Australia. Mr. McElligott holds a Bachelor of Commerce degree from the University of Saskatchewan and is a Chartered Professional Accountant.

Can you offer a quick introduction to Franco Nevada’s core business strategy and how the company originated?

Franco-Nevada started in the 1980’s during a gold bull market as a low-risk way to invest in gold. We were focused on gold royalties from the outset. If you look at operating mines around the world, you will find that 20-30% have existing private royalties, and we were the first company to acquire a substantial portfolio of these gold royalties.

We do not operate mines, develop projects or conduct exploration. Instead, we own and continue to grow a large, diversified portfolio of royalties and streams. These expose Franco-Nevada to the exploration and price optionality inherent with geologically favourable properties. Stream finance for project development was a logical extension of the royalty business model, and has allowed us to grow the portfolio substantially in recent years.

How do you typically look to structure stream financing?

The typical stream deal is a metal purchase agreement that provides, in exchange for an upfront payment, the right to purchase all or a portion of the gold, silver or other products from a mine at a preset price. While streams have similar exploration and price optionality to royalties, they differ from royalties because of the ongoing cash payment required to purchase the physical metal.

For a company building a project what are the pros and cons of stream financing as opposed to traditional debt and equity financing?

The pros and cons are often just two sides of the same coin. With a rising commodity price the stream becomes more expensive, and with a declining price the stream cost falls. All capital has a cost. Investors expect a profit. Stream finance costs, unlike debt or equity, are part of the unit productions costs at the mine. So the stream effectively converts a portion of the project capex into a variable cost of future production that rises or falls with productivity and commodity prices. It’s a better alignment of project capital requirements and ongoing operating results.

“Often the stream is the last piece of the puzzle to get construction underway, when debt limits are stretched and equity looks expensive”

This may seem to run counter to the typical project development model, which often seeks to maximize upfront capex in order to minimize ongoing operating costs. However, one benefit of stream finance is that it allows the operator to max out the upfront capex, and capture those long-term operating efficiencies, without excessive debt restrictions or equity dilution.

For a company seeking finance, do you have a preference for the stage of a project?

There’s really two stages where we like to get involved. First, there has to be a deposit. We don’t invest in grassroots exploration. Once there’s been a discovery and a resource is defined we can look at royalty finance. These are smaller dollar value deals, but can be much less expensive for the operator than raising equity. Once the operator has completed a BFS, then we can look at stream finance for construction. We are much less likely to get involved in the intermediate stages between discovery and construction, as parties rarely get together on the risk-reward assessments. Sometimes it seems everyone with a PEA or PFS wants to value the project as if there’s zero risk. Perfectly understandable on the operator’s part. They are looking ahead to a large construction spend in the future, so they can’t carve out a big revenue slice at an earlier stage. Franco-Nevada most often get involved at the endgame for a stream finance deal. Often the stream is the last piece of the puzzle to get construction underway, when debt limits are stretched and equity is looking expensive.

What companies have you supplied finance to and what deals have you executed recently?

We have worked throughout the cycle and negotiated deals at every stage. The result is the four cornerstone stream assets in our portfolio now. First there was $US 1 billion by-product funding for the Cobre Panama mine being built by First Quantum. Next was the $US655M funding to Lundin Mining to acquire the Candelaria mine. Then we did two deals with operators looking to reduce debt, $US610M to Teck for a stream on Antamina, and $US 500M to Glencore for a stream on Antapaccay. Our most recent stream finance deal was $US 178 million more for the Cobre Panama project, which First Quantum will put toward buying out a minority partner there.

How is Franco Nevada’s portfolio weighted with respect to gold explorers, developers and producers?

If you looked at our global portfolio, you would think that were big on grassroots exploration and oil and gas. At last count we had 47 producing mines, 40 advanced projects, and 173 royalties on exploration projects, plus another 80 oil and gas royalties. With a portfolio this big the numbers and classifications seems to change almost daily. The fact is we have purchased several smaller portfolios over the years, which included many exploration stage assets. Those transactions would have been driven by one or more producing or near-producing assets in the portfolio, and acquiring the other exploration assets was a bonus.

When financing projects what were the key factors you look for?

No mysteries here. We have the same criteria as everyone else – long life, low cost, and lots of exploration upside. For stream finance the key is a precious metal by-product that can be carved out without impairing the project’s comparative cash costs. Since a stream increases unit costs, it’s a good indicator of just how robust the project truly is. Sometimes we decline to offer a term sheet for a stream or downsize proposed funding, since it’s obvious the project would become uncompetitive.

Geographically Franco Nevada has a large global footprint and a limited exposure in Africa and eastern South America. Is this a strategic geographical decision and what are your thoughts on project development in specific parts of these regions?

We need to go where the gold is. As passive investors we need confidence the jurisdiction respects the rule of law and private property rights. Our favourite countries to invest in are Canada, Australia and the United States. Our portfolio is heavily weighted to those three jurisdictions, by number of assets. After that it gets more selective. The quantity of deals in other countries is relatively small, although some of them are large by dollar value. Key criteria is the quality of the deposit, and who is the operator. We have become more adventurous over the years as the portfolio has grown and diversified. It’s a balancing act. We don’t want to ignore good opportunities, but we also don’t want to be heavily invested in jurisdictions viewed are high-risk by our own shareholders. 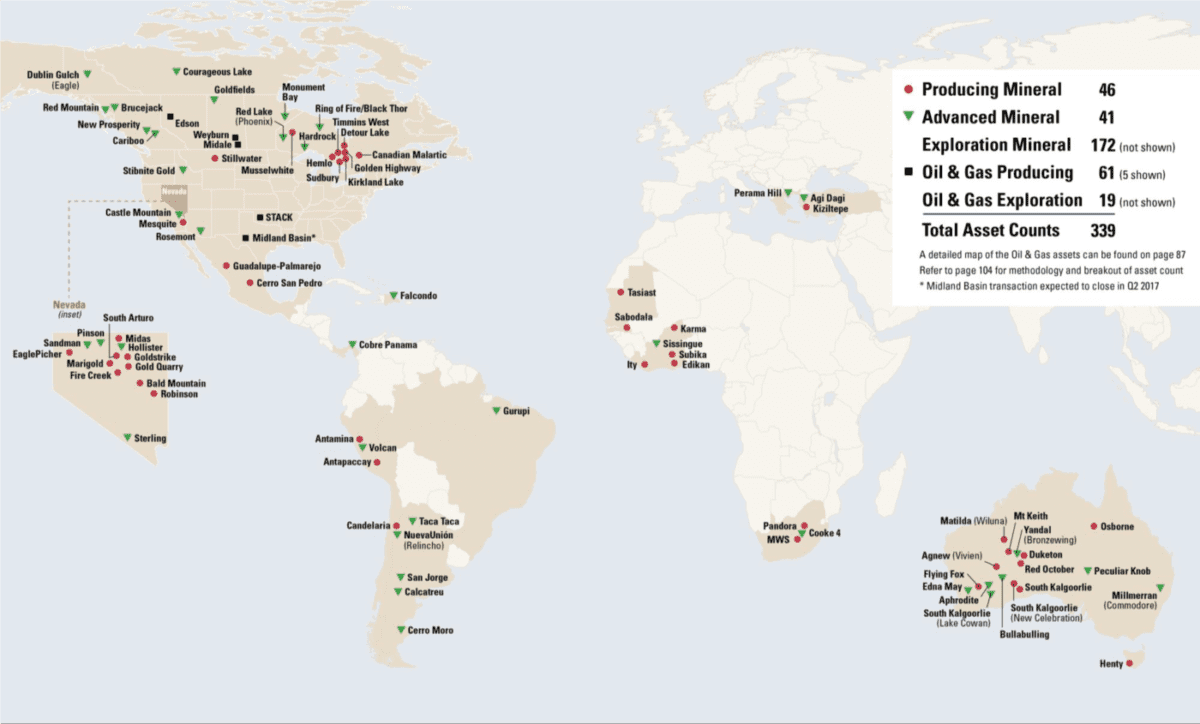 What commodities have Franco Nevada traditionally focussed on and why?

The focus has always been gold. As for why, I won’t get into the rationale for investing in gold here, but I can recommend “The Gold Book” by our Chairman, Pierre Lassonde. Although it’s hard to get hold of since it an out of print classic now. Franco-Nevada will maintain its gold focus, with at least 70% precious metals. This has affected the deals we look at over the years. Back in 2008 when oil prices were strong and gold was yet to take off, our revenue mix was around 60% gold and 40% oil and gas. So we focused entirely on gold deals for several years. Right now our revenue is 92% precious metals (including 71% gold), so we have some flexibility to look at other commodities. We invested $US 210M in two oil and gas portfolios during the past year.

Franco-Nevada aims to stay cashed-up so we can invest in deals that make sense in any market. Right now we have about $US 1.9 billion in available capital. That’s a conscious decision on our part to minimize gearing and maintain our financial flexibility. As for other financiers, I don’t think they had a choice. They would have liked to get involved in the very same deals we did, but their own sources of capital dried up. We never like to see a bear market, but we recognize it’s the best time to invest for the long term. So we would much rather have the cash available to take advantage of those opportunities, rather than gearing up the balance sheet seeking to maximize ROE in the near-term. There’s enough leverage in the underlying mining assets, so there’s no need to create more with our own balance sheet.

“We have the same criteria as everyone else – long-life, low-cost, and lots of exploration upside”

Your past work has been focussed in the mining space, why have you recently made the move into the oil and gas space?

We have always had oil and gas royalties in the portfolio. Franco-Nevada was co-founded by Seymour Schulich and Pierre Lassonde in 1983. Pierre Lassonde was a gold analyst and Seymour Schulich was a fund manager who was very successful with oil and gas investments. To a certain extent the creation of Franco-Nevada was an application of an oil and gas investment model to gold. Private royalties are very common in onshore oil fields. So there is always plenty opportunity to invest in oil and gas royalties. It’s a much bigger industry than gold. My personal prediction is that the biggest resource company on the world in 20 years will be a group doing stream finance on oil and gas or energy projects.

Will your deals be structured differently in the oil and gas market?

Until now, we have been buying existing oil and gas royalties, and have not got involved in project finance. That would require substantial capital and a change in focus. Can’t see that happening within Franco-Nevada. Perhaps a sister company or some corporate spinoff, but that’s entirely speculative at this point.

Has Franco Nevada got aspirations to move into other areas of the energy market such as battery materials or uranium?

We are looking to diversify a bit. If we find a project that’s long-life, low-cost and lots of exploration upside, then we will to invest. We would be wary of investing in commodities that have had recent price surges, so teaming up with a low-cost producer with staying power is key.

Gold Drives Exploration Budgets Up For The First Time Since 2012