Gold Drives Exploration Budgets Up For The First Time Since 2012

After a prolonged period of strain in the exploration sector, rising metal prices since 2015 have finally led to increased investment in exploration, particularly in the junior end. According to our 2017 figures, the hunt for gold has been the main driving force behind increased budgets, with Africa a beneficiary.

As indicated in S&P Global Market Intelligence’s Corporate Exploration Strategies 2017, the mining industry is in a state of recovery and exploration efforts have been ramping up since late 2016. As seen below, 2017 saw companies increase their nonferrous exploration budgets year-on-year; the first time since 2012.

Despite the strong growth in the junior exploration budget, the proportion of the industry exploration budget planned by this sector, accounting for 28% of the total in 2017, is a far cry from the historic high share they held a decade ago, when they accounted for as much as 55%. It has taken a sustained period of overall healthier commodity prices to persuade risk-averse investors and companies to commit to funding millions of dollars in the search for new reserves and resources.

Having said that, the industry is still very much in a state of caution, with some companies still reticent to commit. Although junior budgets increased, our study indicated that the total number of juniors exploring continued to fall and sits at a 13-year low, at 1,253.

For the juniors in particular, the increased budget in 2017 was driven by the search for gold. The yellow metal dominates budgets for several factors, including investor interest, the high value of gold and smaller deposit scale against, for example, base metal occurrences. In 2017 it accounted for 53% of all junior company budgets, or US$1.2 billion. As such, junior gold exploration represented 15% of the global nonferrous exploration budget.

Gold prices began recovering from late 2015 lows and, after a hefty correction in late-2016, have generally been on an upward trajectory since. This sustained period of rising gold prices, after breaking the downward trend between late-2012 and December 2015, bodes well for the junior sector this year. 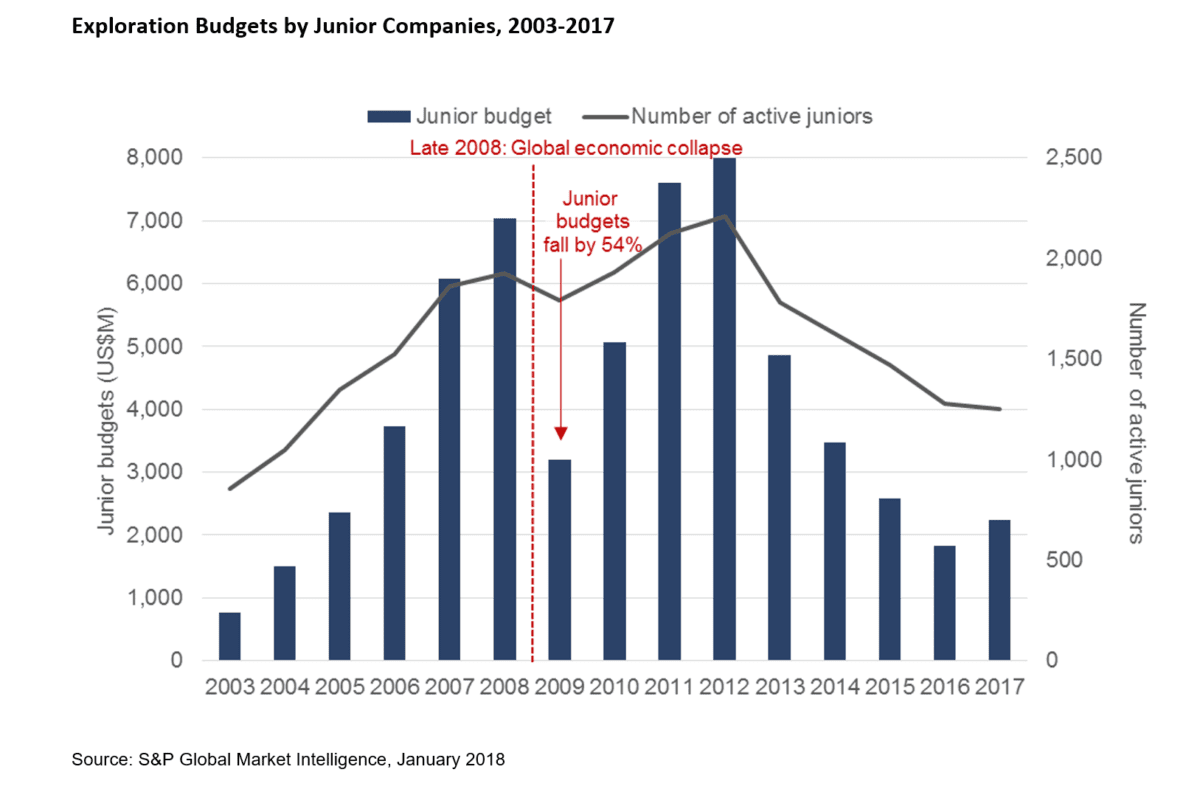 Gold exploration in the continent is focused on West Africa, which held with 67% of 2017 African gold budgets. SEMAFO, spending US$20 million primarily on their construction stage Natougou project, was the highest spending company in Burkina Faso. Nord Gold, Endeavour, Acacia and Iamgold all budgeted between US$9-10 million for exploration in the country as well. While Newcrest and Endeavour spent around US$19 million each on projects in the Ivory Coast and Centamin and Randgold spending US$13 million and US$9 million respectively. Newmont spent 92% of their US$26.8 million gold budget in Ghana on minesite exploration at Akyem and Ahafo. The largest single country company budget in West Africa was US$30 million by Randgold resources in Senegal, which was spend on their Massawa project and, regionally, they also budgeted $US17.2 million in Mali. Overall West African budgets were relatively evenly split between stages, with 33% spent on minesite, 38% on late stage and 29% on grassroots. 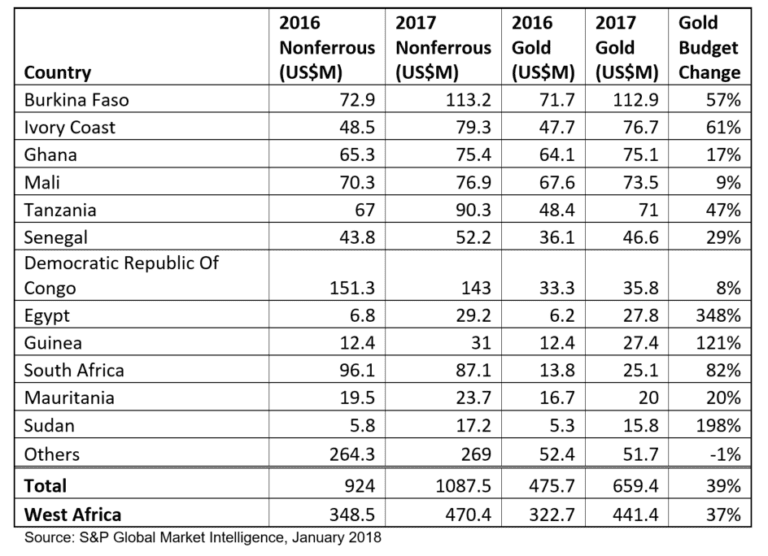 Aside from West Africa, exploration focused on Tanzania, South Africa and the Nubian shield, with the last (covering areas of Egypt, Sudan, Eritrea, Djibouti and Ethiopia) seeing a huge increase in gold exploration activity, up 138% to $US59 million. For example, Resolute Mining acquired two large exploration blocks near Centamin’s Sukari mine in Egypt and Orca Gold, a TSX-V listed junior explorer, spent the majority of their large budget on their Block 14 project in the far north of Sudan. 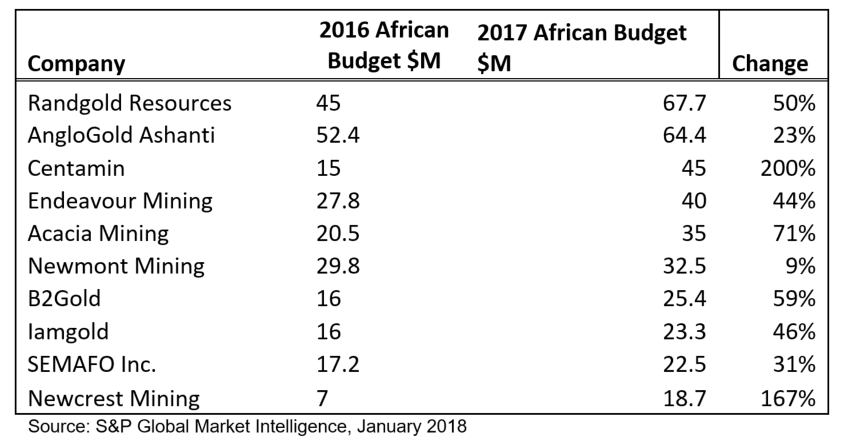 Exploration has certainly been more of a feature in company investor materials over the last year, with many remarks about how expansion though exploration was preferable to other methods. Indeed Endeavour stated in the start of  2018 that “Exploration investment will remain a key focus, with 40% of the budget allocated to high-potential greenfield exploration activities in support of our goal of generating our next large-scale project through organic investment”. This highlighting how much investors now value exploration as a way of expanding instead of through costly and risky M&A.

Preliminary indicators in 2018 are that the recovery in budgets seen in 2017 will be sustained. Avesoro resources, which operates a trio of mines in West Africa has committed to spend US$25 million, utilizing 24 drill rigs over last year’s 8. Intermediate miner B2Gold is allocating $25 million to West Africa and $5 million in Namibia (proximal to their Otjikoto mine). Roxgold, the Burkina Faso focused junior producer, expects to spend $9 million on minesite and regional programs in the country in 2018. All of this bodes well for service providers. For example, Energold drilling, which operates around the world, recently stated that they will be mobilizing more rigs by the end of February than they have done in that period in five years. 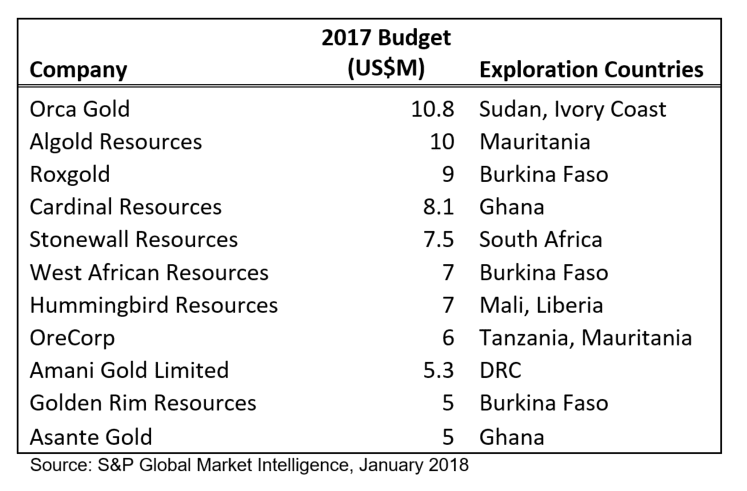