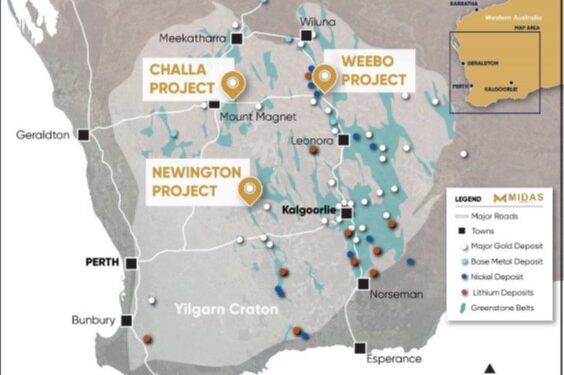 Midas has received assay results for the first 412 auger geochemical samples over a strike of two km of the Kawana East pegmatite belt which extends for at least nine km.

The numerous anomalous values is due to the large number of small to very large pegmatites and pegmatoid outcrops and logged in shallow auger holes.

Midas is preparing reverse circulation (RC) drill sites at intervals over about 8km strike of the Kawana East pegmatite belt to obtain an understanding of variability of the orientation, size and mineralogy of the pegmatites. Drilling is expected to commence in August 2022.

“These results are an excellent start to our systematic exploration for LCT pegmatites at Newington,” Managing Director, Mark Calderwood, said.

“The quantity of anomalous LCT pegmatite indicator elements is very impressive as are the number of pegmatite outcrops discovered to date.

“We expect to commence a reverse circulation drilling programme at Newington within the next few weeks.”

The Kawana area at Newington covers 30 sq. km. Midas’ initial systematic work has commenced on the eight sq. km eastern pegmatite belt that follows the Copperhead fault over at least nine km strike. The northern section of the belt has been subject to limited LCT geochemistry and resulted in the discovery of significant lithium mineralisation, with rock-chip sample results up to 1.3% Li2O from a highly weathered LCT pegmatite.

More recent mapping has identified hundreds of pegmatite outcrops and systematic auger drilling commenced in the south and is working north.

A further 25 samples were anomalous in Be, Nb or Rb and are indicative of less fractionated pegmatites. Sufficient outcrops and geochemical results are at hand to provide focus for Midas’ initial drilling at Newington.

The aim is to drill 50 RC holes over 8km strike to gain an understanding of the variability of the mineralisation and fractionation of the pegmatite belt to locate the areas most prospective for lithium LCT pegmatites.