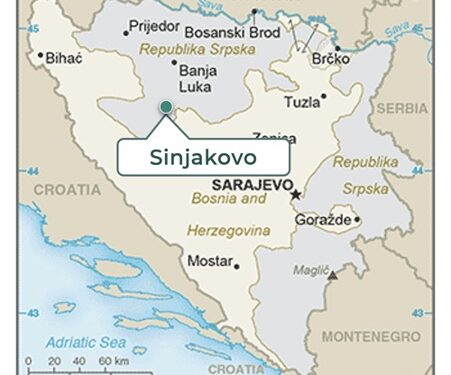 Lykos Metals Limited (ASX: LYK) has intersected three mineralized zones from the first trench at the Erak locality at the company’s wholly owned Sinjakovo and Cajnice projects in Bosnia and Herzegovina.

The three new polymetallic-bearing shear zones were identified in the first trench at the Erak locality within the Zekil-Erak Prospect, the widest zone being 61m of trench length (~50m true width) that has returned an average grade of 1.50g/t gold.

“The Erak locality is fast emerging as a high-priority target for drilling in 2023 following the discovery of significant gold mineralization at surface from the first trench,” Chairman Stephen Allen said.

“Lykos is entering its second year as an ASX-listed exploration company with a substantial body of knowledge built from systematic, targeted drilling and fieldwork campaigns in 2022 at the Sinjakovo and Cajnice projects.

“While on-ground activities are paused for the winter period, the exploration team is consolidating and interpreting the significant data collected in 2022 to further grow our understanding of the outstanding potential across our tenements.”

In July 2022, the company initiated a five-trench programme to follow up on a four sq. km gold-in-soil anomaly discovered at the Zekil and Erak localities. Three trenches have been completed to date (two trenches at Zekil and one at Erak).

Trenches were dug to bedrock, and continuously channel-sampled at 1m intervals by honouring the geological boundaries (lithology, alteration and mineralisation) where possible. The channel profile (width x depth = 10cm x 10cm) was cut using a portable rock saw. Further filed work at Erak locality was paused due to the onset of the winter period.