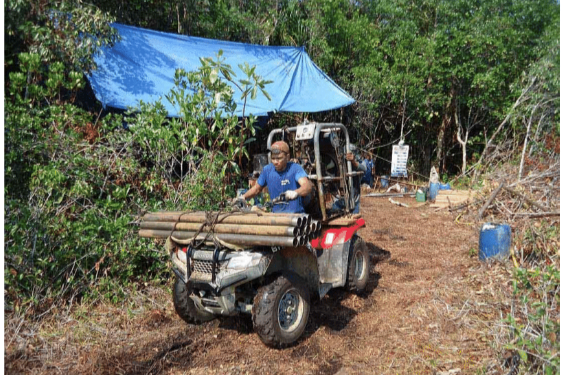 The MRE for Adelar, announced on 25 October 2022, has been revised using updated economic parameters consistent with the parameters used for the estimation of the maiden Tabocal MRE. The combined MRE contains a total of 725,230 ounces 5E PGM ́s (platinum, palladium, iridium, rhodium, and gold).

• The inclusion of the Tabocal target increased the Mineral Resource by 73,520 ounces of 5E PGM’s, comprising platinum and iridium.

• The Adelar estimate was revised applying the same economic parameters as those utilised for Tabocal to generate the constraining open pits at both prospects. As a result, the Adelar MRE increased by 10.5% from 590,300 ounces 5E PGM’s to 651,710 5E PGM ́s.

• The Mineral Resource is located relatively close to the surface and would be mined in an open pit. It is limited to 100m below the surface based on the depth of the deepest mineralized intersection.

• The next resource upgrade will target the addition of other prospects within the Três Estados project, plus infill drilling.

“We are delighted to announce the inclusion of the Tabocal prospect in the Três Estados Mineral Resource Estimate. The Tabocal prospect has considerably increased the MRE by 73,250 ounces of 5E PGM’s,” CEO, Andre J Douchane, said.

“It is relevant to consider that the Tabocal MRE covers an area of one Ha which represents approximately 0.3% of the known gabbroic bodies at Três Estados.

“Our objective is to expand the resource and move it to an indicated or measured category through infill and development drilling which is planned to begin in April or May depending on the rains.”