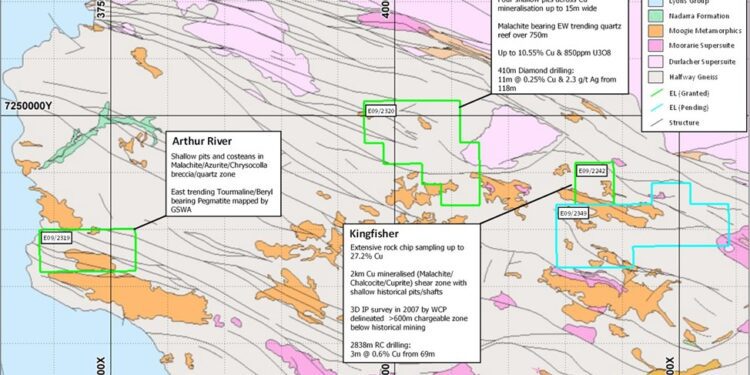 The company is currently exploring for volcanogenic massive sulphide (VMS) mineralisation at its 100% owned and Kingfisher and Mick Well Projects.

Preliminary results from a Kingfisher and Mick Well helicopter-borne electromagnetic survey have been received by the company and reviewed in conjunction with the company’s geophysics consultant, Mira Geoscience Asia Pacific Pty Ltd.

That work has identified five new significant and strong conductors. Each of the bedrock conductors is within the range of possible responses expected for VMS base metal mineralisation and is derived from geology in the immediate area of the anomaly.

A plate model has been produced for the western-most anomaly which captures the strike, dip and position below the surface of the conductor allowing confidence in the position for drill testing.

Conductors two and three are associated with discrete magnetic lows, which provide further support for the veracity of the targets.

Further modelling of the conductors by the company’s geophysicists to improve the target positions is currently underway and will be completed prior to drilling.

Conductors four and five lie on interpreted structures close to the Kingfisher project.

“This is a fantastic result for the company. The airborne electromagnetic survey has delivered several high-quality targets in this under-explored area,” Mr Farrell said.

“When we received the preliminary survey results we knew we were looking at some interesting conductors and immediately mobilised to site to confirm that the responses were geological and not due to anything else at surface, such as large metallic objects. The newly identified targets will now be prioritised for drilling as part of the Kingfisher and Mick Well RC program scheduled for Q3 this year.”

The survey was flown by UTS Geophysics Pty Ltd using the industry leading Versatile Time Domain Electromagnetic (VTEM Max) system. It covered more than 25km of strike of the company’s target geological unit and structures and included more than 820 flight line kilometres and covered an area of 145 sq. km.

The Kingfisher and Mick Well Projects are located approximately 230km east of Carnarvon, in the Gascoyne region of Western Australia. The area is prospective for volcanogenic massive sulphide style mineralisation. Copper mineralisation at the Kingfisher Project is exposed in a series of shallow historical mining pits over a strike length of 2km.

Previous exploration at the project has included geophysical surveys, surface geochemical sampling and limited reverse circulation drilling, with drilling intercepts including 3m @ 0.6% Cu (KFRC10) and rock chip results of 15.3% Cu, 6.3% Cu, 6.2% Cu, 5.9% Cu and 3.4% Cu. Mineralisation at Mick Well outcrops as quartz reefs and gossanous ironstones which are up to 10m in width. Past exploration in the area is limited, with previous rock chip sampling showing results up to 10.6% Cu over a strike length of 1km within a laterally extensive geological horizon. Only four drill historical holes have been completed at Mick Well, with the best result being 11m @ 0.25% Cu from 118 m (MWDD001).