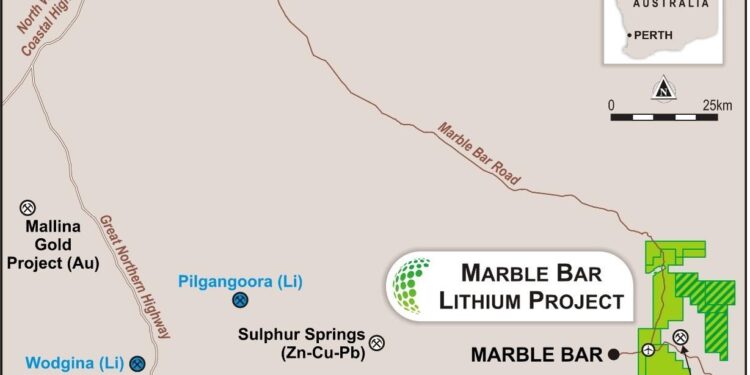 Multiple drillholes from the recent RC programme intersected lithium mineralisation within and along strike from the existing Archer deposit, with significant lithium anomalism detected in isolated scout holes.

Managing Director, Jamie Wright, said two RC holes were also drilled for gold in the northern part of the project area, for which assays are still pending.

“Our maiden RC drilling program as a listed company has delivered some excellent results, providing us with a fantastic foundation to build on as we progress into our next phase exploration programs, which planning for is already well underway,” Mr Wright said.

“Our strategy of stepping out from Archer to test the broader area has given us confidence that mineralisation at the MBLP continues to extend beyond Archer and has now been traced for over 6km in a north-to-south strike direction, and remains open, including to the east and potentially into our newly acquired tenements.

“It is an exciting time for the Company to be discovering new lithium prospects and expanding its landholding within a global economy that is seeing lithium supply shortages as car manufacturers ramp up production of electric vehicles. We have commenced targeting, planning and approvals processes for our proposed CY4Q RC drilling campaign.”

The key objectives of this recent RC drilling program were to undertake step-out drilling to identify opportunities to further grow the existing JORC Inferred Mineral Resource of 10.5Mt @ 1.0% Li2O1 at the Archer Deposit and to commence exploration in the surrounding target areas. The Company is pleased to report that the program has significantly extended the known strike length of known lithium mineralisation at Archer and its surrounds.

A number of RC holes and surface rock chip samples recording lithium mineralisation and anomalism, with associated anomalous tantalum, provides further evidence that the MBLP is continuing to emerge as a significant spodumene lithium deposit in a premier hard rock lithium mining jurisdiction.

Scout drilling using with spaced and isolated RC holes to the south of the Archer Deposit has resulted in the discovery of further spodumene hosted lithium in pegmatite dykes, significantly extending the known strike length of the broader mineralised system.

Assays from some of these RC holes include:

The southern area was identified through surface mapping and observation of pegmatite in road spoil over a relatively large area.

The Ccmpany considers this location to be highly prospective, having not been previously tested by drilling, and it remains open for further discoveries. Immediately following completion of the RC drilling programme, further spodumene bearing pegmatite outcrop was identified over 1km to the south of this new discovery zone, with rock chip samples returning:

• 3.98% Li2O in RP50700. This newly identified outcrop area remains undrilled and will form part of the next phase of exploration mapping and drilling.