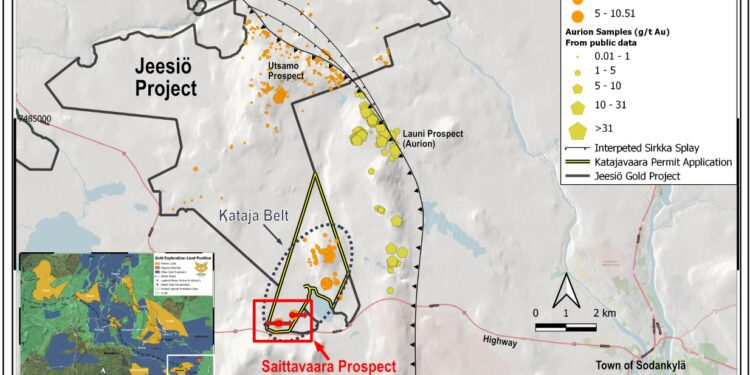 FireFox Gold Corp. (TSXV:FFOX) (OTCQB:FFOXF) has obtained promising results from its recently completed a three-hole reconnaissance diamond drill programme at the Saittavaara Prospect on its 100%-owned Jeesiö Project in Lapland.

Saittavaara is a prospect near the southern boundary of Jeesiö, along the highway from Sodankylä to Kittilä.

These three holes, totalling 309.1m, are the first known drilling in the area by any operator. Two of the three holes encountered gold mineralisation of more than 0.9 grams per tonne (g/t). Drill hole 21JE002 intercepted a near-surface zone of 4.0m averaging 2.03 g/t Au, including 2.0m at 3.18 g/t Au.

President and CEO, Carl Löfberg, said confirming gold in bedrock with the first shallow drill holes in the area is significant because it highlights the potential of the untested anomalies farther north on this trend There are numerous higher-grade gold bearing rock chip samples associated with D3 and D4 structures farther northeast from the initial Saittavaara occurrence.

“The drilling at Saittavaara during May 2021 was simple and efficient, easily accomplished during a short break from the Mustajärvi programme,” Mr Löfberg said.

“In previous programmes our geologists sampled a lot of gold in veins and boulders at Saittavaara and Katajavaara. Drilling into this zone of quartz-sericite-pyrite alteration with 3.0 g/t gold mineralization is very encouraging as we follow the major structures and geophysical targets along trend towards Katajavaara.

“It is exciting to confirm a second project now with significant gold in drill holes, only a short drive down the highway from Mustajärvi.”

The area is believed to lie within highly deformed metasedimentary rocks that are cut by later D3 and D4 shear zones. Rejuvenated interest in the area came from the last FireFox sampling campaign of 2019 that returned 6.4 g/t Au from a boulder at Katajavaara (approximately two kilometres north of the Saittavaara occurrence).

The prospectivity of Saittavaara was enhanced by results from reconnaissance mapping and sampling during 2020 that returned rock chip samples of 2.60 and 2.75 g/t Au from angular quartz boulders and outcrop with significant iron staining and fresh pyrite.

Saittavaara is the southernmost of three prospects in a belt spanning approximately three kilometres, where rock samples returned highly anomalous gold values from 0.2 to 10.5 g/t. The anomalies at Saittavaara are part of a structural corridor trending northeast towards the higher-grade gold samples at Katajavaara. In addition, these prospects are situated only a few km from the high-grade gold reported at Aurion Resources’ Launi Prospect.

During late 2020, FireFox commissioned a small-scale 2D pole-dipole gradient array induced polarization/resistivity (IP) survey with GRM Services. The single-line IP survey was a trial to investigate if the gold samples at surface had roots in outcrop. The data showed a near‐surface high-resistivity, high-chargeability feature that corresponded well with the pyrite-bearing quartz veins and silicified sediments that hosted the gold in sampling. The survey also suggested the presence of deeper anomalies in the area, but the design of the test survey was insufficient to resolve the deeper targets for drilling. Firefox intends to expand the IP survey over more of the mineralised trend later in 2021.