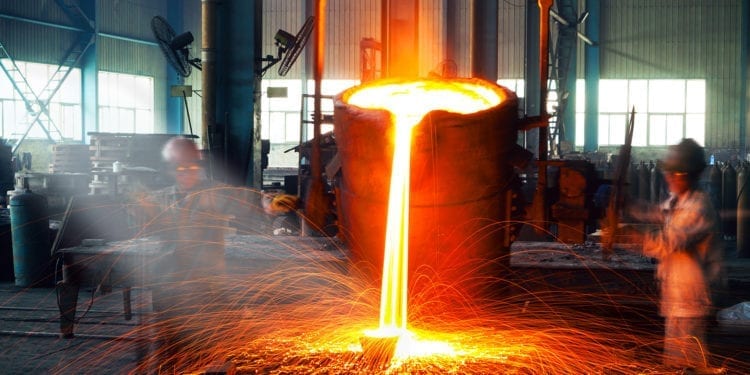 After the strength which characterised late 2017, metals and bulk commodities have found it tougher going into 2018, with most prices now trading lower year to date after a strong start to the year. However, the vast majority are still trading well out of cost curves, reflecting a market which is aiming to attract every available supply unit to meet buyer demand, and one in which producer cash margins are set to remain healthy.

Clearly, macroeconomic risk is rising, with concern that trade friction will derail the robust industrial recovery, which is now in its third year and is set for the highest year-over-year growth rate since 2011. We do believe the current quarter will mark the peak growth rate in the industrial cycle. Indeed, some sector indicators (such as PMIs) are starting to weaken as more caution on future order books creeps in. However, we are still looking at an environment of growth, and in our view tariffs affecting a small part of the global economy will not be enough on their own to derail this. Certainly, activity indicators in the post Chinese New Year period have been mixed. Manufacturing seems in a good state, with metals-intensive areas like air conditioner production looking strong. However, the construction sector is giving some cause for concern, with steel and aluminium inventories slow to draw post Chinese New Year and thermal coal prices finally starting to drop. Meanwhile, there has been some impact from the NPC slowing ‘pollution generating’ activity in Northern China over March. We would note that some physical market set prices, such as chrome and manganese, have been trending higher in recent times.

In our view, China’s economy is fine, but is naturally slowing. And if it slows too much the government still has a range of tools at its disposal to buffer the cycle. Even this year, although the reduction of the fiscal deficit suggests a willingness to target structural change in the economy’s make-up, given the central government deficit is small relative to local government and shadow bond issuance, overall spending is unlikely to drop. Indeed, if we enter an environment of reciprocal trade barriers we would expect the Chinese liquidity pump to be run a bit harder once more to sustain domestic confidence.

Given Xi’s previous commitment to reducing social imbalances, we expect strong fiscal investment in infrastructure, housing, and agriculture in rural areas over the coming five years. The need to develop a rental housing market will involve some government-sponsored build. Such rural spending should be positive for machinery (China’s tractors per acre remain low) and potentially fertilizers on a longer-term view, while it buffers against decline in industrial metals demand.

We are strong believers that the Chinese government wants the reflation cycle to continue in order to continue upstream deleveraging and prepare the ground for a more aggressive consolidation cycle over the coming years, and this will involve support for industrial demand should it be needed. Moreover, the supply-side restrictions in China will continue to be driven both deeper and broader, with further cuts and capacity swaps in steel, coal and aluminium, potentially augmented by new areas such as copper smelting.

One thing that hasn’t faltered, however, is the reticence of the supply side with regard to new investment. At the recent BMO Global Metals and Mining Conference, with very few exceptions, miners continued to promote strong return of capital to shareholders, and while growth projects were discussed, most are still shying away from progressing them. We are getting some natural elastic response from smaller producers on the supply side, but not enough to solve future deficits. We do see global mining expansion capex rising over the coming years, but expect large greenfield options with long lead times and high upfront capex will remain out of favour.

On the supply side, one area we consider underappreciated in terms of its impact thus far is China’s clampdown on its domestic mining industry. The private sector miners there that have traditionally provided much of the through-cycle flexibility have been starved of capital and seen the environmental hurdles (both in terms of permitting and costs) continually raised over the past two years. In many cases, not only has Chinese mining not reacted to price signals as in the past, but is actually falling despite rising prices. This is behind upgrades in areas such as molybdenum and manganese, where the world has become used to Chinese refined exports which will no longer be available to the same extent.

Leading the wider inflationary cycle, mining cost inflation has been making a comeback since mid-2017, though less aggressively than in previous cycles despite the strong cash flow at miners. We expect late 2017 to have marked the cost nadir across the global metals and mining industry. While this affects all producers, in general terms the effect is more pronounced on the higher-cost players with lower-quality assets, which are less energy efficient. The result is a steepening of cost curves once more, to the benefit of the larger, lower-cost producers that have the best material but in situ grades. Their delta to a mid-cycle cost-support price is higher than previously seen.

Feeding into inflationary pressures, expectations of future oil prices are also rising. Recently, BMO’s Oil & Gas research team raised their 2018 and 2019 estimates for both Brent and WTI. In their view, the sustainable trading range for crude oil prices has shifted higher over the past six months due to the combination of improving oil market fundamentals and heightened geopolitical risk. Mining is, of course, a very energy-intensive industry, such that oil plays a major role in cost structures, particularly for bulk commodities, which are logistics-heavy. In particular, a $10/barrel move in the oil price translates to a $3-4/t rise at the top end of the iron ore cost curve, but less at the bottom end.

Inflationary pressures can be a blessing and a curse for metals and bulk commodity markets, depending on the investment time frame. To the extent that they reflect improving global growth, and thus improving near-term demand, this is certainly helpful. However, inflationary pressures also bring increased probability of economic tightening, which tends to lead through to lower future demand expectations. Currencies are of course highly important for margins, and the recent appointment of Larry Kudlow as a White House economic advisor has raised many questions on the potential impact on the U.S. dollar. BMO’s FX Strategy team thinks that he will increase rhetoric for a stronger USD over the coming months, which FX markets may initially react to, but that any honeymoon phase would last only 12 months. Given the potential for aggressive tax cuts and a rising fiscal deficit, in the absence of a full-blown trade war we are longer-term bearish USD, particularly as we are at a stage of the cycle where ex-U.S. Central Banks are now pulling back on QE. We still see major structural economic challenges for many commodity producing countries (South Africa, Brazil) while for the Canadian dollar our economics team is far from positive, but certainly not as crushingly negative as the current market expectations seem to be.

For the coming period, we like exposure to copper given the deficit from 2019 onwards is becoming ever more tangible, while China is struggling to import enough copper units this year. We also believe the positive aluminium story will re-emerge as Chinese exports head lower from Q2 onwards. While we have both met and thermal coal prices falling, we believe the wider market overestimates the pace of decline and see them as strong cash generators for this year. Over the course of this year, we expect spot price recovery (from a very low level) in uranium. Longer term, we view cobalt, chrome and copper as the most supply-constrained commodities.

Compared to our long-run equilibrium price expectations, the majority of commodities are trading well above these at the present time. This is natural in a period of the cycle where we have seen supply lag demand recovery. However, we see nickel and aluminium as currently trading below our long-run forecast. Relative to consensus expectations, we are more bullish on copper, aluminium, cobalt, alumina, manganese and thermal coal. We are more bearish on nickel, platinum and palladium. 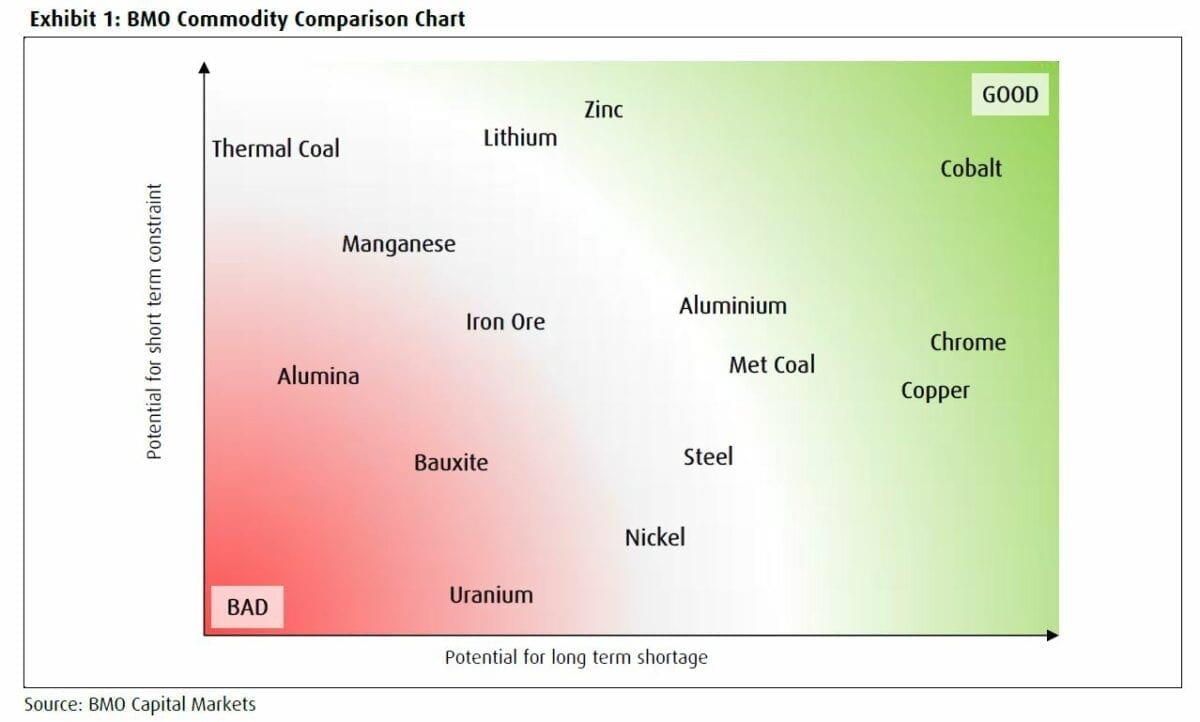 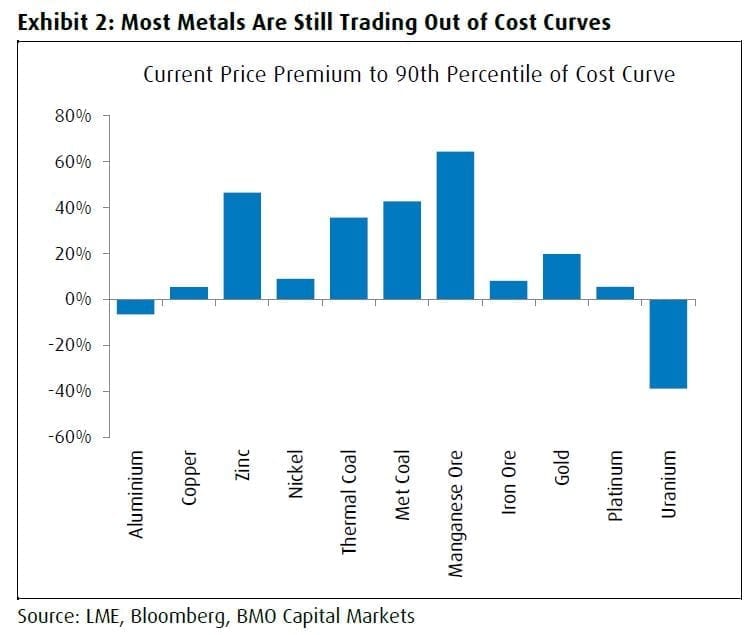 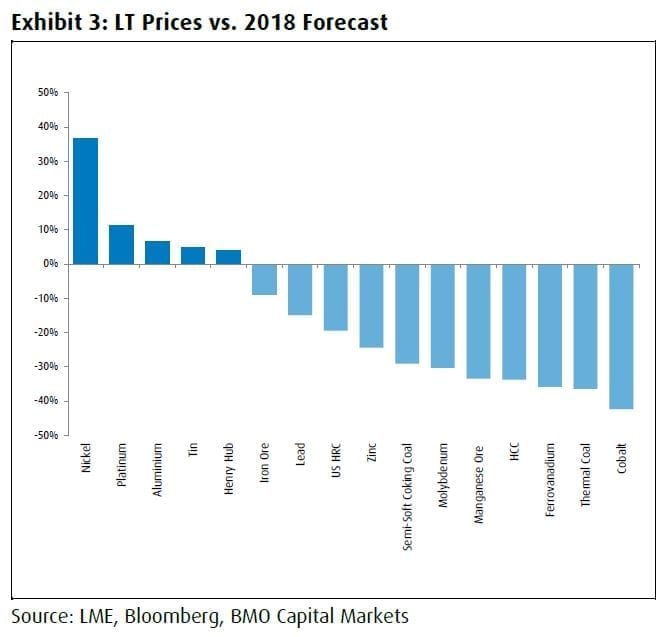