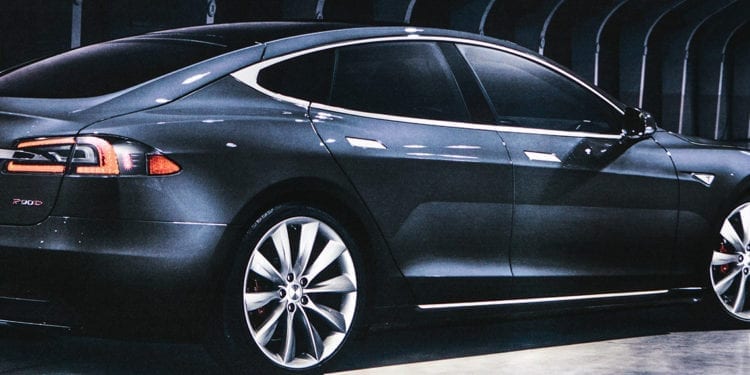 Tesla has given a rare indication of the relative proportions of the raw materials used in the new format 2170 cylindrical lithium ion battery cells for Model 3. Tesla has long been a proponent of nickel-cobalt-aluminium (NCA) technology developed by Panasonic in Japan, which goes against the grain of a nickel-cobalt-manganese (NCM) focused electric vehicle (EV) industry.

Tesla’s CEO, Elon Musk, stated yesterday that: “The cobalt content of our Nickel-Cobalt-Aluminium cathode chemistry is already lower than next-generation cathodes that will be made by other cell producers with a Nickel-Manganese-Cobalt ratio of 8:1:1″. The statement was to explain that Tesla’s batteries were drastically reducing their dependence on cobalt. Something which is true and been a long time in
development – 6 years to be exact, in a time period where from the Roadster to the Model 3, the EV producer has reduced its cobalt needs by 59% on average per vehicle.  Tesla’s first Model S consumed on average 11kg of cobalt per vehicle. Today, using a fixed pack size for a more accurate comparison, Tesla’s Model 3 consumes 4.5kg per vehicle. Musk’s second claim was to compare Tesla’s Panasonic developed cathodes to the holy grail of NCM competition, the 811 chemistry which auto and battery producers are focusing their R&D efforts on. It is a claim that suggest NCA technology has suddenly surged to become a low cobalt competitor to an 811 chemistry that is still to be commercially proven in EVs. The reality is that NCA has always been a low cobalt option for EV manufactures yet Tesla’s close relationship with Panasonic has meant the Silicon Valley-based company has dominated this market.

NCM versus NCA: Lithium Ion’s Fork In The Road

The EV industry is taking two paths for choice of lithium ion battery: NCA and NCM, of which the latter is by far the dominant choice with auto makers outside of Tesla and most recently, Toyota. Benchmark Mineral Intelligence has specialised in lithium ion battery supply chain data collection – which includes detailed cathode formulation research – since 2014 when the business was founded by industry specialists.

“Whilst efforts are being made to reduce cobalt dependency, the magnitude of growth in sales will far outweigh this.”

Benchmark forecasts that NCM batteries will make up 70% of the total global lithium ion battery market by 2026. NCA has been far less widely adopted and the main proponent remains as Tesla. NCA has always been a low cobalt format of technology, using around a 30% of the cobalt used in the original formulation of NCM technology, known as NCM 111 containing even proportions of nickel, cobalt and manganese. Since their inception, cathode and battery manufacturers have been working on reducing their cobalt dependency as this is the most expensive raw material input. With NCM, a number of formulations have been developed over the last 25 years, each with a lower cobalt intensity usage than the next.

The original NCM111 material has evolved into NCM523 (5 parts nickel, 2 cobalt and 3 manganese) and more recently, NCM622 (6 parts nickel, 2 cobalt and 2 manganese). The end game with this chemistry is to develop NCM811, to which Elon Musk’s refers to. However, this is still a number of years away from widespread commercial adoption due to lifecycle and safety concerns but will offer a lower raw material costs and improved energy density. In fact, Benchmark only expects NCM811 to have a material impact on the lithium ion battery industry from 2022 onwards when we forecast it to account for 10% of the cathode market. 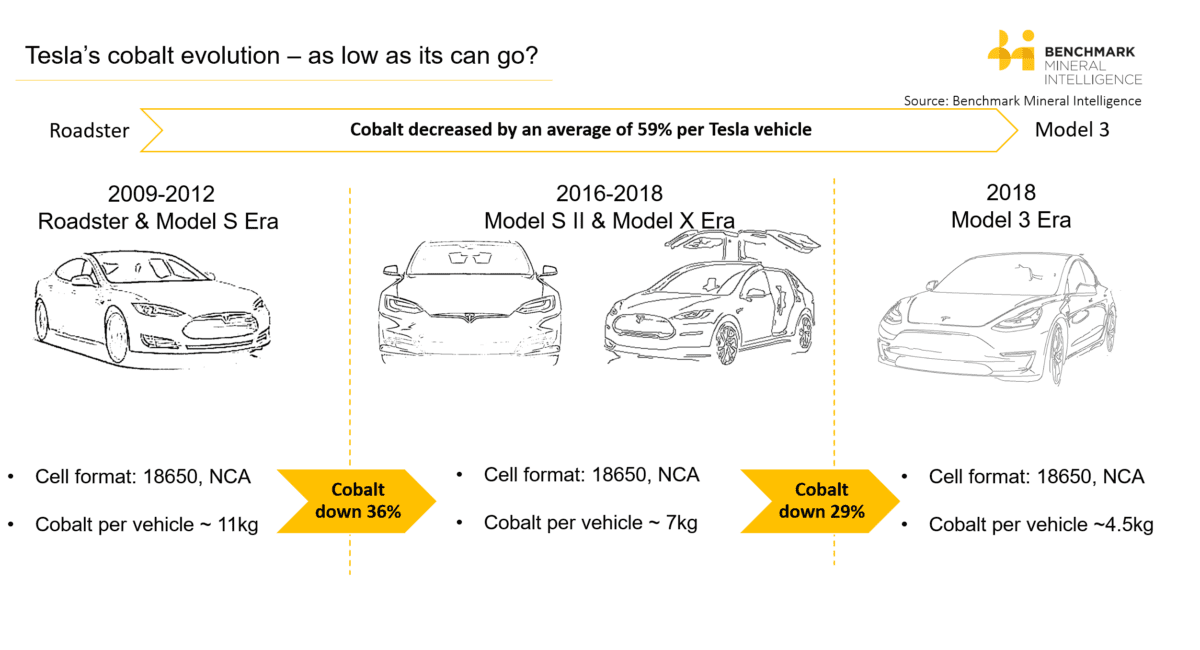 With NCA the lines are a little more blurred as the technology does not have the clearer raw material proportions that we are used to with NCM. Nonetheless behind the scenes, Panasonic, Tesla and their cathode suppliers have been working tirelessly to reduce their cobalt dependency, not only to push the cost of the battery down but also over supply security fears as the Model 3 ramp up begins. Tesla and Panasonic have made strong headway in reducing the cobalt reduction in its 18650 cells used in both the Model S and Model X. They have carried this momentum into the new 2170 Model 3 cell being produced at the Gigafactory 1 in Nevada. Benchmark estimates that from early formulations which date back to the 2012 Model S, Tesla has managed to reduce the cobalt usage on a pack basis by 36% on a like for like pack size between 2012 and 2018.

It was the development of Model 3’s 2170 cell which resulted in a further breakthrough in cobalt reduction, with Benchmark estimating that the new cell format a further reduction of cobalt at pack level of 29% whilst improving energy density at the same time. To compare Tesla’s cobalt consumption trend: fixing pack size across all Tesla’s vehicles (which takes an average), Tesla has reduced its cobalt consumption by 59% between 2012 and 2018. This is a huge achievement.

The End For Cobalt?

Panasonic and Tesla have made excellent improvements to their cell technology whilst being able to reduce cobalt dependency, but this is likely to pretty much be the end of the road of cobalt reductions in NCA. There is little room left for Tesla to manoeuvre and further reduce the cobalt in its cells. And with any new technology that could usurp NCA or NCM still on a 10-year horizon, cobalt’s use in lithium ion batteries is here to stay. Benchmark estimates that cobalt’s use in lithium ion batteries will triple between now and 2026 as a wave of EV demand engulfs the industry. Whilst efforts are being made to reduce cobalt dependency, the magnitude of growth in sales will far outweigh this.

To put this into a very short term context, Tesla expects to increase its vehicle production by 150% between now and June 2018 – and the biggest Model 3 increases are yet to come. Benchmark expects output to sharply rise from September onwards. This EV surge is far more significant than the reduction of cobalt intensity which is close to its limit. Whilst their is political scrutiny on the cobalt supply chain, there is a huge amount of work to be done to simply increase supply to meet our EV demands. More cobalt will be needed and the reliance on Democratic Republic of Congo as the primary supplier will increase.