Can Europe Become a Fully Integrated Lithium-ion Battery Player to Support the Growth in Electric Vehicles?

From manufacturing Electric Vehicles (EVs) to packing lithium-ion batteries and producing cells and battery components, China has been well ahead of the rest of the world during the last few years. However, Europe is finally joining the race to take second place behind the untouchable China. There are many positive indications of forward mobility by Europe, not just in terms of EV production, but also across the entire lithium-ion battery supply chain.

1. EV: Varied Forecasts but a Common Agreement – Growth is Rapid and Europe is Well Positioned

No matter which forecast you are looking at, global research, data, and consulting companies are all predicting a tremendous growth in EVs. China is clearly leading the race, but Europe is following suit and leaving other regions far behind.

In McKinsey’s base case scenario, global EV production will hit over 26 million by 2030. China is expected to add around 15 million EVs (56% market share), followed by Europe (26% market share) with almost 7 million, and the US with 3 million (12% market share).

Bloomberg New Energy Finance anticipates EV sales to surge to 30 million by 2030, and they see China leading with almost 39% of the global market in 2030. China will also lead on percentage adoption, with EVs accounting for 19% of all passenger vehicle sales in China by 2025. Europe is close behind at 14%, followed by the US at 11%.

No matter which projection you trust, the reality is that market participants are all seeing strong EV production and sales in the future; and Europe is one of the key drivers behind it.

2. Batteries: China to Remain the Leader but Investments in Europe are Spreading

Lithium-ion batteries are used for storage of electricity and are an indispensable technology to EVs. An exponential amount of lithium-ion batteries is therefore needed to keep pace with the rapid growth of this market. In order to be able to feed demand, battery manufacturers are building giant plants, or so-called “Mega” or “Giga” factories (>1 gigawatt hour capacity) enabling companies to drive costs down by increasing economies of scale.

Benchmark Mineral Intelligence tracks the number of Mega/Giga lithium-ion battery factories being built across the world. Gone are the days when only Tesla was building Gigafactories. Now Benchmark is tracking more than 42 mega factories across the world (see Planned Lithium-ion Battery Gigafactories by 2028), expected to reach almost 1,000 GWh by 2028, a huge leap from 135 GWh in 2017. This continued growth will not only be seen in Asia, the traditional dominant player for lithium-ion battery factories, but also in Europe (see Mega Battery Factories per region).

In Europe, it seems as though most of the investments in new battery capacity have been made by Asian-based companies, including Samsung, LG Chem, SK Innovation, and the like. However, some European-based organisations, such as Northvolt, are planning on building giga capacities on the continent. Tesla is also eyeing Germany as the site for its third battery plant (see map). 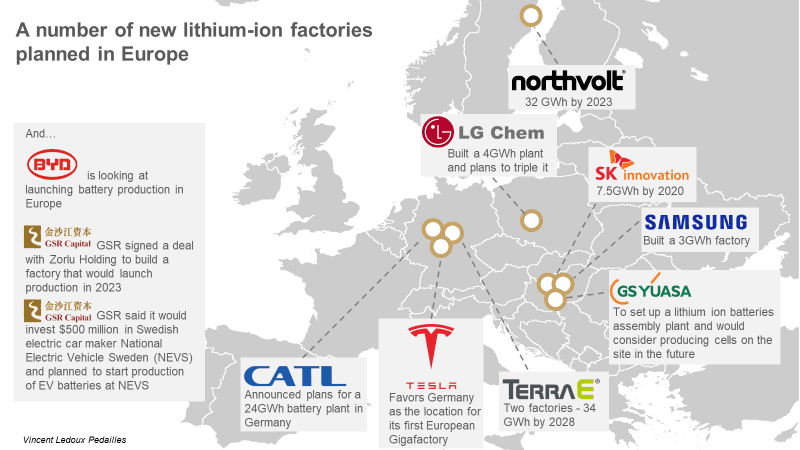 3. Cathodes – Still Shy but it’s Only a Start

Building large lithium-ion battery factories in Europe is an important step. However, back integrating production into cell manufacturing and cell components, such as cathodes, is equally important if Europe truly wants to be a major battery producer. At the moment, a large majority of battery components (cathodes, anodes, electrolyte solution, etc) are produced in Asia. The cathode is the costliest component in a cell, where a number of crucial materials are used, such as lithium, cobalt or nickel. Its production is dominated by China, followed by Japan and South Korea. Those cathodes and other battery components will be used in European factories, which means the batteries produced in Europe will not truly be a domestic product. However, Europe is starting to move towards building its own cathodes and other battery components. Umicore, BASF and Johnson Matthey have all announced plans supporting this strategy (see Cathode Investments in Europe). 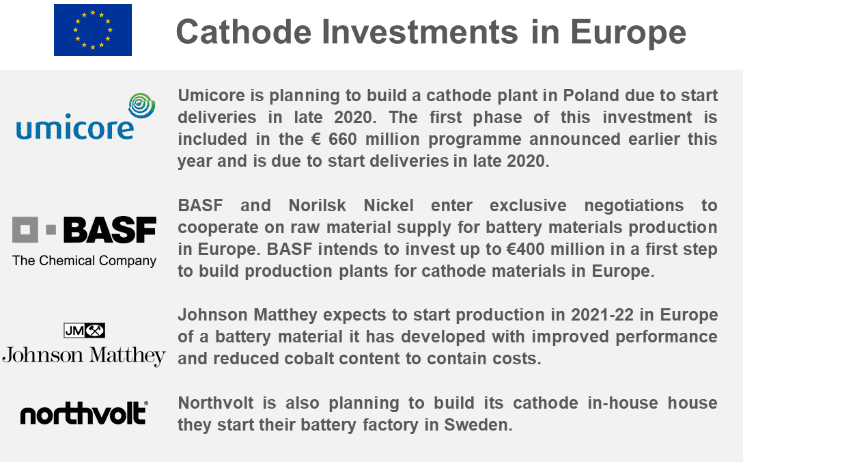 4. Lithium: The Only Missing Piece of the Puzzle

We can build EVs in Europe, we can fit them with battery packs and cells produced in Europe, and we will be able, in the future, to source cathodes domestically; but what about lithium, the only element in a lithium-ion battery that can’t be substituted?

At the moment, lithium feedstock is dominated by Australia, Chile, and Argentina, and lithium chemical production by China. In order to match demand, lithium supply would need to quadruple in less than ten years. Lithium production is difficult to bring on stream and there are still fears that sufficient volume will not be available for future battery demand.

The EU & Governmental Organisations want to develop Europe as a key region for the production of batteries and EVs, and de-risk its supply chain by having more domestic sources of raw materials, including lithium.
Producing lithium in Europe is important, but producing the right lithium grade for the battery industry is also vital. Lithium hydroxide has become the preferred lithium chemical for cathode manufacturers as they move towards nickel-rich cathodes such as NMC 622 & NMC 811. Lithium hydroxide demand is growing faster than lithium carbonate, and most of the recent investments in lithium chemical plants have been in lithium hydroxide production.

There are a few lithium projects in Europe including Keliber, European Lithium, European Metals, and Rio Tinto Jadar, among others. However, only a couple of projects are considering a lithium hydroxide plant. Infinity Lithium, a fully integrated project based in Spain, is one such example.

Making Europe a fully integrated player in electric mobility will be a long process but with the right strategy, sufficient investments and reliable partners, the region could become a cornerstone to a new, greener way of storing energy.

Manganese: No Longer Just an Input on Steel