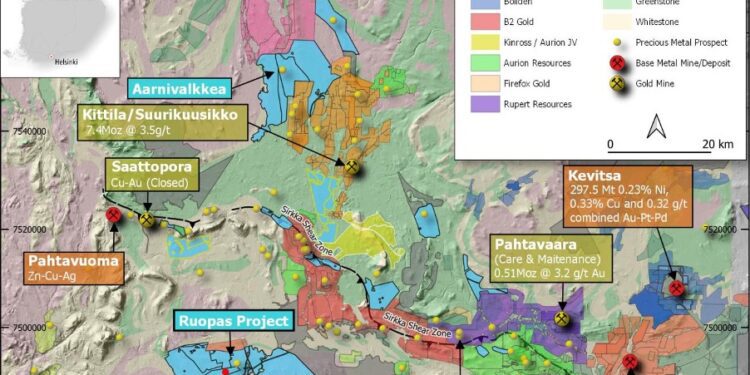 S2 Resources Ltd (ASX:S2R) has confirmed it is set to commence drilling of the Ruopas Isovaara nickel-copper-PGE target, located in the Central Lapland Greenstone Belt (CLGB) in northern Finland in the coming weeks.

As planned, the diamond rig currently drilling at Aarnivalkea will temporarily relocate to Isovaara to test a well-defined fixed loop electromagnetic (FLEM) plate.

This conductor comprises a large 280 metre by 240 metre plate plunging steeply to the northeast. It is coincident with a +6 kilometre long zone of anomalous copper and nickel identified in historic base of till (BoT) drilling by the Finnish Geological Survey (the GTK). The BoT anomaly sits on a regional linear gravity high, indicative of underlying mafic-ultramafic geology, not unlike the gravity high that contains the Nova-Bollinger and Silver Knight deposits in the Fraser Range of Western Australia.

CEO, Matthew Keane, said the company has been eager to test Isovaara since defining the FLEM target in May 2019, but was delayed by an individual objection to the grant of the Mining Licence. This objection was overruled by the Administrative Court of Northern Finland in March 2021, clearing the way for the current drill programme.

A geophysical crew is mobilising to commence a MLEM survey at the West Murchison project, within the Narryer Terrane along the Western Yilgarn margin in Western Australia. This area is considered prospective for magmatic nickel-copper-PGE mineralisation, containing interpreted ultramafic intrusions along the margins of the Yilgarn craton, which has a prolonged complex structural history.

MLEM will cover three interpreted mafic-ultramafic intrusions, commencing at the Woodrarung target, where mapping has identified outcropping ultramafic and mafic rocks that have intruded into a mixture of sedimentary and granitic gneisses.

Soil sampling by S2 has identified a coincident nickel-copper-gold anomaly with values up to 1,562ppm nickel, 550ppm copper and +50ppb gold with modest semi-coincident PGE anomalism up to 14 ppb combined platinum and palladium/

The Aubrey and Whitehurst targets have been interpreted from aeromagnetic imagery, with the underlying basement geology mainly obscured by recent cover (alluvial sediments, sand dunes and laterite), although limited outcrop of intrusive mafic has been observed adjacent to the magnetic high at Whitehurst.

The survey is expected to take six to eight weeks to complete with interpretations expected shortly thereafter.