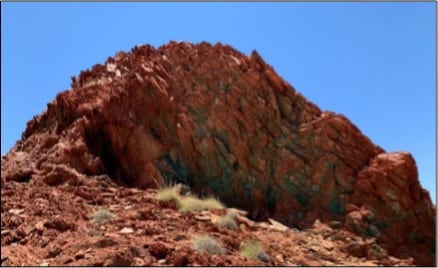 Rumble Resources Limited (ASX: RTR) has confirmed a new discovery with exciting results for the maiden RC drill programme completed at the Camel Hump Prospect located on the Braeside project in the Pilbara region, Western Australia.

Notably, no previous drilling had been conducted in the Camel Hump region highlighting the impressive nature of the first pass results.

A small shallow RC programme (eight drill holes for 455m) has discovered the significant widths of copper. Associated with the copper oxide mineralisation (RC drilling) was elevated zinc, lead and silver. Zinc returned up to 1200ppm, lead returned up to 1% and silver returned up to 6.7 g/t Ag. Results from the RC drilling include:

Some 30 km to the southeast of Camel Hump lies Rumble’s contiguous Warroo Project which hosts similar VMS lithologies with anomalous copper-zinc-lead associated with the volcaniclastics/sediments of the Warroo Hill Member Synform. The Camel Hump and the Warroo Hill Member lithologies lie within the same corridor with respect to strike and structure highlighting the potential for a significant new VMS province.

Rumble has a significant holding in the Fortescue and Paterson Provinces of the East Pilbara Region, Western Australia with over 2968 Sq kilometres of highly prospective tenure known for its large-scale Tier 1 discoveries which are continued to be made.