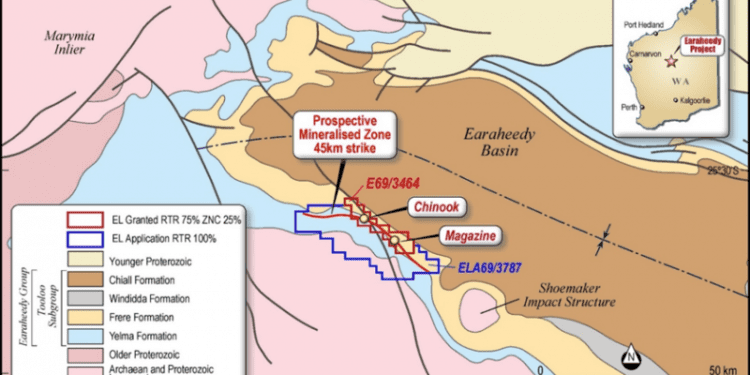 Four (RC drill-holes have confirmed wide zones of mineralisation and have significantly expanded the mineralised footprint at the Chinook discovery to 3km by 1.8km.

Managing Director, Shane Sikora, said Rumble’s Zn-Pb exploration target at the Earaheedy Project is between 100 to 120 million tonnes at a grade ranging between 3.5% ZnPb to 4.5% Zn-Pb. The potential quantity and grade of the Exploration Target is conceptual in nature. There has been insufficient exploration to estimate a Mineral Resource and it is uncertain if further exploration will result in the estimation of a Mineral Resource.

“It’s important to understand we aren’t infill drilling, and the key first step we are currently undertaking to advance the Chinook Zinc-Lead discovery consists of broad spaced, step out drilling into new untested areas looking to find the edges of the mineralisation,” Mr Sikora said.

“Once the boundaries of mineralisation are defined, drilling will then shift to focus on the inferred feeder structures containing near surface, higher-grade Zn-Pb-Mn-Ag mineralisation.

“What’s incredible is the scale unfolding at Chinook, which continues to showcase all the hallmarks of a large-scale, world-class discovery, with the mineralisation footprint expanded by this recent drilling from a previous 2km x 1.2km to an imposing 3km x 1.8km’s, and open in all directions.

“Not only have we expanded Chinook’s footprint, at this early stage of our ongoing 30,000m drill programme we have already uncovered some exciting new developments.

“On the south western margin of Chinook, previous drill holes indicated the oxide zone was depleted of mineralisation and was pinching out (daylighting), however in multiple drill holes we have now intercepted thick wide zones of significant oxide mineralisation with one intercept (true width) over 49m from only 18m of depth, opening up the entire south-western corridor for the possibility of large-scale, shallow oxide, deposit(s) to complement the potential for large scale, sulphide, open cut and underground deposit(s).

“On the north-eastern margin of Chinook, it was inferred the mineralisation would be getting deeper into the gently dipping basin, however the current drilling has highlighted normal faults have lifted the mineralisation on multiple occasions to open pittable depths, and is completely open. There are now five identified inferred higher-grade feeder zones on section AB.

“Just as impressive in an area with no previous drilling, our first hole 500m northwest of the previously northwesternmost drilling line intersected 50m of very significant widths of mineralisation. Of note, all drill holes are vertical and reported intercepts of mineralisation are true width.

“With each drill hole we gather more data, and our understanding of the geology of this very large sediment hosted base metal system continues to improve. This in combination with our geophysical targeting methods will enable us to zero in on the higher-grade feeder structures inferred to be contained within this very large body of mineralisation.

“Using these refined target generation methods will not only fast track the ongoing drilling and targeting at the Chinook discovery, they will also be valuable targeting tools to fast track potential new discoveries throughout the 45km’s of strike that remain untested at the Earaheedy Project.

“This in-depth understanding has been achieved with only 2,500m of the 30,000m planned drilling having been completed to date. When the second and third RC drill rigs arrive over the coming weeks the pace of the scoping drilling will really start accelerating, together with the commencement of the targeting of the inferred high-grade feeder structures.

“We are just at the start of unlocking this massive base metal system and already we have the confidence to increase the Exploration Range to 100mt – 120mt as a result of the growing mineralisation footprint. The potential of what we could ultimately uncover as we test the outer boundaries of the mineralisation and then start to focus on the inferred feeder zones hosting the higher-grade Zn-Pb-Mn-Ag mineralisation is extremely exciting.”

Ongoing RC and DD drilling has completed approximately 2,500m (combined) of a major 30,000m program at Earaheedy. Drilling at Chinook is currently focused on scoping out the overall potential size of the Zn-Pb-Mn-Ag mineralisation footprint. Once the overall scale of Chinook is delineated, drilling of the higher-grade zones will commence.

Results (multielement) for the first four RC drill holes include three drill-holes testing the up-dip oxide zone to the mineralisation and a single hole testing (sulphide) northwest 500m along strike from the previously reported northwestern most mineralisation.