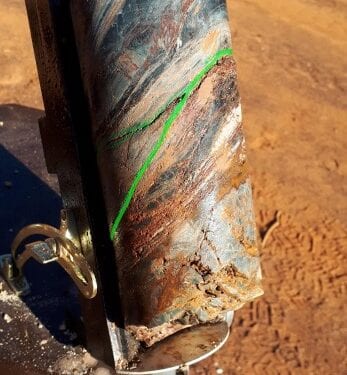 The latest assay results received by the company are for hole SSMH0100, a diamond drill hole designed to explore the western preliminary Whittle pit shell area for geotechnical investigation purposes. The hole was designed to test for interpreted NE structures that were postulated to truncate mineralisation.

An initial structural interpretation of SSMH0100 and surrounding RC holes highlights the potential for at least four close spaced NE structures in this area. In general, mineralised gold shoots are interpreted to be offset to the NE on the northern side of these structures. Interpreting where these structures are situated should aid in improving future drill targeting.

Managing Director, Shane Sadleir, said the eight diamond drill holes successfully explored a number of interpreted structures that Moho believes may be controlling the distribution of gold mineralisation at ESD. An understanding of the distribution of these structures has assisted field crews during the current RC drill campaign to identify and delineate them, which could lead to further gold mineralisation discoveries from assay results awaited from the Phase 2 RC drilling.

Phase 2 of the infill resource RC drill programne has now finished and assays are anticipated in January and February 2021 due to extensive delays at Perth assay laboratories.

This final drill programme of 45 RC holes (3,850m) was designed to infill the current resource drilling density at East Sampson Dam as well as test for mineralised extensions to the north and south where it remains open.