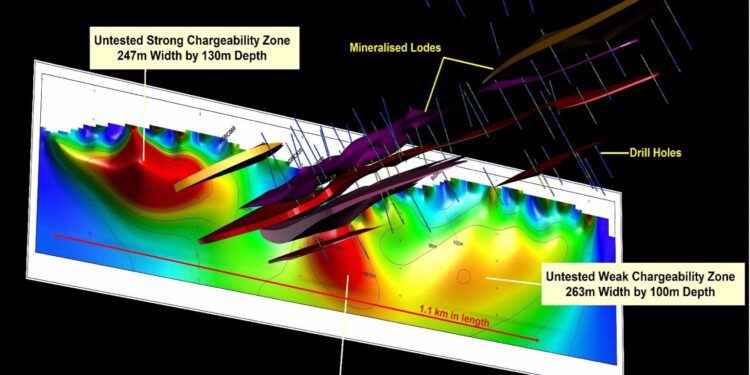 Reconnaissance Exploration At Historic Mine Will Commence During Second Quarter

The Spring Gully prospect is located near the town of Sofala 35km north of Bathurst NSW.

The resource has mainly been defined from shallow drilling and remains open along strike and at depth. The whole mineralised zone is contained within an alteration envelope consisting of chlorite-fuchsite within the Sofala Volcanics and clay-mica within the Chesleigh Formation. Both horizons are silicified.

The assay distribution through the thickest known section of the mineralised zone shows grade peaks (>2 g/t Au) immediately under the thrust contact between the Sofala Volcanics and the Chesleigh Formation sediments.

“These IP anomalies have direct correlation to the known gold mineralisation based on the historical drilling unknown to the previous explorers at the time. The interpretation from the geophysical responses suggests these targets may represent extensive sulphide-quartz bearing vein system.

“We have planned five RC drill holes to test the IP anomalies at depth. The western and eastern zones exhibit strong geophysical signatures which remain completely untested by drilling with the central zone potentially representing a large feeder zone to the known mineralisation.

“Subject to the results of the planned drill campaign, MinRex will look to increase the current resource tonnage and grade at the Spring Gully Prospect through follow up IP surveys and drilling. This represents a major leap forward in the companies systematic targeting process in defining new discoveries over the Sofala Project.”

The Spring Gully prospect is located 1.7 km east of Wattle Flat Township and which lies on the Peel Road between Sofala (6km to the north) and Bathurst (35km to the SSW) in New South Wales. The resource has mainly been defined from shallow drilling and remains open along strike and at depth.

The mineralisation is commonly associated with quartz-carbonate-pyrite-arsenopyrite veins which can provide measurable geophysical responses. Two historic induced polarisation (IP) traverses conducted by previous explorers at Spring Gull, one by RGC in 1994 and Altius in 2013.

The Western zone is dominated by a strongly chargeable flat lying chargeability anomaly semi coincident with elevated resistivity centred at 752250E. It appears to be fault bounded to the east and west as interpreted from the resistivity. It is situated within the Sofala Volcanics and correlates to a discrete magnetic response which may be contributing to the measured chargeability. SGRC066 is the closest drill hole located 50m to the east, which intersected 14m @ 1.41 from 26m depth. The anomaly is untested by drilling.

The Eastern zone is characterised by a broader semi coincident region of elevated chargeability and lower resistivity. This may represent a sulphide rich package within the Chesleigh Formation. Previous drilling (SGRG059 & 060) has tested the resistivity response and intersected weak gold mineralisation up to 0.2g/t. The chargeable feature has not been effectively drilled tested.

Based on the successful delineation of a defined chargable response from the known gold mineralisation at Spring Gully, MinRex will complete five RC holes, totalling 650m to test the Western, Central and Eastern IP anomalies.

Drill holes have been proposed to intersect the anomalies defined to determine their source. If successful additional IP surveys could be used to further target Spring Gully style gold mineralisation within the Sofala project.