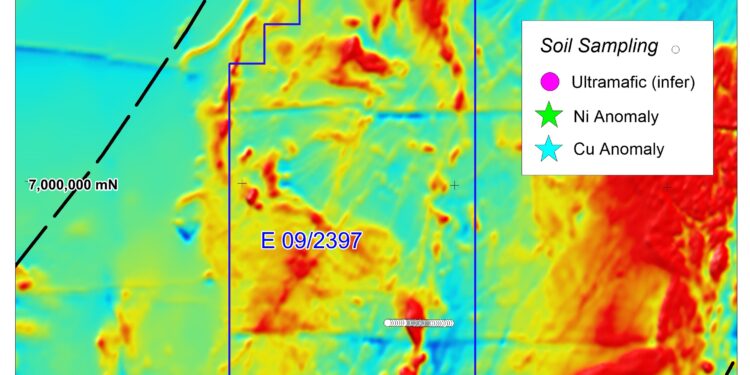 The HEM survey – which comprised a total of 2,200 kilometres flown on NW-SE oriented flight lines spaced 150m apart using the Xcite HEM system – was designed to locate EM responses that could reflect nickel-copper-PGE sulphide mineralisation similar to that found at Nova-Bollinger in the Fraser Range and at the new Julimar discovery north of Perth.

Three distinct EM anomalies were identified by the HEM survey with strong potential to reflect sulphide mineralisation as there are no obvious responses from conductive sediments (graphite) or conductive overburden (clays, salinity) in the surrounding area.

All three EM targets are strike limited and have mid-to-late time EM responses reflecting moderate to strong conductive sources. The targets are associated with magnetic anomalies that are thought to reflect ultramafic rocks, based on their magnetic signature and nearby soil geochemistry, which are considered favourable host rocks for nickel-copper-PGE mineralisation.

Background conductivity levels across much of the area were very low (except in areas of significant drainage), providing favourable ground conditions for HEM surveying. Computer modelling of the EM anomalies has been initiated and field reconnaissance over target areas, including detailed surface sampling, is planned to commence in August.

Ground EM surveys to optimise drill sites will be considered once results from the initial reconnaissance sampling programmes are available. The Morrisey Project, which is held under the Strategic Alliance Agreement (SAA) with a wholly[1]owned subsidiary of South32 Limited, covers an area of ~1,200 sq. km and extends for a strike length of ~80km along the north-western margin of the Yilgarn Craton within the high-grade metamorphic Narryer Terrane of WA.

It was initially secured to cover magnetic targets indicative of mafic/ultramafic host rocks in a similar tectono-stratigraphic setting to the Julimar (and possibly Nova-Bollinger) discoveries, which highlighted the untested nickel-copper-PGE potential of the western margin of the Yilgarn Craton.

“The next phase of field work will involve mapping and sampling of the target areas, including possible ground EM surveys in order to prioritise the targets for drilling,” he said.

“We are hopeful that the targets can be drill tested later this year, pending consultation with South32 and the availability of drill rigs.

“The Morrisey Project is based on analogies that we have drawn with the new Ni-Cu-PGE discovery at Julimar and the well-known nickel-copper prospectivity of the Fraser Range Belt, where discoveries were made using the electromagnetic method,” he added.