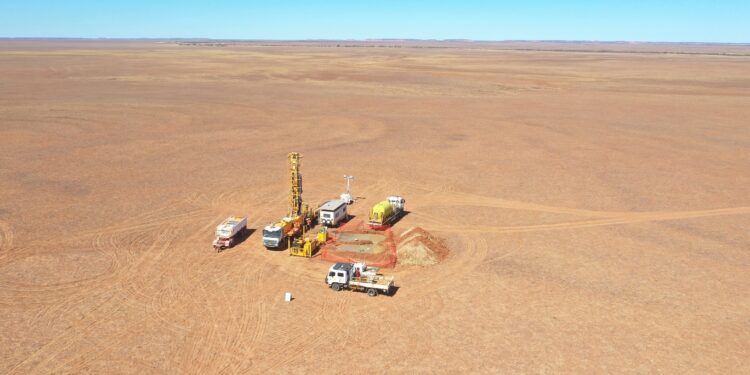 Assays have confirmed the presence of mineralised banded iron formations (BIFs) similar to those hosting the Osborne copper-gold deposit (global resource ~36Mt @ 2% Cu, 1g/t Au), located approximately 70km to the north. The mineralised BIF stratigraphy is associated with two distinctly different alteration styles – one involving multiple pathfinder elements within an envelope of sericite and potassic alteration (HMDD012), and the other within a thick (~190m) strongly carbonate-altered sequence (HMDD015) where the BIF stratigraphy is much thicker (~60m) and pathfinder elements are moderately elevated.

Drill-hole HMDD012, which is located within the southern magnetic complex, was positioned to test an isolated magnetic target adjacent to an earlier drill-hole which had intersected strong sericite and potassic alteration.

This association of highly anomalous pathfinder elements occurs within the BIF stratigraphic package over a down-hole length of approximately 22m from 396m down-hole (Figure 1), highlighting the potential for further (stronger) copper mineralisation to be located nearby.

Drill-hole HMDD015, which is the first hole drilled into the northern magnetic complex, tested a coincident magnetic and gravity response. Assays from this hole reported highly anomalous copper (up to 8,200ppm Cu), plus elevated gold (to 0.175ppm Au), bismuth (to 6.3ppm Bi), selenium, sulphur and LREE values within a thick (~60m) BIF sequence from 396m down-hole.

This increase in thickness is thought to be caused by folding, highlighting the potential for preferred structural trap-sites to be located nearby.

Down-hole electromagnetic (DHEM) surveys have been planned within drill-holes HMDD012 and HMDD015 to test for sulphide mineralisation up to ~200m from each drill- hole. These surveys are scheduled to commence around the middle of August subject to crew availability and will take approximately 6-10 days to complete. Off-hole conductors identified by the DHEM surveys will be targeted for further drilling.

Assay results from drill-holes HMDD013 and HMDD014, located within the central portion of the southern magnetic complex (Figure 1), were less anomalous in metals than the other drill-holes, but did confirm the presence of strong carbonate alteration within the magnetic complex. A DHEM survey of drill-hole HMDD014 will also be completed as part of the DHEM program (drill-hole HMDD013 is blocked and cannot be surveyed).

The Hamilton Project covers a belt of magnetic rocks extending over a strike length of approximately 30km from north to south under Eromanga Basin cover, which varies from ~190m thick in the north to ~220m in the south.

Numerous magnetic targets within this belt have never been tested by drilling.

“We are now looking forward to seeing the results from the down-hole electromagnetic surveys, which should help us to optimise drill targets within both the southern and northern magnetic complexes,” he said.

“This work is close to getting started and hopefully it won’t be too long before we have results to report.”

Financing the Future of Decarbonization: An Investor’s View

Financing the Future of Decarbonization: An Investor’s View