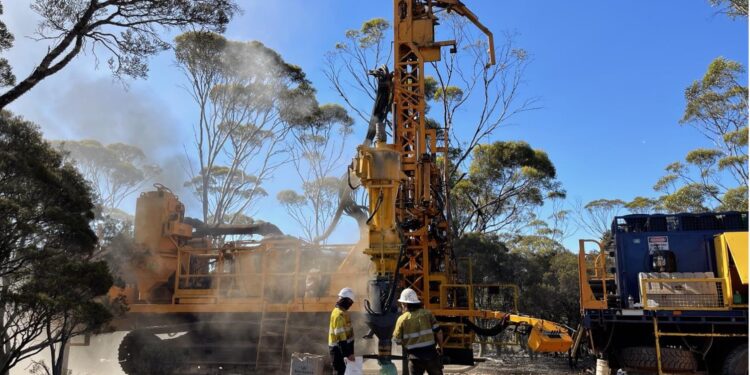 Aruma Resources Limited (ASX: AAJ) has kicked off the first-phase of drilling at the Mt Deans Lithium-Tantalite Project (P63/2063) in the Goldfields region of Western Australia.

The Project sits within the lithium corridor in south-east WA, which hosts multiple significant hard-rock lithium projects. It is interpreted to sit within the same host rocks and structures as the significant nearby Mt Marion, Bald Hill and Buldania Lithium Projects.

Drilling is now underway after all requisite approvals were graned and site preparation works completed.

The first phase of drilling at Mt Deans is planned to comprise approximately 3,000m of reverse circulation (RC) drilling to a depth of up to 200m (in pegmatite), with holes spaced approximately 50 metres apart.

Drilling is designed to confirm the presence of a thick pod of pegmatite interpreted from convergent dips seen in historic drilling, and to intersect an interpreted pegmatite chamber or ‘cauldron’ (Figure 3).

The program uses a track-mounted fully self-contained RC Rig (Figures 1 and 4), which required minimal site preparation and will help ensure the smallest disturbed footprint around the drill target areas. Results will be released as they become available.

Aruma views the Mt Deans Project as being highly prospective for lithium minerals, as wells as tantalum and rare earth element (REE) minerals. Previous exploration has identified swarm pegmatites over a strike length of 1 kilometre.

High-grade rock chip samples have previously been reported from the Project area, with lithium oxide results as high as 2.1% Li2O, and tantalum (Ta) as high as 555.9ppm Ta2O5 (tantalum pentoxide) plus other rare earth elements