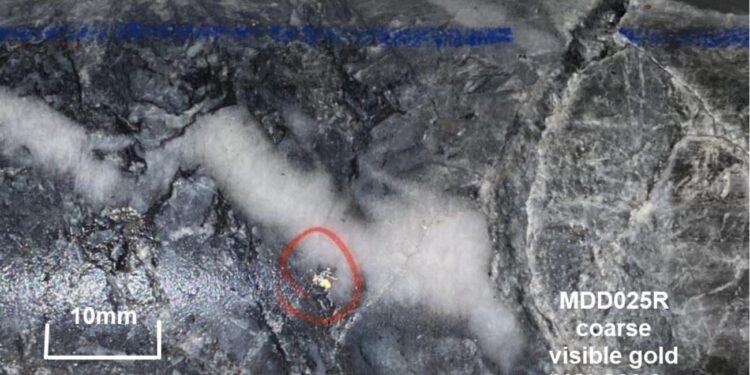 Drilling has continued since September 2021 to extend mineralisation down plunge at RAS. The latest results from MDD022 confirm continuity of mineralisation previously reported in MDD020, MDD021R.

Intercepts in nine of 11 DD holes extend mineralisation a further 420 m down plunge from MDD014 with an average aggregate thickness of 30 metres with a simple drill hole intercept length weighted average grade of 2.25 g/t Au. The grades now being intersected are significantly higher than those reported in the 2021 MRE.

“With two drilling rigs operating a total of three drilling shifts per 24 hours, we are both extending the drill hole coverage down plunge at the RAS structure and filling in some important gaps in our drill pattern. The results of this work continue to define the shape and grade as well as extend this mineralised body,” Executive Director Dick Keevers said.

“Since this work has clearly defined a NE extension of the RAS deposit, our MRE needs to be updated to include this additional down plunge extension, which will be drilled for at least a further 300m down plunge to reach the Shepherds Creek topographic low, with drilling now in progress.

“When the new MRE is completed later this year, we expect a substantial increase in Resources, which, including Resources already defined at CIT and SHR, may confirm our current reasoned vision of more than one million ounces of gold in these Resources.”

Resource drilling on nominal 120 metre by 80 metre centres over the three-month period from September 2021 has extended RAS shoot mineralisation to 420 metres north down-plunge beyond the 2021 MRE.

All drillholes (other than MDD012 and MDD017 that appear to close off the shoot to the west) show mineralisation consistently occurring within the RAS shoot over a vertical interval of 40-80 metres. Concentration of gold is in the 10-20-metre-thick Hanging Wall Shear (HWS) with grades of 1-7 g/t Au.

Mineralisation is also in high-grade stockwork zones below the HWS with individual bonanza grades to 57.5 g/t Au as in the 13 metres at an average grade of 12.6 g/t Au intersected in MDD016.

The RAS shoot has now been defined over 1000 metres down plunge from outcrop. Currently drilling is testing continuity of mineralisation a further 300 metres northwards as well as defining the eastern margin.

DD Drilling at RAS, accelerated from early October 2021 with 24/7 drilling, was further accelerated on January 10, with another DD rig added. A total of 10,086 metres have been drilled since the present campaign commenced in November 2020 with 4,564 metres completed after those for the September 2021 RAS MRE.