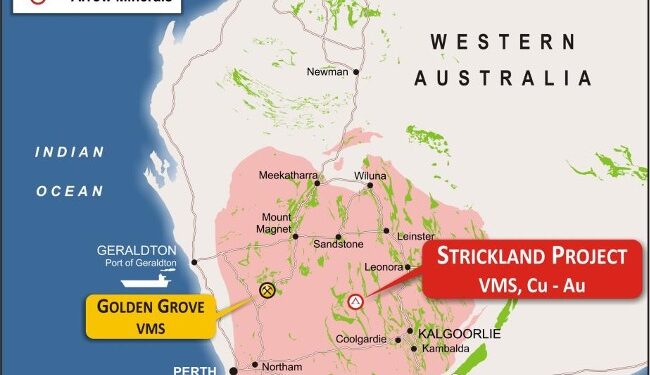 Arrow applied a combined approach of reverse circulation (RC) drilling in conjunction with downhole electromagnetic (DHEM) geophysical surveys to identify the presence of sulphides related to a mineralised VHMS system, both within and proximal to the drillholes.

Assay results returned from samples collected at STKV009 highlighted a zone of elevated copper, 20m at 0.22% Cu, from 120m downhole. The anomalous copper zone is in close association with the modelled DHEM conductor Plate 1.

This confirms the conductance response is related to copper sulphides.

The major off-hole conductor, modelled as Plate 2, has an area 12 times larger and a conductance 100 times greater than that of Plate 1. This large area of elevated conductance coincides with the significant EM anomaly, T-08B, identified by the earlier SkyTEM survey.

A spatial association is observed between the major DHEM conductor, Plate 2, and an extensive geochemically anomalous zone of copper, >400 ppm, derived from several phases of shallow drilling executed in the area.

The company believes it has defined a significant geological, geochemical and geophysical coincident target that lies just beneath the extent of the current drilling.

Managing Director, Howard Golden, said Arrow is now evaluating the Strickland Project land package to identify similar coincident geochemical and geophysical signatures that would form the basis for the next phase of work. When completed Arrow will rank and prioritise all targets available to the company to ensure resources are deployed to advance the highest ranked targets with priority.

“The outcomes of Arrow’s latest programme at Strickland have increased our understanding of the mineralised geological system that we identified there,” Mr Golden said.

“We collected and evaluated data systematically using multidisciplinary exploration techniques. This has resulted in the development of an exciting target with geochemical, geophysical and geological traits that suggest the presence of a major mineralised system.

“We are now moving into the planning phase for the next round of work at Strickland and evaluating a number of potential options to advance the project.”

Gladiator On The March With Bendoc Gold Project Drilling Programme

Gladiator On The March With Bendoc Gold Project Drilling Programme