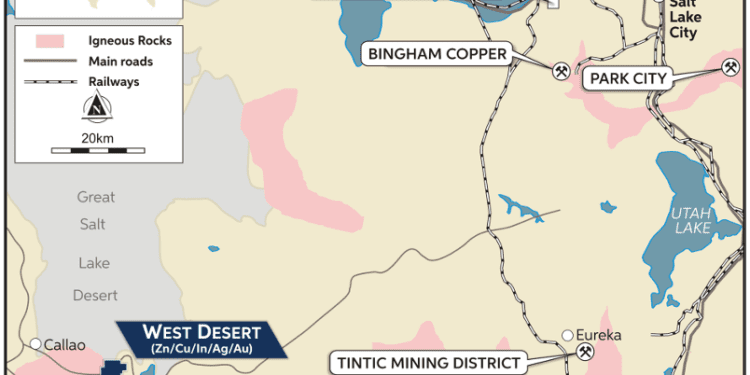 American West Metals Limited (ASX: AW1) has received positive results from a recent gravity survey that was completed over the West Desert Project in Utah, USA.

The gravity survey was the first of its type completed over the West Desert Project area and was designed to image the known deposit – a large historical and foreign resource (Ni 43-101 compliant) of over 59Mt, including a higher-grade core of approximately 16.5Mt @ 6.3% Zn, 0.3% Cu and 33g/t In – and porphyry system, and identify new focus areas for exploration.

Managing Director, Dave O’Neill, said significantly, the West Desert Deposit presents as a distinct gravity anomaly in the data, with multiple other similar anomalies – in areas with little to no drilling – also recorded in the survey data.

“The recent gravity survey over the West Desert project area has produced outstanding results. Based on geological similarities of West Desert to other mineralised porphyry systems in the region, we anticipated the potential for further targets,” he said.

“The high-resolution gravity survey has successfully mapped the geological architecture of the district and identified prominent gravity features that are interpreted to represent further zones of skarn and carbonate replacement deposit (CRD) mineralisation.

“These results give us added confidence that further drilling will expand the already large West Desert resource and add a number of new discoveries.

“The survey defined a 6km East-West corridor with multiple anomalies that look identical to the CRD dominant portion of the West Desert Deposit. Two of these anomalies have been clipped with a historical drill hole and those holes encountered high grade copper-zinc-lead mineralisation.

“Additionally, some of these anomalies are also located beneath historical zinc-lead-silver mine workings.

“CRD type deposits, similar to those present at West Desert, are known to occur in clusters, so we are understandably very excited about the upside of the area.”

The gravity survey was the first of its type at the Project and was designed to test the response of the existing mineralisation of the West Desert Deposit, and to screen the near-mine area for similar features.

The survey included a total of 1,537 gravity stations, with the station spacing of the immediate deposit area at 100m, and the greater Fish Springs area with 400m spacings.

Given the high and often variable relief over the project area, topographic surveying was performed simultaneously with gravity data acquisition, and terrain corrections were applied on the data. A small portion of the stations could not be collected along the steeper slopes.

The survey is interpreted to have successfully detected the CRD dominant and lower skarn portion of the West Desert Deposit. This part of the orebody is largely stratiform and contains massive lenses of coarse-grained sphalerite, chalcopyrite and pyrite/pyrrhotite within ferromagnesium skarns and replacement bodies hosted within carbonates and shale.

The gravity data has highlighted multiple anomalies within a 6km long East-West corridor that appear identical to the West Desert feature. These anomalies are located in compelling geological locations, including an offset to the known orebody, and along the contacts of the porphyry where similar deposits could be expected to form.

Importantly, a number of these anomalies are situated in areas where historical drilling has intersected zinc-copper-lead-silver rich mineralisation.

Outside of the immediate deposit area, a significantly large and strong gravity anomaly was identified in the northern part of the project area and partly within newly staked land. The anomaly is located at the very northern end of the Fish Springs Range, in a semi-circular topographical low, where the range slopes off onto the Great Salt Lake.