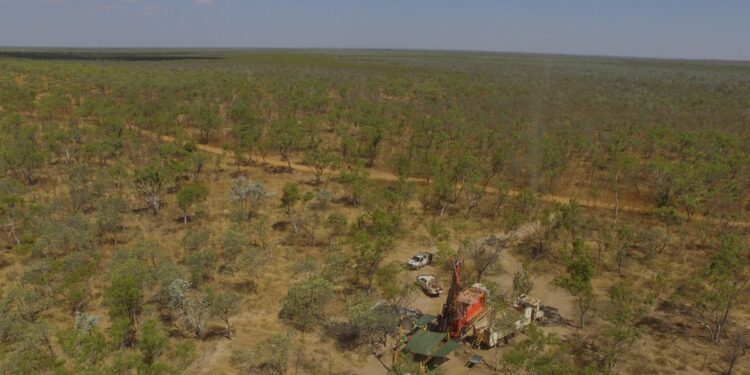 Two extensive geophysical surveys were completed over the 400km2 Walford Creek Project area in May and June 2021. The airborne magnetic survey was conducted at 100 m line spacing and 30 m survey height. The ground-based gravity survey was completed at a grid spacing of 400 m by 400 m. In areas which generated interest, the grid spacing was further reduced to either 200 m by 400 m, or 100 m by 100 m. These datasets were processed during July.

The interpretation of the results has provided exciting new insights into the potential for further extensions to the already substantial Walford Creek Mineral Resource Estimates. The much higher resolution achieved in the new data has revealed a number of structural features which were previously poorly defined in the historic, wide-spaced geophysical datasets.

The datasets further refine the geophysical signatures of the Vardy, Marley and Amy zones where strong correlations exist between the known presence of mineralisation and the modelled geophysical response.

New conceptual target areas have been identified which are now set to be tested by drilling over the coming months:

Managing Director and CEO, Dr Fred Hess, said the new gravity and magnetic datasets have provided powerful insights into the extensions of the Fish River Fault and identified substantial gravity anomalies in Walford Dolomite below the Py3 in Vardy and Marley.

“The Walford Creek mineralisation has to date been defined over approximately 10 km of strike length adjacent to the Fish River Fault,” Dr Hess said.

“In the Vardy, Marley and Amy zones, Mineral Resource Estimates are already defined which have the potential to support an initial 14-year mine life, as evidenced in the recent Revised Scoping Study for Walford Creek.

“The increased resolution and coverage of the new geophysical datasets demonstrate the potential for the Walford Creek resources to be substantially larger than currently delineated.

“We plan to immediately turn our focus to testing these new targets, starting with the Vardy Lower Walford Dolomite whose upper sequence had previously been drill penetrated revealing chalcopyrite mineralisation.

“The new data also sheds light on the previously unsuccessful attempts to extend the highest-grade intersections within the Amy zone further to the west. The potential splaying of the fault to the south-west suggests an explanation and opens up a new avenue for further exploration.

“The Walford East target area is extensive. Previous scout drilling at the western margin of this area had identified mineralisation within similar stratigraphy. With the benefit of our enhanced geophysical knowledge, the delineated structures in this “Dog Leg” area can now be tested with more targeted drilling.

Discovering a New Workforce May be Mining’s Biggest Issue

Discovering a New Workforce May be Mining’s Biggest Issue