You would almost certainly have heard a lot about lithium of late. Whether it’s related to high-profile entrepreneur Elon Musk and his lithium-ion battery initiatives, his Tesla electric vehicles (EVs), or the numerous mentions that lithium-ion batteries receive in the media related to new-age energy generation and storage, lithium is certainly a conversation-starter. But many investors however know very little about vanadium…

Returning to lithium, its price rise (refer to graphic above) has been spectacular and is directly correlated with the expansion of renewable energy over recent years, especially wind and solar. One of the largest issues with wind and solar energy sources is the need to store and release the electrical energy produced. Lithium fulfils this storage role in its use in lithium-ion batteries. Vanadium however is an energy option that I believe we should be watching more closely, as it is utilised in a promising storage technology known as vanadium redox flow batteries, which will boost overall demand for vanadium. We’ll discuss this more in a moment.

In supply terms, the three largest vanadium-producing nations at present are China, South Africa and Russia. Vanadium is currently produced as a by-product of steel-smelter slag, but it is also mined in two different types of mineral deposits – disseminated in carbon-rich deposits and shales, as well as in magnetite (iron oxide) deposits alongside titanium. 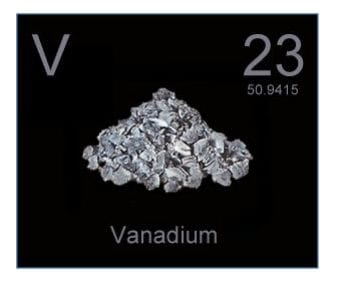 Vanadium’s main use at present is as a steel additive in high-strength steel, which accounts for about 92% of the current global demand of ~100,000t of contained vanadium (~180,000t V2O5 equivalent). Vanadium is used in the creation of metal alloys that withstand extreme conditions, such as those used in jet engines. Around 5% of vanadium’s usage is in catalysts and chemical applications.

The Real Opportunity For Demand Growth Is In Energy Storage

Lithium-ion batteries have taken the lion’s share of the energy storage market so far, however technological advances in flow batteries are both bringing down costs and improving their safety and environmental profile. Compared to lithium-ion batteries, vanadium redox flow batteries (VRB) are non-flammable, environmentally friendly, have estimated life-spans in excess of 10,000 cycles and maintain 90% of their capacity over 20 years, thereby lowering the total cost of ownership. By comparison, getting 1,000 cycles of use out of a lithium-ion battery with full depth of discharge would be ambitious. VRBs are ideal for “grid-constrained” solar and wind-farms that currently struggle to sell their electricity at times of peak production, but find other forms of storage to be uneconomical. Furthermore, VRBs boast a longer continuous discharge run time (6-10 hours versus 2-5 hours) than lithium-ion batteries. The downside however for VRB is their relatively lower round-trip efficiency (measured by power out over power in) of 70% compared to 85% with lithium batteries. From a cost perspective, Tesla’s current battery costs are estimated to be ~$150 to ~$200 per kilowatt-hour – well below the industry average pack costs of ~$350 per kilowatt-hour – and could reach its <$100 per kilowatt-hour target in the intermediate term as Gigafactory production ramps up.

By comparison, the VRB cost is slightly behind the curve at $300/kWh to $500/kWh – however these costs are half of what they were three years ago and are set to come down further. VRB can be stacked up to increase storage capacities, whereas lithium-ion storage capacities are somewhat boxed-in by initial design. Unit cost for large-scale VRB goes down, whereas it goes up for lithium-ion batteries. This means on a large-scale deployment, VRB is already likely competitive with lithium-ion batteries today.

The cost of energy storage is, roughly, the up-front capital cost of the storage device, divided by the number of cycles it can be used for. If a battery costs $100 per kwh and can be used 1,000 times before it has degraded unacceptably, then the cost is one tenth of a dollar (10 cents) per cycle. This compares with the cost of base-load power generation from wholesale natural gas electricity from a new plant, which costs roughly 7 cents per kwh (not including the cost of carbon emitted).

Enhancing The Reliability Of Base-Load Power

Batteries won’t compete with base-load power generation alone. Batteries deployed by utilities allow them to reduce the use of (or entirely remove) expensive peaker plants, which only run for a few hours a month. They allow utilities to reduce spending on new transmission and distribution lines that are (up until now) built for peak load and which sit idle at many other hours.

In a world with batteries distributed close to the edge, utilities can keep their transmission lines full even during low-demand hours, using them to charge batteries close to their customers – and thus cutting the need for transmission and distribution during peak demand.

So by combining VFBs with renewable energies such as wind and solar, inherently intermittent energy supplies can be regulated from moment to moment, allowing the grid to balance the amount of energy being put into the wires with the demand arising from consumers. As a result, VFBs make for a new and growing demand for vanadium. Annual production is ~180,000t V2O5 equivalent. Vanadium is used in the creation of metal alloys that withstand extreme conditions, such as those used in jet engines. Around 5% of vanadium’s usage is in catalysts and chemical applications.

Vanadium metal price charts are not readily available to the public, so I have provided ferro vanadium price trend information as it is a good proxy to the vanadium metal price. Vanadium accounts for between 30% and 50% of the cost of VRB, making it essential for VRB manufacturers to secure vanadium supply. Billions of dollars have poured into VRB research and development over the course of the past decade, with inevitable mass utilityscale VRB adoption.

Thus, I believe the long-term vanadium price outlook is promising,  which will inevitably generate increased interest in companies that explore for and produce vanadium metal.

The three companies are quite distinct in terms of their respective levels of project advancement. TNG is the most advanced having completed a Definitive Feasibility Study (DFS) on its large Mt Peake vanadium deposit in the NT; AVL is in the process of enhancing the resource base at its Gabanintha deposit in WA, whilst KRC is looking at a Scoping Study on its Speewah project in WA.

I’ve provided a brief introduction on all three companies, with more comprehensive research to follow in due course.

TNG is the most advanced, focused on its Mt Peake vanadium-titanium-iron project, about 80km northeast of Alice Springs in the NT. Deposit was discovered in 2008, currently hosts a JORC Indicated Resource comprising 160Mt grading 0.28% V205, 5.3% Ti02 and 23% Fe. The DFS completed in 2015 projected a pre-tax IRR of 41% based on a pre-production capital cost of A$970M, total estimated life-of-mine net cash flow of A$11.6B and operating cash flows of A$13.6B over an initial 17-year project life. Strategically located close to existing infrastructure, including Alice Springs-Darwin Railway, Stuart Highway and the new LPG pipeline, 20km to east.

The most modestly capitalised of the three companies, KRC is undertaking a vanadium concept study on its 100% Speewah project in WA. Total combined resources measure 4.7Bt at 0.3% V205, 2% Ti02 and 14.7% Fe. Study is examining production from the high-grade zone of the central vanadium deposit at Speewah. Major objective is to identify whether new hydrometallurgical approaches can provide a lower cost, lower risk-base framework for a new scoping study.

Baby Steps Into The New World Of Battery Investing