By Department for Energy and Mining, South Australia

South Australia covers almost one million square kilometres and has a proven pedigree in mining and exporting resources to 30 countries worldwide. Results of new geophysical surveys confirm frontier areas are prospective for a diversity of mineral commodities.

For more than a decade, minerals have accounted for a third of South Australia’s exported goods complemented by the State’s agriculture, food and wine exports (see fig.2). Miners operating in South Australia clocked a respectable A$4.42 billion in production value from copper, hematite, magnetite, gold, uranium, silver, lead, zinc and industrial and construction materials in 2017/2018 (see fig.3). Copper is the mainstay – with exports typically accounting for 15-20% of State exports. Production of copper totalled about 261,684 tonnes in 2017 from the Prominent Hill, Olympic Dam and Kanmantoo mines. Major copper mining producers have collectively invested more than a billion through 2017 to expand existing mines and open new mines. South Australia is also home to three major mineral processing facilities. Nyrstar has redeveloped its Port Pirie operations into an advanced multi metal processing and recovery facility. Midway through the first year of a two-year ramp-up, Port Pirie is on track to be one of the world’s largest lead smelting facilities, third largest silver producers and supplier of zinc fume, copper cathode, gold ore and sulphuric acid. UK-based GFG Alliance purchased the Whyalla Steelworks in 2017 as part of an acquisition of the former Arrium assets. With an initial production capacity of 1.2 Mtpa of steel, produced from iron ore deposits in the nearby Middleback Ranges, the company is working through transformation plans to maximise its plant capacity and integrate its Australian assets into GFG’s global operations. Olympic Dam has an onsite integrated smelter and refinery producing high purity copper, gold, silver and uranium concentrate. 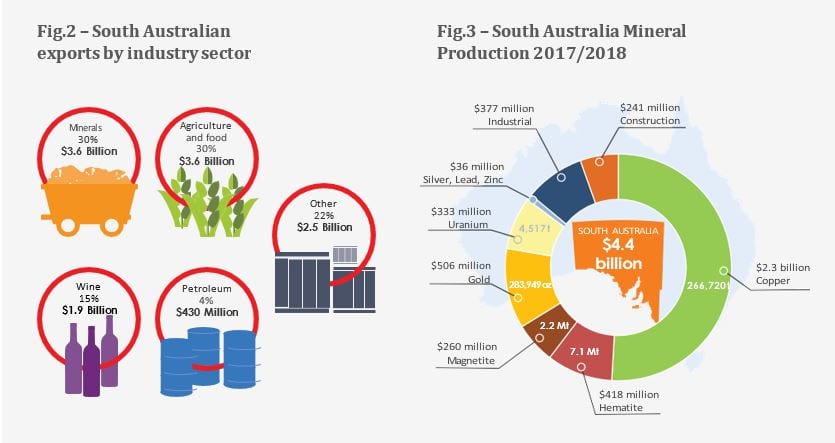 South Australia is at the centre of Australia’s road, rail and port logistics, providing time and cost advantages to key markets in China and across Asia. Well-planned supplies of affordable industry land are linked to strategic infrastructure and transport corridors. An advanced manufacturing technology and research base, and world leading companies in the defence, food and wine, resources, information and communications technology sector are supported by excellence in higher education, research, skills and vocational education and training.

South Australia’s frontier areas have attracted $55.2 million in exploration across 700 exploration licences held by about 180 companies in 2017-2018. The past year has seen an uptick in exploration. Copper has attracted the largest share of exploration investment and resource upgrades have been lodged across all commodities with standout results in gold, uranium and graphite. Exploration programs have highlighted nickel- copper potential in the Musgrave and Coom-pana provinces. Recent announcements point to opportunities for investment partners:

Additional 2017 exploration results are catalogued in the Mineral Exploration in South Australia 2017 report and Industry News, available at energymining.sa.gov.au.

Regarded as South Australia’s Copper Belt, the  iron oxide-copper-gold geology in the Gawler Craton is crowned by the world-class Olympic  Dam project, now in its 30th year of production. Olympic Dam has a name plate capacity of 235 000 tonnes of copper a year and it is undergoing an expansion into its Southern Mine Area supported by a major smelter upgrade and investment in surface infrastructure. As a multi-generational mine, Olympic Dam is a powerful indicator of the potential of the Copper Belt. Ranked as the world’s fifth largest copper deposit, the world’s largest uranium deposit with substantial occurrences of gold and silver, geologists are yet to determine the deposit’s limits. The Gawler Craton also hosts the Prominent Hill copper gold mine, which came on line in 2009 and is forecast to continue production until the late 2020s. OZ Minerals’ other significant asset in South Australia, the copper-gold Carrapateena mine, is due to begin production in 2019. Carrapateena is expected to add a potential 65 000 tonnes of copper a year to South Australia’s copper production. Potential lies ahead to further grow nearby copper assets such as the Khamsin project and Freemantle prospect.

High-quality deposits have already been  identified and successfully mined in the Gawler Craton, but a statistical anomaly suggests a substantial discovery gap remains to be filled (see fig.4). 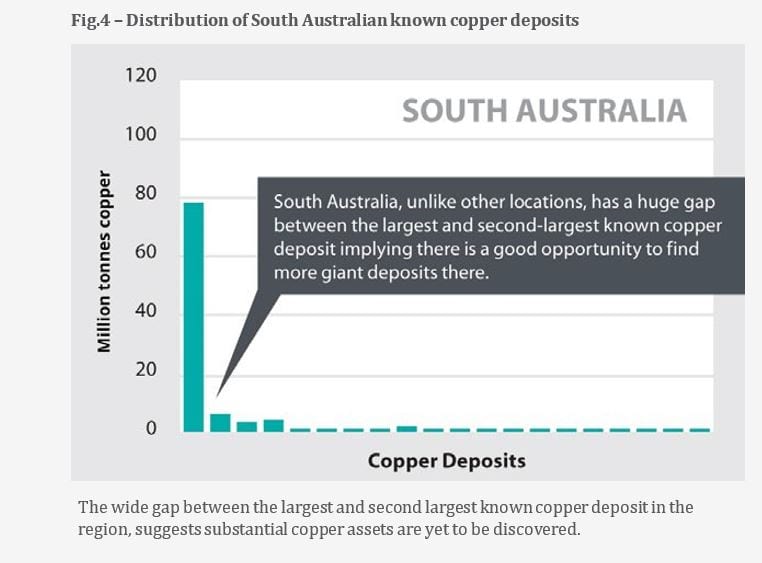 The desire to step up the discovery rate and close the inventory gap has spurred the Geological Survey of South Australia to conduct the world’s largest airborne survey. Undertaken across some 320 000 square kilometres – nearly a third of the state – the Gawler Craton Airborne Survey has generated high resolution magnetic, radiometric and digital elevation data, meticulously collected over two years. Knowing the depth of prospective rocks is the first order determinant of exploration. In a value-add for explorers, the Gawler Craton Airborne Survey partnered with CSIRO to use the data to model the depth of hundreds of individual magnetic sources in prospective magnetic basement. A year-long process of disseminating this new information has already begun, saving companies the cost of first-stage modelling and providing greater certainty on the depth of potential economic targets on their tenements. The early results from the Gawler Craton Airborne Survey, together with the national AusLamp Magnetotelluric work, can enhance 3D exploration undercover and point the way to new exploration targets.

With high-quality prospects concealed from early explorers by extensive cover, South Australia has focussed on stimulating new green field exploration. The Geological Survey of South Australia joined with national collaborators in a five-year effort to open up the 200,000 km2 Coompana Region, one of the world’s least understood geological provinces. The $8 million effort combined a suite of proven and novel methods to yield stunning new technical insights that reinforce the value of precompetitive data to foster investment in new greenfield exploration. Spurring industry interest has been the identification of geological conditions that are prospective for copper, nickel and platinum group minerals, zones prospective for copper-gold deposits, and hot spots prospective for lucrative specialist metals niobium and tantalum, along with rare earths. The work has shown the depth to basement is not as deep as previously thought, putting the region within the economic reach  of explorers. Detailed studies confirm rock suite units analogous to known prospective areas, including Giles Complex equivalent intrusive rocks that can be prospective for copper, nickel and platinum group elements as known in the Musgrave Province.

Rolling out the red carpet for explorers

The new South Australia’s Drill Core Reference Library located within the Tonsley Innovative District embodies the State’s welcoming approach to explorers. Embracing new technologies, the modern asset serves as an irresistible invitation to the world’s best and most active explorers to unlock the economic potential of South Australia’s resources. The flagship facility is an incubator for exploration companies to collaborate and break new ground in better targeting exploration by accessing its vast core drill core and sample collection. They can also take advantage of the latest digital platforms – even bringing to life geological settings in the 3D-immersive theatre. SARIG, the South Australian Resources Information Gateway, is in the world’s top-ten as a digital platform, enhancing explorers’ efforts to find new assets. SARIG’s “big data” now provides more than 600 interactive maps and data views, delivers state’s geoscience information, vast knowledge data banks from previous exploration efforts, as well as vital information on mining and exploration projects, tenement, infrastructure, environment and land access arrangements, and mining resource data. An interactive dashboard showcases the breadth of key commodities and opportunities across the state, which can seamlessly generate a map of corresponding projects and mines. The South Australian Government supports research capabilities and has supported the new Mineral Exploration Cooperative Research Centre – MinExCRC to advance the success of exploration under cover by delivering more productive, safer drilling methods that enable cheaper and faster drilling. A further focus is to bring forward technologies that can readily collect data during drilling programs to aid agile decision-making and further derisk exploration. The new collaboration will build on previous successes such as the launch of the RoXplorer coiled tubing rig.

Pathways to invest in exploration

The three principal investment options for entering the South Australian exploration sector are either by direct tenement ownership, joint ventures with companies actively exploring in South Australia or by holding direct shares in Australian exploration companies. The South Australian Government can introduce potential investors to suitable exploration companies or advisors to assist with due diligence and acquisition processes. After an economic discovery, small and mid-tier companies may seek investors  or project partners to provide funding for project development and implementation. The Department  for  Energy  and  Mining can assign a dedicated case manager to significant projects to provide a single point of contact to a company or investor and a coordinated approach to interactions  and  the  assessment  processes.

South Australia has built a formidable exploration and resources development jurisdiction, coming into its own as investors look for stability and strength.

Australia’s Mineral Industry and the ASX

Australia’s Mineral Industry and the ASX