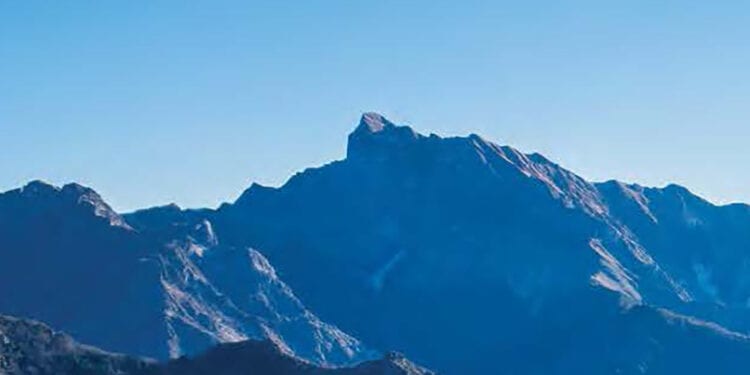 Since the beginning of life on earth 540 million years ago or the beginning of the Cambrian, there have been five mass extinctions recorded, (Fig. 1). The rate of growth of biodiversity was flat over the first four events up until about 200 million years, the end of the Triassic period. Since that period, the rate of growth has been increasing despite the last extinction event, which occurred ~66 Ma ago, which is also known as the Cretaceous-Tertiary (KT or KPg) boundary. It infamously annihilated the nonavian dinosaurs.

Figure 1: Changes in biodiversity since life began over 540 million years ago due to mass extinctions, Source: By SVG version by Albert Mestre – Phanerozoic Biodiversity

The growth in biodiversity on Earth since the KT boundary is paralleled in the Canadian junior mining sector. Although, the number of mining companies listed on the main board of the Toronto Stock Exchange (TSX) is reasonable, there are ~1,000 companies listed on the TSX Venture (TSXV) linked to the mining sector, which far exceeds that of any other industry, (Fig. 2).

Figure 2: Major industries and the number of issuers in 2018 listed on the TSX and TSX Venture in Canada, Source: TMX Money and Exploration Insights 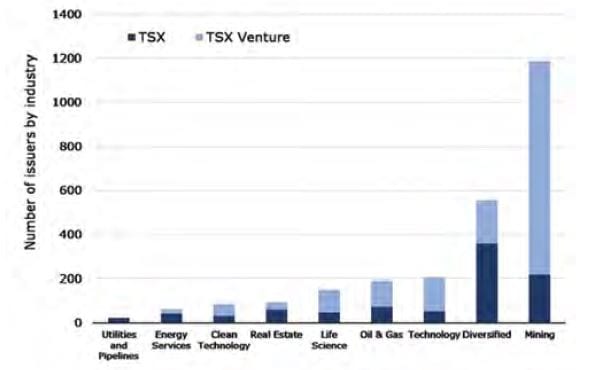 The TSXV, in particular, attracts the majority of “would-be” junior mining entrepreneurs, promoting companies with an average market cap of C$15-20 million. Out of the 55 initial public offerings (IPOs) by mining-related companies on the Toronto exchanges during 2018, the majority (45) were on the TSXV.

The listing requirements for a junior mining company that is not in production are not particularly egregious. The company only needs to show it has enough to fund a C$200,000 work program over the next 12 months or so, and another C$100,000 in unallocated funds as a minimum requirement for a Tier 2 listing (Fig. 3).

Any ecosystem, including the equity markets, has limited resources available for its inhabitants. Given the elevated financing risk, the funds may not be available to keep them all as a going concern.

The mining sector has been disproportionately turning to equity financings as a source of funding, compared to other industries. In 2018, 65-70% of all financings (>1,200) emanated from this sector with the vast majority (85-90%) sourced from juniors listed on the TSXV.

Figure 3: Requirements to list a company as a Tier 1 [in production] and Tier 2 [pre-production stage] issuer on the Canadian exchanges, Source: venturelawcorp.com 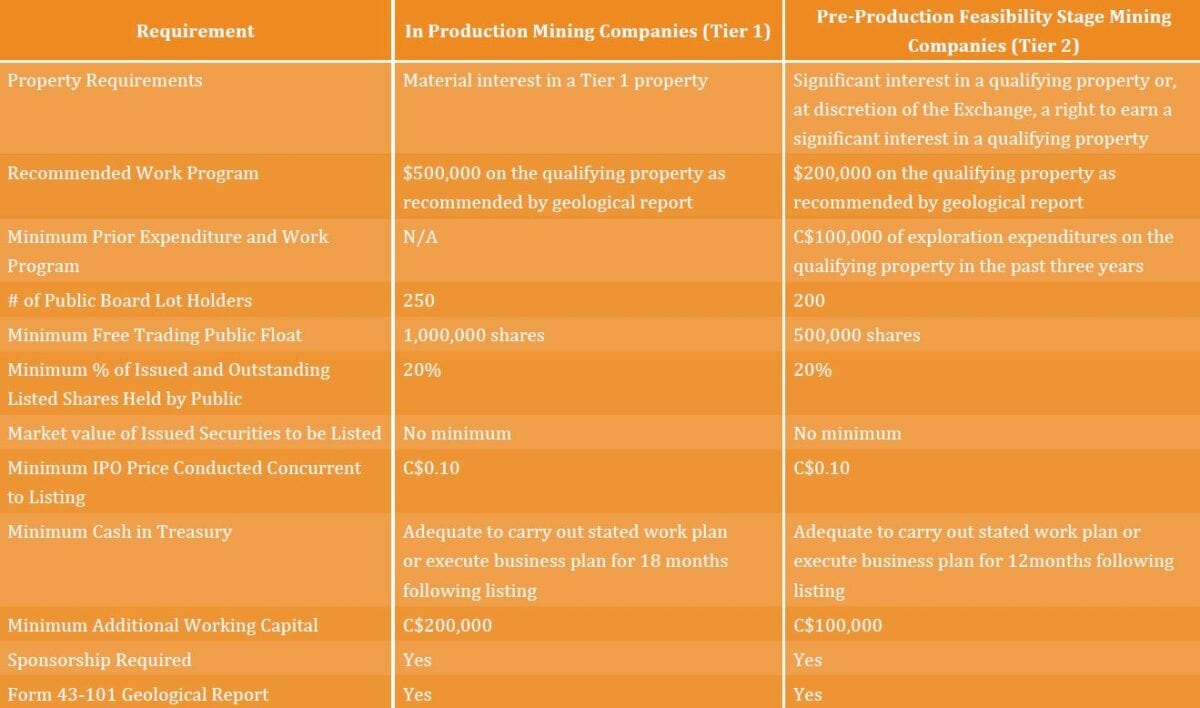 “A change in the investor focus from active to passive institutional equity funds over the past several years may be the asteroid we are looking for.”

Figure 4: Major industries and the number of equity financings in 2018 conducted on the TSX and TSX Venture in Canada, Source: TMX Money and Exploration Insights 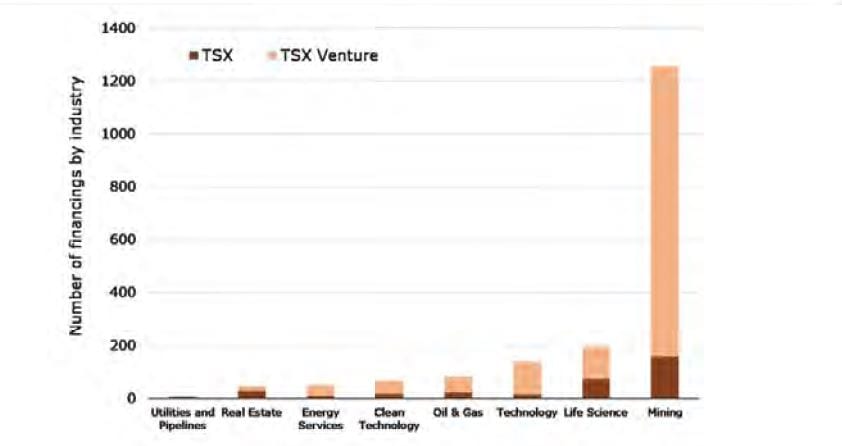 Figure 5: Capital raised through equity financings by major industries in 2018 conducted on the TSX and TSX Venture in Canada Source: TMX Money and Exploration Insights 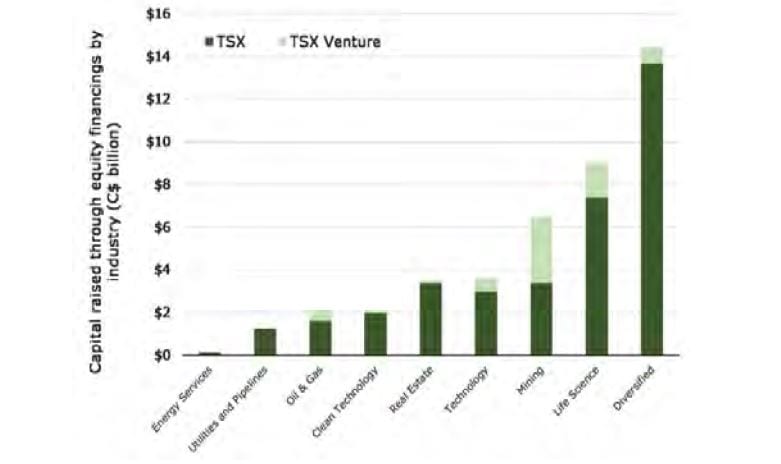 Figure 6: The iridium-rich layer of fine-grained sediments that marks the Cretaceous-Tertiary boundary and the mass extinction event that led to the demise of the dinosaurs and ammonites Source: Quora 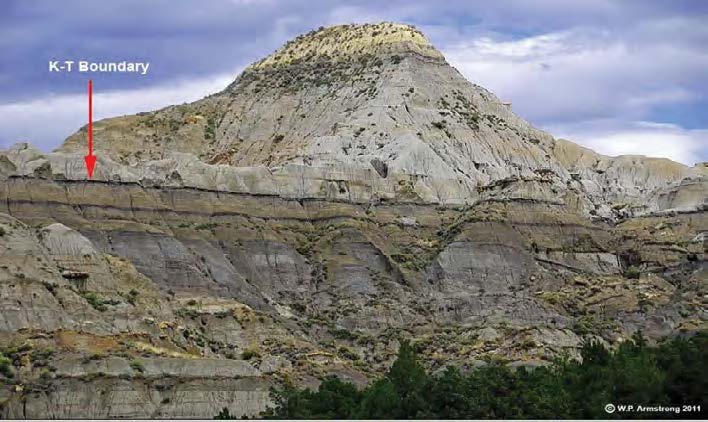 The Cretaceous-Tertiary (K-T or K-Pg) Boundary is ~66 million years old and globally marked by an extraterrestrial body (asteroid) that ranged from 10 to 15 km across, which hit the earth on the edge of the Yucatan peninsula (Chicxulub Crater). The extinction of the dinosaurs, among others, is closely linked to a thin layer of sediment-rich iridium, which is rare on earth but abundant in asteroids. A recent discovery in North Dakota (Tanis) may depict an entire ecosystem affected by the catastrophe.

A similar scale extinction event may be required in the junior mining sector to direct funding to the serious players. A change in the investor focus from active to passive institutional equity funds over the past several years may be the asteroid we are looking for.

Near the beginning of the decade, the vast majority (94%) of the funds (US $55 billion) invested in the precious metal sector were actively managed with only 6% directed to passive funds such as exchange-traded funds (ETFs) like the GDX or GDXJ, (Fig. 7). The actively managed funds would not only trade shares on the exchange but also participate in equity financings.

Figure 7: Change in assets under management from 2011 to 2018 with respect to actively and passively managed funds Source: CIBC, Van Eck Fund and Exploration Insights 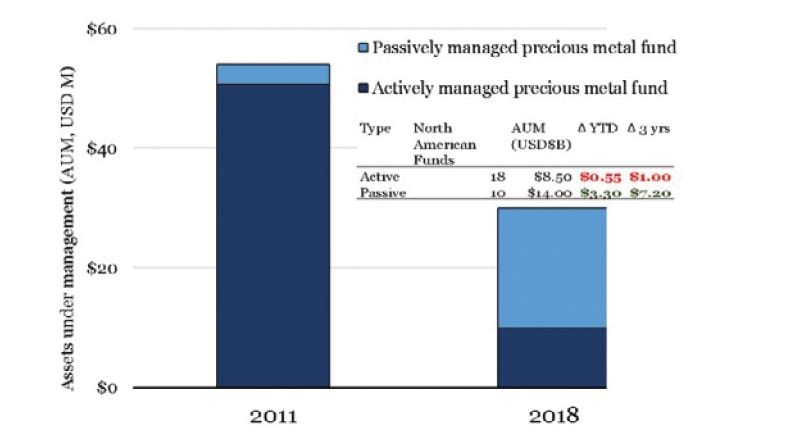 Figure 8: Equity financings [number of financings versus total proceeds,C $ M] in the mining sector over the past decade Source: Macquarie, Financial Post Datagroup 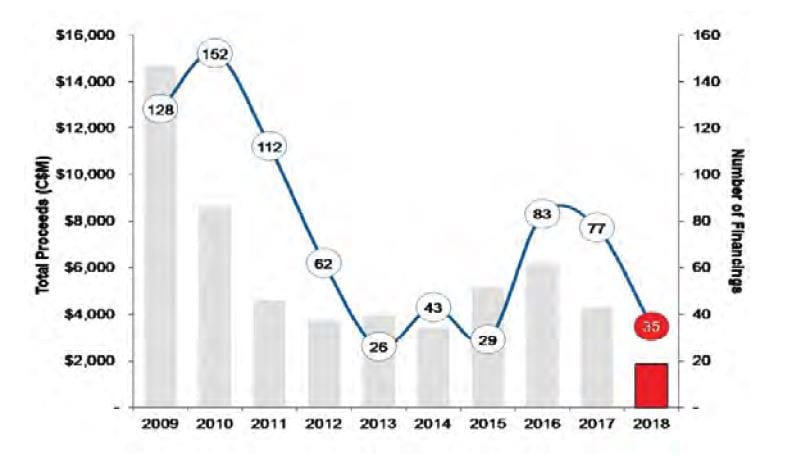 Currently, active funds represent about a third of the total assets under management (AUM US $30 billion). Therefore, not only has the total AUM pie shrunk, the slice allocated to actively managed funds has fallen by 80% to US $10 billion.

The generalists who like the leverage to the gold price that equities provide prefer to diversify their risk by investing in ETFs that provide high liquidity, anonymity and more trading flexibility. The only option to compete against the ETFs is for companies to parallel their traits and offer sustainable dividends. The struggle to be relevant to generalist investors may have driven the recent spate of ‘mega-mergers’ in the gold sector.

The impacts of the majority of funds being directed to passive funds are reflected in financing trends. Total proceeds from equity financings in the mining sector peaked i 2009 at over C$14 billion (128 transactions), averaging well over C$100 million per transaction, (Fig. 8). The peak was followed by a protracted trough between 2012 and 2015 before rising to C$6 billion (83 transactions, >C$70 million average) in 2016. Last year saw the lowest amount of money raised (C$2 billion, 35 transactions, < C$60 million average) over the past decade.

While the mass extinction event at the K-T or K-Pg boundary eliminated three-quarters of the Earth’s plant and animal species, including the non-avian dinosaurs and ammonites, (Fig. 9), it provided evolutionary opportunities for other species. 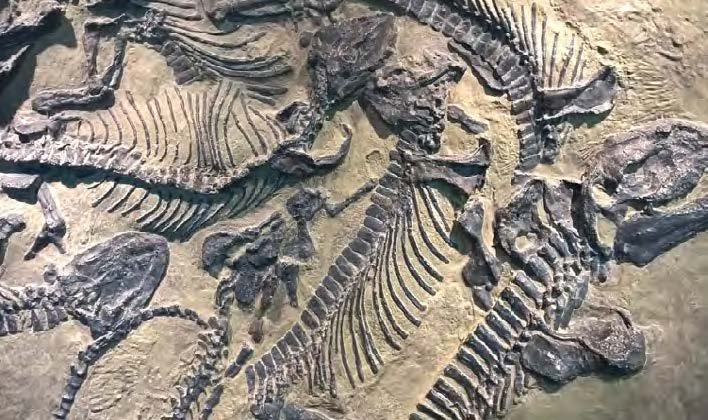 The question is how is the mining sector adapting to the new financial ecosystem and what are the new species?