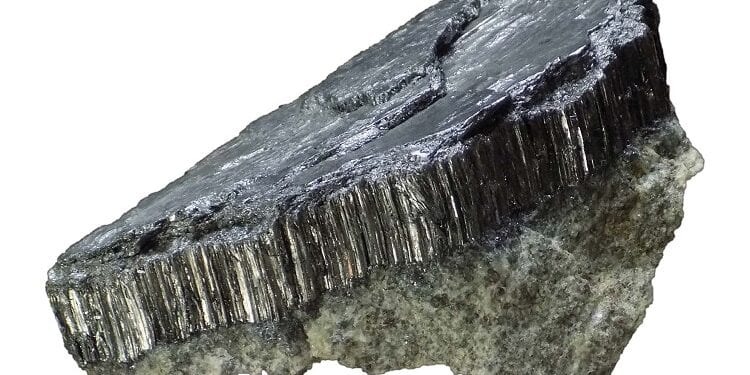 “The key to everything is patience. You get the chicken by hatching the egg, not by smashing it.” – Arnold H. Glasow

Over recent years, many investors have been positioning themselves in anticipation of an impending
boom in the electric vehicle (EV) industry. Essential commodities such as graphite and lithium have been at the forefront of market attention, given their importance as key inputs in the lithium-ion batteries used in EV production.

As recently as a year ago, many bullish experts were predicting that graphite prices would escalate steadily into the 2020s in response to strong demand for both EVs and the production of fire-retardant building cladding. However, the reality for graphite prices, as well as other battery minerals, has been quite different.

What we’ve witnessed is that market sentiment has shifted from a bullish demand outlook to heightened concerns about oversupply.

After peaking in 2012, graphite prices experienced a long, slow decline due to a combination of a slowdown in the Chinese economy and a lack of growth in western economies. During the second half of 2017, prices showed some life and increased by between 30 to 40 percent due to an improving steel industry, environmental-related production problems in China, and continued strong demand growth from the lithium-ion battery industry.

Since then, however, prices have retreated, influenced to a significant degree by the commissioning of the new, large-scale Balama mine of Syrah Resources in Mozambique. Incremental production from this mine could be described as ‘too much, too soon’ with respect to the emerging EV market. By contrast, it was not that long ago that many market watchers and company promoters were forecasting that the world would require another 4.5 projects of the scale of Syrah’s flagship Balama operation just to meet anticipated demand.

In the minds of many investors, Syrah has been the go-to graphite story, with its ambition of being the industry’s first large-scale primary graphite producer. Its Balama project was once billed optimistically in some circles as being the ‘Saudi Arabia of graphite’ due to its vast resource size. However, the production reality has been something quite different, with the Balama mine in operation for just two years but being cashflow-negative since its commissioning, operating at just 50 to 60 percent of design capacity.

Syrah has battled to establish profitability in the face of lower graphite prices, production downgrades, and an oversupplied market. It is, therefore, a relevant reminder to others in the graphite industry and the broader mining sector that it’s not primarily about size – it’s about scalability, profitability, and being able to meet customer expectations. It’s also about being able to weather price downturns and make money throughout the cycle.

The key factor to consider here is that the graphite industry is still evolving in terms of new-age applications like high-end batteries, and complexities within the industry in terms of battery end-users and their unique product specifications. Graphite producers need to ensure that they have a market for their product before progressing down the project construction route.

Syrah’s issues have also impacted upon the broader graphite sector, affecting the share prices of other graphite hopefuls. There is a general perception amongst investors that all graphite producers will face the same production issues as Syrah, which isn’t necessarily the case.

By comparison, many emerging players have structured their projects to be more scalable and have developed close relationships with specific end-users. They are also working hard to differentiate their graphite product in terms of its quality and suitability to specific end-user applications. 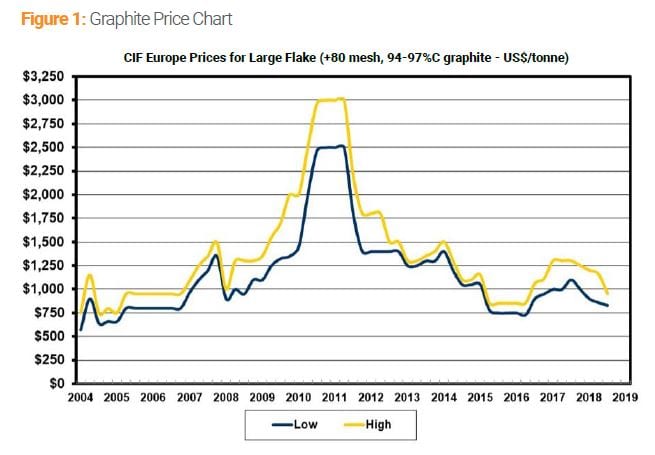 There’s no doubt that the graphite industry is challenging at present and the reasons are varied. Syrah has highlighted a significant build-up of inventory in the Chinese market, which is now impacting price negotiations and contract renewals. As a guide, prior to the end of 2017 China imported less than 1,000 tonnes annually, but by mid-2019 this figure had grown to in excess of 22,000 tonnes.

The depreciating Chinese yuan against the US dollar as a result of trade war tensions also hasn’t helped, as it has applied downward pressure on USD-denominated pricing negotiations with Chinese customers. The net result has been a slide in the weighted average price for natural flake graphite, from USD 457/t in the June quarter to around to USD 400/t currently.

Nevertheless, there is reason to be optimistic about the future of graphite. Benchmark Mineral Intelligence’s Head of Price Assessment, Andrew Miller, was recently quoted as saying, “As with many battery raw materials, graphite finds itself in a transition period where new capacity has been installed, but the real major changes in demand have not yet been felt.” In other words, patience is required.

In the meantime there is still solid demand growth from the battery sector, as well as from other value-added markets such as expandable graphite. It’s also important to bear in mind that the market structure is not the same across all flake graphite grades. There are still parts of the market that will remain tight, such as large-flake material for use in expandable graphite processing.

Benchmark Mineral Intelligence expects the anode market to grow from around 160,000 tonnes in 2018 to 200,000 tonnes in 2019. Further ahead, Roskill expects demand from the battery sector to account for about 4 percent of natural graphite demand and around 25 percent of total demand by 2028.

Another positive factor in the medium-term will be the speed of the introduction of new high-quality processing capacity to serve the battery market. This will be the big growth driver of the market over the coming decade. The ability to ramp up new, high-quality, and consistent supply will have a major bearing on the future direction of the anode market and the price of feedstock graphite material.

While Benchmark Mineral Intelligence expects the graphite market to be oversupplied in 2019 and into 2020, it then expects to see much larger volume commitments from anode consumers, in turn helping to balance the market. Furthermore, as battery expansions emerge elsewhere in the world, it is going to become increasingly important to create capacity at a raw material and advanced material level outside of China. This situation could be enhanced by closures based on environmental concerns in China and India. 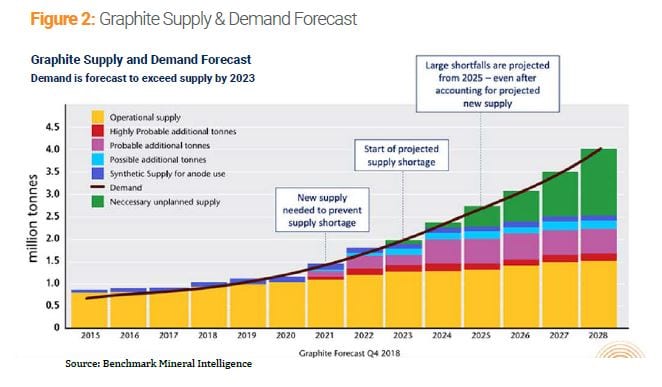 There’s no doubt that investors with a short-term investment horizon have steered clear of graphite for the time being. The fortunes of Syrah Resources have, to a significant degree, impacted both investor interest and market sentiment.

Looking ahead, there is potential for the market to face a modest supply deficit in 2021 of both synthetic and natural flake graphite, which could grow over the ensuing years. With ongoing constraints to supply combined with rapidly rising demand, price action in the graphite industry will depend on the ability of new supply (increasingly from outside of China), to meet the market’s needs.

The nature of the graphite market is that it is very fluid, meaning it will also be important to keep an eye on downstream developments – both in anode and battery technology – as these will influence where new graphite capacity is required and what type of graphite materials will be targeted.

For investors and companies alike, the key in the graphite business remains patience.