“Clearly the industry did very well in the 1990s and even through 2008. But since then there’s been a dearth of new big deposits (discovered), and … there is going to be a shortfall in new gold discoveries,” the head of mining studies at S&P Global Intelligence, Mark Ferguson, said. This lack of new discoveries is translating into lower reserves as companies produce ounces much faster than they can replace them.

The proof of this imbalance can be found in S&P Global Intelligence’s August 2018 report titled “Top Gold Producers in Decline,” which shows that over the past decade, 20 of the world’s leading gold producers have seen their remaining years of mine life fall from an average of 20 years to 15 years. In response, major gold companies have begun to focus on mergers and acquisitions as well as strategic partnerships with junior gold companies that have low-cost projects in mining-friendly jurisdictions.

Major mining companies understand that the key to long-term growth is sustainable production, which requires a healthy balance between reserves and mine output. With many of the world’s major gold producers facing diminishing reserves and a lack of new discoveries, achieving that balance has become precarious at best.

The year-over-year decline in gold production from the world’s majors alongside a lack of new quality discoveries and lower ore grades has led some in the industry to warn that the industry has reached “peak gold,” implying that all the worthwhile major gold deposits have been uncovered. This is a sentiment balked at by other analysts, including Mercenary Geologist Mickey Fulp. “It’s basically gone straight up since 2003, 2004. Even during the global economic crisis, it didn’t really take that much of a downturn,” Fulp told INN. “And it’s really gone exponential, and where’s that gold come from? It’s come from the juniors and the mid-tiers.”

Regardless, today’s major gold miners such as Barrick Gold (TSX:ABX,NYSE:GOLD), Newcrest Mining (ASX:NCM,OTC Pink:NCMGF) and Newmont Goldcorp (TSX:NGT,NYSE:NEM) are experiencing declining gold reserves at many of their top-producing operations and are on the hunt for economical gold deposits to replenish project pipelines. Based on the current project pipelines, S&P Global expects gold production levels will remain steady through 2022. However, by 2023 gold production is projected to fall by more than 3 million ounces followed by a 5 million ounce drop in 2024. Despite an increase in exploration budgets over the past few years, major gold producers appear to be making production-level discoveries less frequently.

With time-to-discovery increasing the cost and risk of exploring for new gold deposits (not to mention the time and cost associated with delineating resources), acquiring advanced gold projects from junior resource companies might be a quicker route to replenishing reserves. “Given the lengthy amount of time required to explore, discover, delineate, permit, finance, and build a new mine, a merger and acquisition is a much faster way to replace reserves,” Laurentian Bank Securities Analyst Ryan Hanley said. He added that today’s major gold producers are focused primarily on “economic ounces” rather than “growing production at any cost.”

One avenue major gold producers have in replenishing their project pipeline with economic ounces is acquiring, investing in, or partnering with junior gold companies who are better suited to taking on the high risks and costs of exploration. Projects hosting large deposits with excellent grades and easy metallurgy are ideal, especially those situated in mining-friendly jurisdictions near existing mining operations.

As the fifth-largest gold producer in the world, Canada’s abundant mineral wealth and mining-friendly policies make it an ideal jurisdiction for new discoveries. A number of junior companies in the North American nation are advancing new gold projects in regions experiencing modern-day staking rushes. These areas are leading to new discoveries that are attracting the attention of major mining companies.

In Yukon’s Dawson Range, Goldcorp’s C$520 million acquisition of Kaminak Gold in 2016 was inspired by the junior company’s discovery of the Coffee gold deposit. The prospector who made that discovery, Shawn Ryan, is now the chief technical advisor for White Gold (TSXV:WGO,FRA:29W), which controls the Golden Saddle and Arc gold deposits in the White Gold district within the Dawson Range. These discoveries have attracted the attention of Agnico Eagle Mines (TSX:AEM,NYSE:AEM) and Kinross Gold (TSX:K,NYSE:KGC), which each own a 19 percent interest in White Gold.

Newmont Goldcorp has increased its investment in the Dawson Range region’s potential, including a 15 percent interest in Triumph Gold (TSXV:TIG,OTCQB:TIGCF). Triumph’s flagship asset is the district-scale Freegold Mountain project, which hosts three NI 43-101 deposits along the Big Creek fault zone. In addition, numerous other gold and copper showings representing porphyry-epithermal systems have been found across the 200 square kilometer property. Recent exploration work on the project has identified two new high-grade gold-copper porphyry bodies, the Blue Sky Porphyry and the WAu Breccia. In 2018, Triumph hit 316 meters of 1.8 grams per metric ton (g/t) gold equivalent at the Blue Sky porphyry. During the company’s 2019 drill program, the first attempt at testing the WAu Breccia hit 601.8 meters of 1.1 g/t gold equivalent.

Like Yukon’s Dawson Range, British Columbia’s Golden Triangle is also in the midst of a modern-day staking rush and bringing in investment from major gold companies. In 2019, Newcrest Mining, one of the world’s largest gold miners, signed a joint venture deal with Imperial Metals (TSX:III) and paid US$806.5 million in cash for a 70 percent stake in the Red Chris mine. In the past few years, GT Gold (TSXV:GTT) has made two significant discoveries in the Golden Triangle on its Tatogga project, including an epithermal gold-silver vein system at Saddle South and a porphyry gold-copper-silver deposit at Saddle North. Newmont Goldcorp recently made a C$17.6 million investment in the company for a 9.9 percent interest in GT Gold.

In the Red Lake district of Ontario, Canada’s biggest gold producing province, Great Bear Resources (TSXV:GBR,OTCQX:GTBDF) recently made multiple gold discoveries at the Dixie project. This prolific region is home to 28 historic and currently operating mines, including Newmont Goldcorp’s Red Lake gold mine. Great Bear’s drilling success at Dixie in 2018 and 2019 has sparked the largest staking rush in decades within the Red Lake district. The discoveries also led to strategic investments by Rob McEwen and his company McEwen Mining (TSX:MUX,NYSE:MUX) for a total 18.83 percent position in Great Bear.

Quebec, Canada’s second-biggest gold producing province, is home to the Abitibi greenstone belt, which has become another hotbed for exploration activity in recent years. It’s here that Bonterra Resources (TSXV:BTR, OTCQX:BONXF, FSE:9BR2) has made three high-grade gold discoveries, including Gladiator, Moroy and Barry. Sprott Global Resources, Kirkland Lake Gold (TSX:KL,NYSE:KL,ASX:KLA) and Kinross have all made strategic investments in Bonterra.

New projects are crucial to supply the reserves needed to maintain sustainable production levels. The world’s major gold producers are looking to junior exploration companies to take on the challenges of finding new discoveries, creating an opportunity for smaller gold companies.

This article was originally published by the Investing News Network in February 2020: here 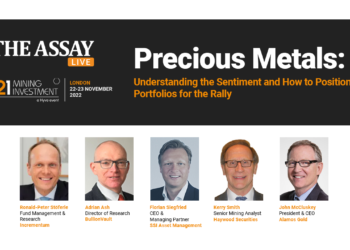