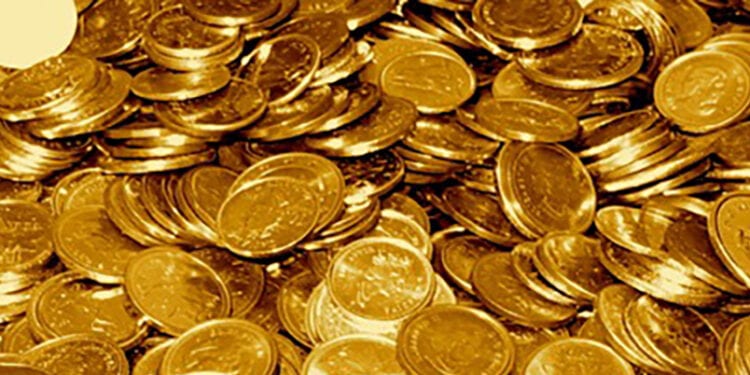 “If you don’t trust gold, do you trust the logic of taking a beautiful pine tree, worth about $4,000-$5,000, cutting it up, turning it into pulp and then paper, putting some ink on it and then calling it one billion dollars?” — Kenneth J. Gerbino

In this note we’re reviewing interesting recent developments with respect to gold. According to the World Gold Council’s mid-year outlook, gold will likely shine over the next 6 to 12 months as heightened risk meets easy money. Globally, central banks have clearly pivoted back toward easy money. The World Gold Council projects that this turn, along with continued financial market uncertainty, will likely support gold investment demand and nudge prices generally upward. 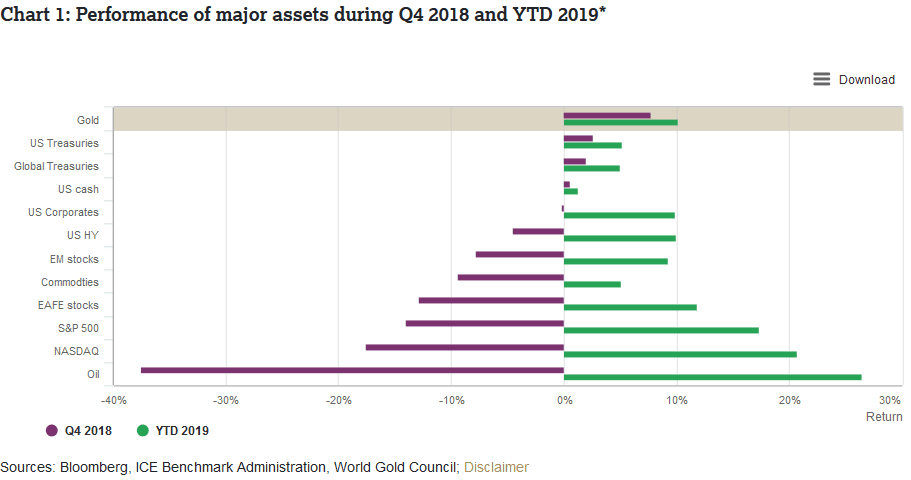 Gold will likely shine over the next 6 to 12 months as heightened risk meets easy money. Gold ranked as one of the best-performing assets through the first half of 2019, beaten only by stock markets – which have also been supported by the turn toward looser monetary policy – and oil. And if you combine gold’s gains through H1 2019 and Q4 2018, nothing beats it. While US stocks made significant gains in dollar terms over the first six months of the year, they actually lost values when priced in gold.

Globally, central banks have clearly pivoted back toward easy money. The World Gold Council projects this turn, along with continued financial market uncertainty, will likely support gold investment demand and nudge prices generally upward. The WGC report offers a succinct summary of the 180-degree turn in monetary policy, noting that it happened rather rapidly. It also points out that the Fed doesn’t often act against market expectations.

“Global monetary policy has shifted by 180 degrees. Less than a year ago, both Federal Reserve (Fed) board members and US investors expected interest rates to continue to increase, at the very least through 2019. By December, the most likely outcome was for the Fed to remain on hold. Now, the market expects the Fed to cut rates two or three times before the end of the year. And while statements by board members, including Chairman Powell, are signalling a wait-and-see approach, the market has barely changed its forecast. The Fed may not do what the market asks, but it generally doesn’t like to surprise it either. In recent history, the Fed adjusted its funds rate in line with expectations whenever the market’s implied probability of such outcome was 65% or higher; the only notable exception was rate cut announced during an un-scheduled Federal Open Market Committee (FOMC) meeting in January 2008 when the global financial crisis began to unfold.” 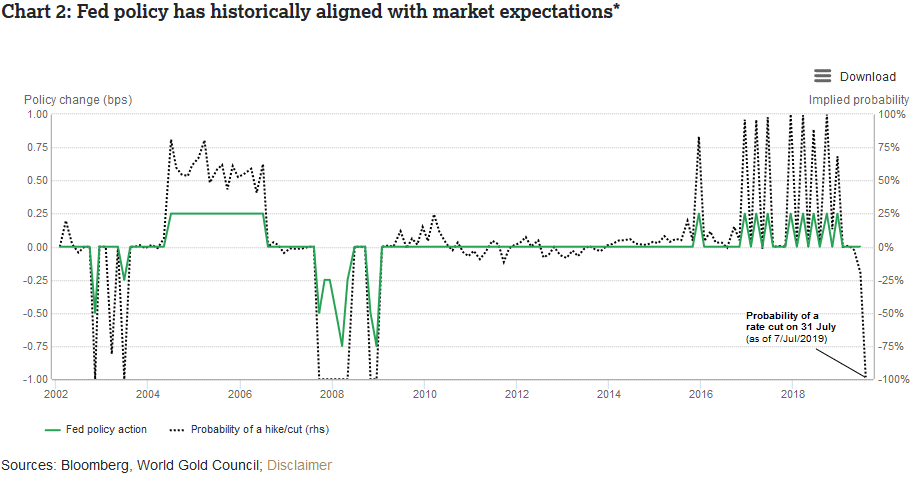 The WGC report notes a number of significant risks in the market right now, including the potential long-term effects of increased tariffs, tensions between the U.S. and Iran, uncertainty surrounding Brexit, and overvalued stock markets. Low interest rates are having the perverse effect of fuelling a decade-long stock market rally with only temporary pullbacks. This has pushed stock valuations to levels not seen since the dot-com bubble. Worryingly, in the event of a recession, central banks – including the Fed – may not be able to rely on cutting interest rates. Instead, they may need to use quantitative easing and, possibly, new non-traditional measures to reinvigorate the global economy. 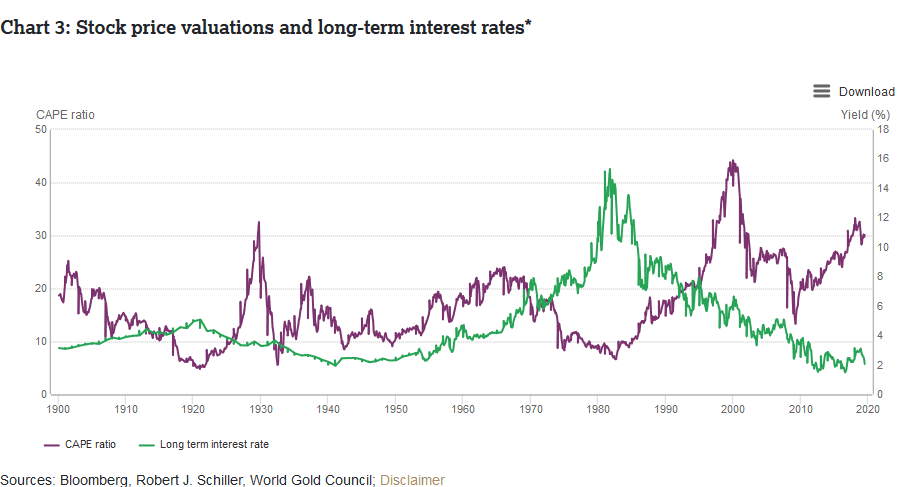 The WGC report also noted that a large portion of the world’s sovereign debt now carries negative real interest rates. As we highlighted in our previous commentary on gold, the current U.S. economic expansion that began during June 2009, is set to become the longest in history. But it’s all the result of Quantitative Easing (or QE or ‘easy money’) on a massive scale, which has had the nasty consequence of seeing US debt escalate at unprecedented levels.

QE worked well in lifting asset prices, but was not so beneficial for the overall health of the US economy. QE was ultimately a massive “wealth transfer” from the lower and middle classes to the rich, which has generated one of the most significant wealth gaps in US history, together with an asset bubble of historic proportions. In terms of overall borrowings, the US national debt for the first time passed $22 earlier this year and its manageability could have a big longer-term impact on the US economy. 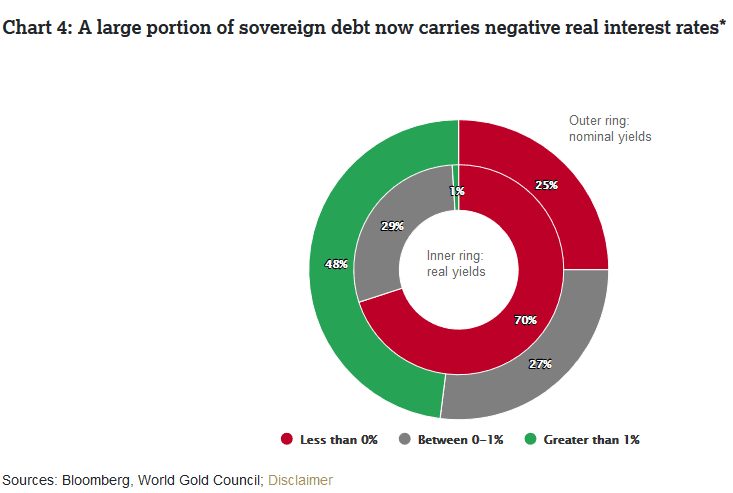 At the same time there are more immediate question marks over the longevity of the US stock market bull run, with various indicators suggesting that the expansion could turn into a contraction in the very near future – hence the desperate move by the Fed towards a likely rate cut.

While we’ve seen the Fed Funds rate increase from 0% to 2.25–2.50% over the last few years, these short-term interest rate levels are still extremely low by historical standards. But these modest interest rate increases have still managed to negatively impact the rate of US economic growth. How would the US economy cope if rates returned to anywhere near normal levels? Ultra-low borrowing rates is the only factor that has kept the U.S. deficit from surging past $1 trillion annually.

Which brings us back to gold, with the metal being the direct beneficiary of this stock market uncertainty. There is a strong inverse correlation between gold and the S&P – their respective bull cycles don’t occur at the same time. If the S&P is doing well, it’s likely that gold is stagnant or struggling to hold form. This is clearly reflected in the graphic below. Since August 2018, gold hasn’t looked back.

With the Fed seemingly giving the signal that the next move in rates might be lower, there is likely anticipatory buying in gold occurring as declining real interest rates, declining economic growth and a declining stock market all make gold the go-to safe haven investment. 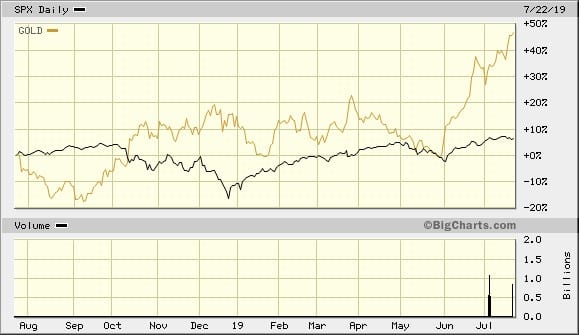 The confluence of events is undeniable: M2 surging, economic growth slowing, inversion of the yield curve, real interest rates likely declining further as the prospects for a rate cut increase, high valuations in stocks, a concerning technical picture in the S&P, together with international trade and diplomatic tensions – have all resulted in gold making further strong gains.

The conclusion to draw is that while there will be natural volatility in the gold market over the short-term, the overall upward trend for the yellow metal remains intact, as investment and central bank demand remains robust. Accordingly, I’ve adjusted upwards my previous forecast trading range for gold for the balance of 2019 from $1250 to $1350, to $1350 to $1450.