The Assay - Four Key Reasons for Higher Commodity Prices in 2018

I believe that there are compelling bullish factors that will cause the prices of commodities to rise in 2018. Following on from a tremendously strong performance during 2017, there are four key reasons why I believe commodities will maintain their momentum during 2018. Firstly, I expect further US dollar weakness; secondly the global economic outlook is positive; thirdly, there’s an old saying ‘the trend is your friend’; and finally, I believe we’ll begin to see the real emergence of inflationary pressures.

Commodities price moved higher by just under 8% during 2017 – comprising the performances of all of the various sectors – including precious metals, base metals, energy, grains, soft commodities and animal proteins. However, it was a tale of two markets in the raw materials sector – as agricultural prices lagged and dragged down the composite returns – while many industrial commodities prices soared.

Population and wealth around the world continues to grow, putting a strain on the demand side of the fundamental equation for finite commodities. To put things into some sort of perspective, back in 1960 there were fewer than three billion people on the earth. At the end of 2017, the number of inhabitants stood at more than 7.4 billion.

When looking at the performance of the commodities sector as an asset class during 2017, many industrial commodities that are the building blocks of infrastructure around the world outperformed the major equity indices. For example, the price of palladium – both an industrial and precious metal – appreciated more than 56% over the course of the year. In addition, aluminium and copper both posted better than 30% gains, whilst zinc, nickel and lead were all up more than 20% on the year. Finally, crude oil, gold, and heating oil all moved more than 10% to the upside.

As 2018 is upon us, I believe there are strong prospects for a continuation of a broad-based commodities rally. I believe that there are four reasons to be bullish on the raw materials sector this year. Any one – or a combination of all – could lift prices during the course of the next twelve months.

Reason One: The US Dollar

The inverse historical relationship between the US dollar and raw materials prices was supportive for commodities during 2017. The U.S. dollar index moved more than 10% lower last year and closed the year at close to recent lows and a critical support level. The graphic below compares the performance of the US dollar with the performance of gold over the past 12 months.

Interestingly, interest rate differentials between the US and the rest of the world should favour the dollar, as they are typically one of the most significant factors when it comes to the path of least resistance for currency values. The widening gulf between yields of the dollar and other currencies should be bullish for the dollar; however when a market cannot move to the upside on bullish news, it often tends to be a very ominous and potentially bearish sign.

As we’ve stated consistently in our various commentaries on gold, the Trump administration has made no secret of its desire for a lower dollar. As the reserve currency of the world, the greenback is a useful tool and weapon when it comes to fighting perceived trade inequities and imbalances. A lower dollar will increase the competitive nature of US companies and potentially spur US exports. Therefore, I expect the dollar could weaken further during 2018. A key threshold is around the 90 level on the dollar index – if it falls below this level, it could trigger a wave of buying across all commodities markets.

Few could argue that global economic conditions have not improved dramatically over the past year. One of the best indicators of the optimism that has gripped markets is the performance of equity markets around the world. In the US, GDP has been rising at more than 3% and unemployment is at its lowest rate in decades.

In Europe, it will not be long before economic data and growth cause the ECB to pivot from accommodative monetary policy to tightening of credit. In China, the demand side of the equation for commodities, the “new normal” and President Xi’s plans to both raise the standard of living for the Chinese and help clean up the environment, could mean more demand for staples and less output when it comes to smelting and refining of ores into metals.

The global economy is currently highly supportive of raw material prices. Moreover, rising population and wealth will continue to increase demand for finite commodities and competition is likely to cause prices to continue the pattern of higher lows during corrective periods. 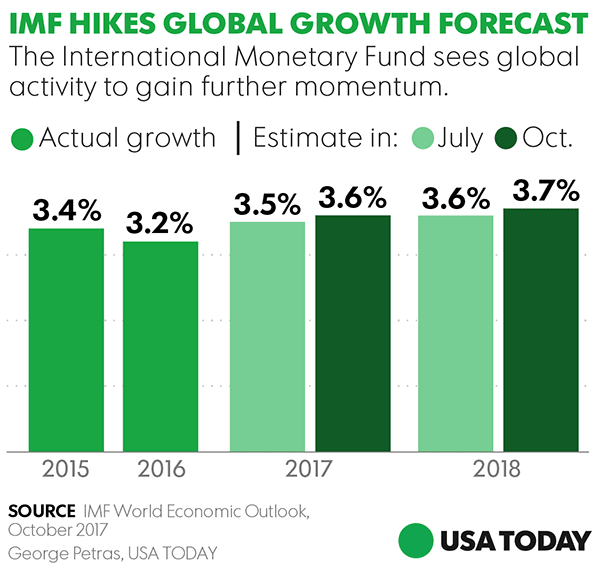 An old friend and colleague of mine from my stockbroking days loves the saying, ‘The trend is your friend’. When it comes to trading and investing in commodities markets, trends are significant in that they are a reflection of the underlying supply and demand equation, with speculators that follow these trends often exacerbating price moves on both the up and downside.

If we look at a graphic of key metals over the course of the past year, a bullish picture becomes apparent. Furthermore, the emergence of the electric vehicle (EV) revolution is driving further fundamental and speculative investment in commodities. This is reflected in the graphic below.

Raw material prices are highly sensitive to inflationary pressures in the global economy. A decade of accommodative monetary policy – where central banks flooded the system with liquidity via historically low interest rates and employed policies of quantitative easing to keep rates low further out on the yield curve – comes at a price. More currency in the system at low rates of interest ends up weakening the value of money.

This is evident in signs of financial inflation in world equity markets, as well as the new and burgeoning asset class of digital currencies. Over the past two months, the total market cap of the 1,384 crypto-currencies has risen from around $300 billion to almost $780 billion, prior to their recent correction.

While the Fed and ECB continue to state that inflation remains below their 2% target rate, inflationary pressures are bound to show up as a result of years of accommodation. The recent tax reform in the United States is likely to increase wages, which is a critical component when it comes to measuring inflation. An increase in the rate of inflation would be a highly supportive factor for the commodities asset class.

Another Positive Year Ahead for Gold, Says the World Gold Council

Another Positive Year Ahead for Gold, Says the World Gold Council