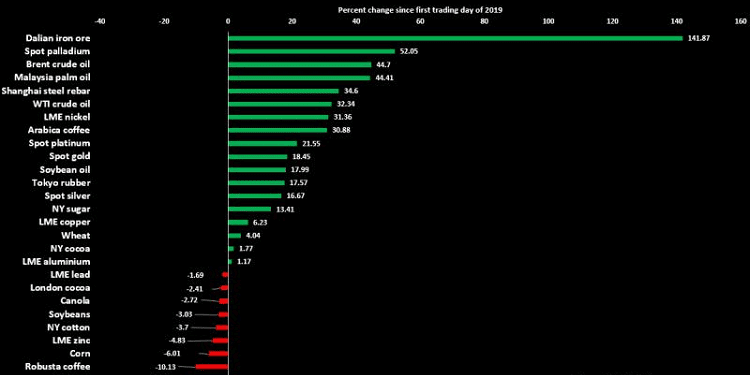 “Without the element of uncertainty, the bringing off of even, the greatest business triumph would be dull, routine, and eminently unsatisfying.” – Paul Getty

Whilst US equity prices are currently at all-time highs, commodity prices by comparison are as cheap today as they have been for decades. Commodities have not enjoyed the same boost from ‘easy money’ and asset-boosting policies like quantitative easing, that stock prices have seen. 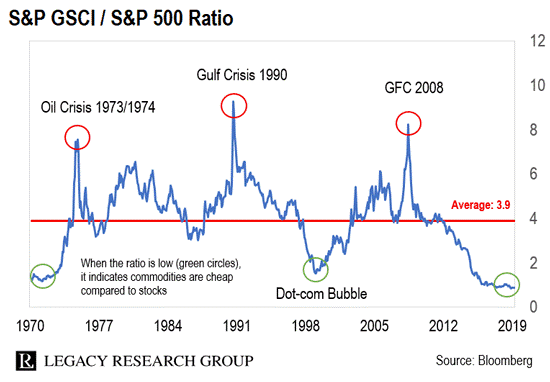 Despite the near-term negative impacts of the coronavirus, there are strong prospects for commodity gains later this year and longer-term.

While the supply side drives short-term price movements, the demand side of the equation will continue to exert upward price pressure on commodities. Demographics tell us that while the supply side can be highly variable, demand is an ever-increasing factor. This is underlined by the fact that the global population has more than doubled over the past six decades.

Moreover, since the turn of this century, it has climbed more than 27%, rising from six to 7.623 billion. The bottom line is that more people, with more money around the world, require more raw materials each day to sustain their lives.

Technological advances in production have made it possible for commodity production to keep pace with ever-increasing demand. Each year, 80 million more people are consumers – which means that within a decade, the addressable market for raw materials grows by more than three-quarters of a billion people. The demand side of the fundamental equation is always expanding, while supplies are variable.

Most commodities prices were significantly higher at the end of 2019 than they were at the turn of this century. The impact of demographics suggests that prices will be much higher over the coming decades because of the effect of demand on the fundamental equation for the asset class.

Commodities are global assets, which means that there’s a myriad of domestic and global factors that can influence prices. The potential for ‘risk-off’ behaviour in markets because of trade wars and protectionism, wars, health contagions or natural disasters, can cause significant price corrections.

For most commodities however, the supply-side has the most significant impact on prices on a short-term basis. As we witnessed in the oil market during the first two weeks of 2020, events in the Middle East that have the potential to threaten supplies can have immediate and dramatic effects on the price.

The graphic below shows the relative performance of a broad cross-section of commodities during 2019. One can reasonably expect volatility in oil over the coming year, and the Middle East is likely to be a constant catalyst for price action. Since crude oil powers the world, the price action in the petroleum market will impact the prices of markets across all asset classes, including other commodities. Energy is a critical element when it comes to the production of all raw materials. 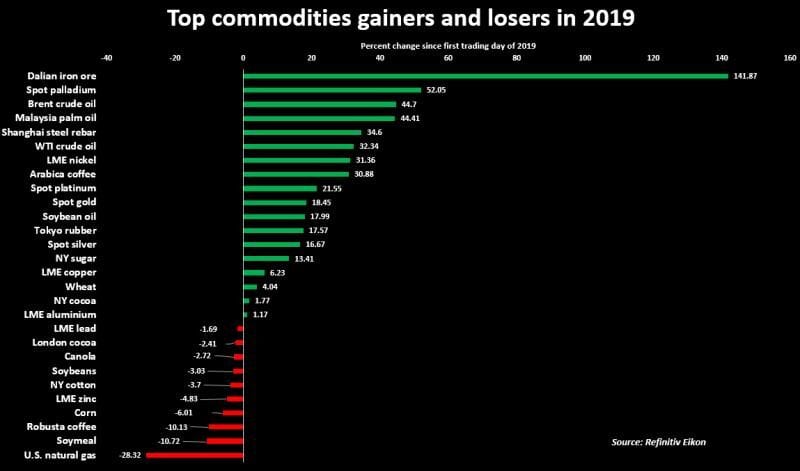 Supply issues in non-ferrous metals will also help to drive prices over the coming months and throughout the year. The Indonesian export ban, when it comes to nickel, could cause shortages of the metal that’s a requirement for steel and batteries. Political issues in Chile could cause declines in copper output. Indonesia and Chile are the world’s leading producers of nickel and copper. Any significant events on the supply side for either metal could impact prices of aluminum, lead, zinc, and tin, the other nonferrous metals that trade on the LME.

Let’s now take a look at gold, which is a hybrid commodity as it’s both a financial asset and a commodity. One of the barometers for the effect of interest rates on the commodities asset class was the price action in the gold market in 2019.

Central banks continue to buy the yellow metal to add to reserves, and investor interest in gold increased. Falling interest rates have been bullish for the price of gold. Last year, the price of gold rose in US dollar and Swiss franc terms, but it did not reach new record levels. However, in almost all other currencies, gold rose to new all-time highs during 2019 and 2020.

If the price action in gold in euros, Japanese yen, British pounds, Canadian and Australian dollar, yuan, rubles, and most other currencies is a signal – gold in dollars and the Swiss franc could be heading for new record levels. The ascent of gold in all currency terms is a commentary on the declining value of fiat currencies that derive their value from the full faith and credit of the nations that print banknotes and mint coins. In an environment where currency values are declining, the path of least resistance of all commodities prices is likely to be higher.

The graphic below highlights the declining purchasing value of currencies over the past 50 years. 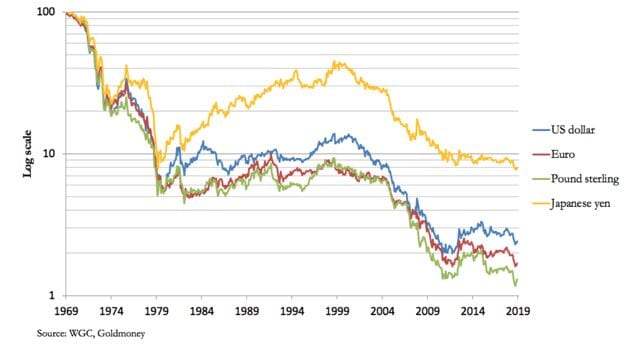 The US Federal Reserve is likely to be supportive of gold during 2020, after lowering the short-term Fed Funds rate three times for a total of seventy-five basis points in 2019 – which ironically negated three-quarters of its 2018 move to tighten credit in the US. At the same time, the program of balance sheet normalization ended in August, which took upward pressure off interest rates further out along the yield curve. Meanwhile, volatility in the yield curve caused the central bank to increase short-term liquidity, which amounts to quantitative easing in the near term.

The bottom line is that the US central bank pivoted from a hawkish to dovish approach to monetary policy in 2019. In 2020, the Fed is likely to stay on the sidelines during the election year, which is positive for gold.

I am positive on the outlook for commodities in 2020. I believe that markets, investors, and traders are not paying enough attention to the decline in the value of all fiat currencies. Gold’s rise is a sign that paper currencies continue to lose value. While governments might attempt to take steps to curb any currency volatility, more than a decade of accommodative monetary policies by the world’s central banks would make it difficult to change course.

Populations are growing, new-age commodities are increasing in demand, while all commodities are faced by the same challenges – greater geopolitical risks, funding challenges and greater environmental hurdles. This means that over time, steadily higher prices will be required in order to incentivize production and ensure there are the next generation of mines.

Are the Commodities in Place for the Bullish Mood to Continue?