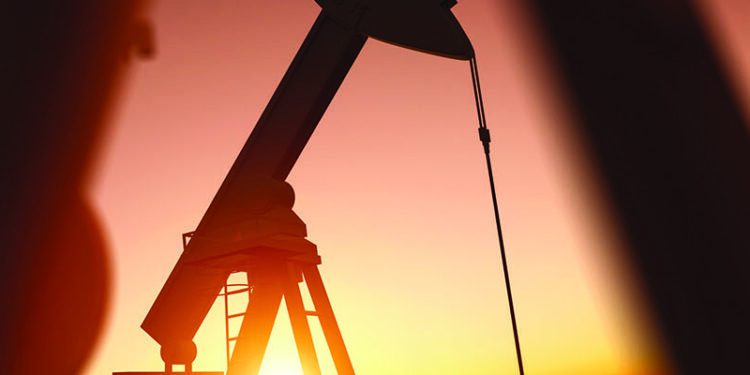 For some time we have noted the similarities between the 1970s and the current era. Recent events in Saudi Arabia represent another analogue to the 1970s, a period which saw a sustained gold price rally culminating in a new all-time high. As well as tensions in the Middle East, the 1970s featured flawed monetary policy, acute disillusionment with the political institutions, social unrest, and shrinkflation, all against the backdrop of the dollar’s reserve currency status being questioned.

I don’t believe the spike that we have seen in the oil price, in and of itself, is sufficient to shift real interest rate expectations (the main driver of the gold price). The oil price appreciation is not enough to undermine consumers and corporates. Neither do I expect it to result in surging inflation. However, recent events risk engendering major conflict in the Middle East, potentially involving US military assets. 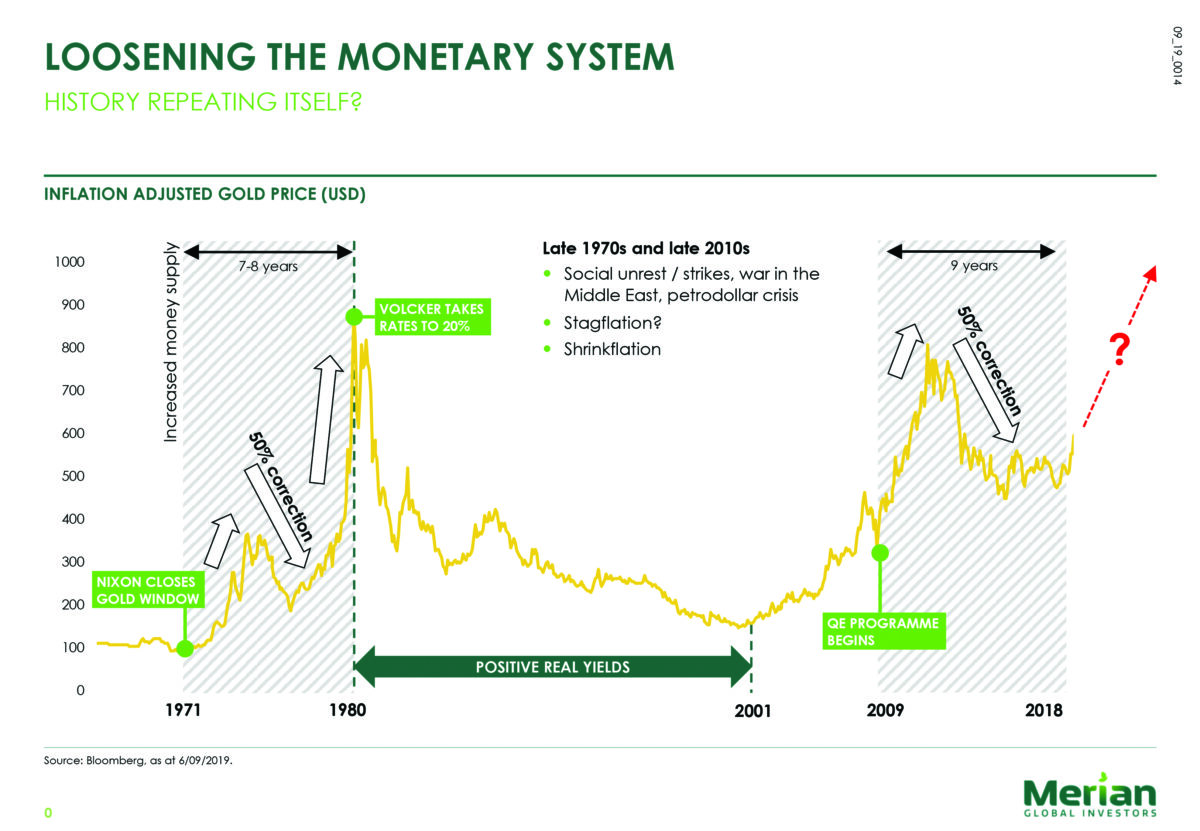 One should not underestimate the significance of the US-Saudi Arabia relationship, which has been key to the US dollar’s preeminence, nor the extremes to which the US will go to show support for its ally.

Since the 1970s it has been convention that Saudi Arabia sells the vast amounts of oil that it produces for US dollars, and subsequently uses a substantial amount of those US dollar proceeds to buy US treasuries. In selling its oil for US dollars, Saudi Arabia created a need for the US dollar amongst the purchasers of its oil and, by buying US treasuries, it funded the US government. Crucially, this oil-related demand for US dollars facilitated the 1971 transition from US dollar convertibility into gold (under Bretton Woods) to the current fiat regime.

In turn, Saudi Arabia’s US dollar-centricity appears to have been reciprocated by the US, essentially assuring the Kingdom’s security; an arrangement that is said to have been brokered by Henry Kissinger. In recent years, China has become the largest importer of Saudi Arabian oil and is increasingly looking to do its oil trade in its own currency, the yuan. It has even sought to promote the so-called “Petroyuan” by developing a yuan-denominated oil futures contract. We expect that given Saudi Arabia’s growing ties with China, and the threat to US hegemony that this represents, the US will be especially keen to show their alignment with and support for Saudi Arabia in any Middle Eastern disagreements.

Yet it’s evident that change is afoot and the US dollar’s role as a political tool is as clear as ever. The day is drawing closer when gold will once again play an important role as apolitical money.

It seems that most investors are woefully unprepared for a 1970s-like environment as typical investor portfolios have less than a 0.1% allocation to gold. This is in stark contrast to the reserves of central banks which generally include a sizeable holding of gold (G7 central banks on average hold 40% of their reserves in gold). Central banks continue to buy gold aggressively and accumulated a record number of tonnes in the first half of the year. However, I believe we are currently moving from the “show me” phase for gold, characterised by reluctance among investors to buy the yellow metal, to the participation phase, denoted by the enthusiastic buying of gold by investors. We expect the gold price to be bolstered by a dovish US Federal Reserve which, in the absence of sustained above-target inflation and a definitive US-China trade resolution, is likely to remain highly accommodative. 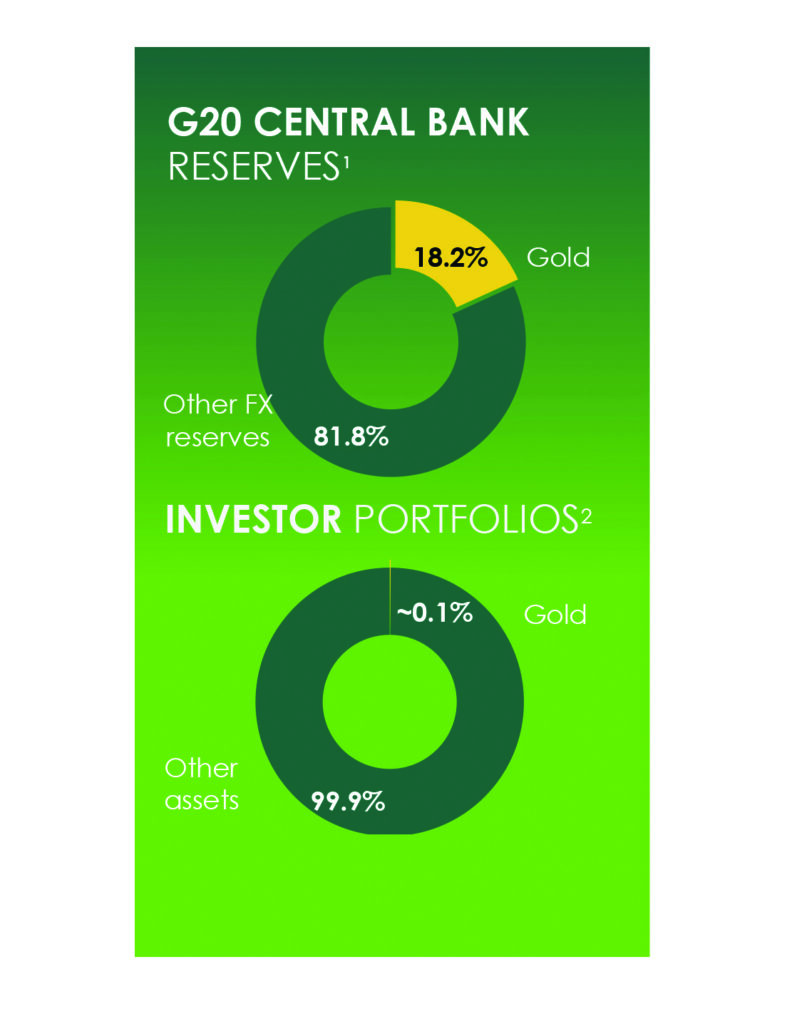 As an investor in both gold and silver, I am very encouraged by the behaviour of the silver price as reflected in the gold/silver ratio. The gold/silver ratio measures the value of an ounce of silver relative to an ounce of gold and at its current level of 83 it is at the higher end of its historical range. In other words, silver is historically cheap relative to gold. Silver, which is considered both a currency and a commodity, is consumed in a number of industries, such as in electronics, solar, and medical instruments. The benefit of this is that its return profile is roughly double that of gold, meaning that it increases in value much faster than gold when precious metal prices are rising, although it declines faster when prices are falling.

The gold/silver ratio tends to fall during bull markets for gold and silver (i.e. silver outperforms gold when both metals are in a bull market) and it appears to be trending lower. Silver receives even less investor attention than gold but, as theNobel Laureate Milton Friedman famously said, “The major monetary metal in history is silver, not gold”. It follows that, as well as holding both gold bullion and gold mining stocks, the fund that I manage holds both silver bullion and silver mining stocks.

With central banks seemingly removing rate hikes from this year’s playbook and flipping to actively loosening monetary policy, the current macroeconomic environment is highly supportive of gold and silver which, as inflation-busting assets, perform well during times of traditional currency weakness. The snag is that, following years of central banks supposedly pursuing a “tightening strategy”, it may take a short while for investors to believe this is a genuine U-turn.

It appears, though, that the market is finally starting to accept the new narrative. 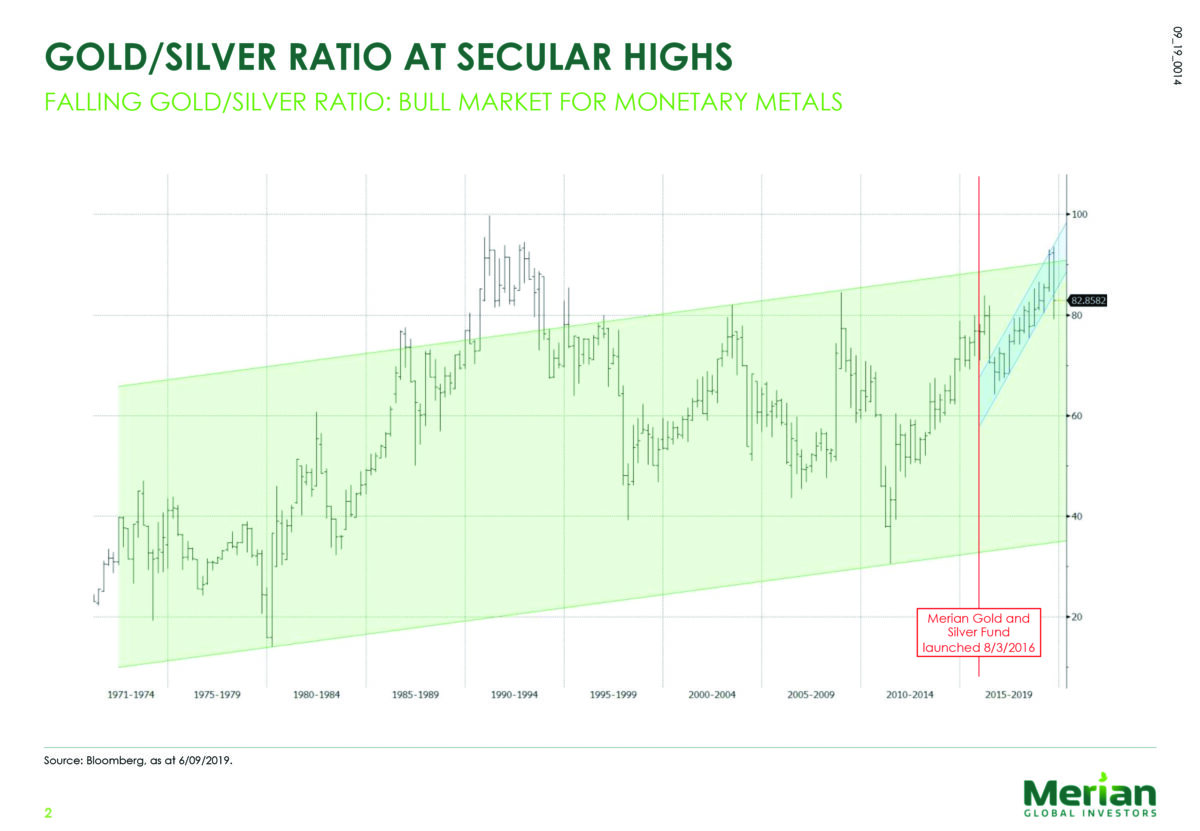 Past performance is not a guide to future performance and may not be repeated. Investment involves risk. The performance data does not take account of the commissions and costs incurred on the issue and redemption of shares. The value of investments and the income from them may go down as well as up and investors may not get back the amount originally invested. Because of this, an investor is not certain to make a profit on an investment and may lose money. Exchange rate changes may cause the value of overseas investments to rise or fall.