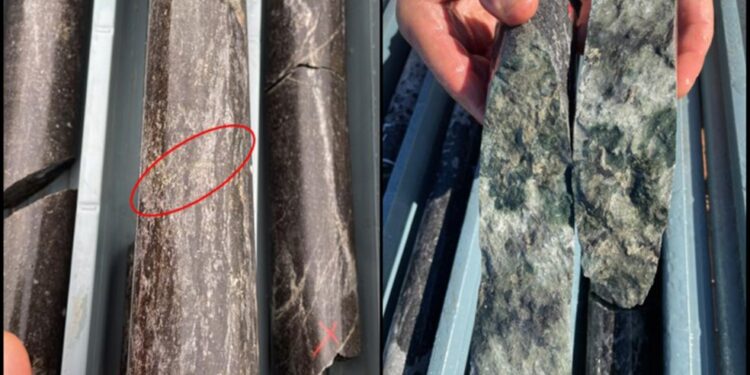 “Exciting exploration programmes have ramped up over the past month at our projects – particularly at Paterson and Mt Alexander where important field activities are underway,” Executive Chairman, John Prineas, said.

“Diamond drilling at Paterson is testing the basement rocks for the very first time with early indications confirming the prospective rock-types for copper-gold deposits in the region.

“Geological observations of the drill core report intense alteration and that the rocks have been subject to pervasive hydrothermal fluids. Visual logging of copper sulphides adds further support for the potential of significant mineralisation on our ground.

“At Mt Alexander, an extension seismic survey has been completed and a new EM survey – employing the latest ARMIT technology – is underway. These geophysical surveys have been designed to investigate large target areas for nickel-copper sulphides which are underexplored or unexplored, with drilling of these areas scheduled to commence next month.

“The ongoing modelling of the new magnetic data for Ajana is revealing exactly what we were hoping to see – a late-stage layered mafic intrusion.

“The location of this intrusion in an established mineral field with many base metal deposits, is very favourable for the potential for the intrusion to be associated with further mineralisation. We are pleased to have pegged additional ground contiguous to our existing exploration licences, giving us the substantial landholding in this unexplored area of the Northampton mineral field.

“The Company looks forward to reporting back to our shareholders on these active work programmes with exciting news flow.”

Diamond drilling at the 100%-owned Paterson Project commenced in May to test basement rocks for the potential of large copper/gold systems. Two drill holes have been completed to date – PDD001 and PDD002 – to depths of 265m and 289.2m, respectively.

Basement lithologies intercepted so far are a series of high-grade meta-sediment host rocks that are considered part of the Yeneena Basin package which hosts several known deposits within the Paterson Province.

Intense localised alteration surrounding multiple sets of cross-cutting veins have been observed in the drill core, indicating structural complexity and the fact the rocks have been exposed to hydrothermal fluids.

Disseminated sulphide mineralised zones of up to 10% sulphide content have been logged in PDD002 within several zones throughout the hole including at 267m depth where pyrite (iron sulphide) and chalcopyrite (copper sulphide) have been observed.

These observations are confirmed by handheld XRF but should be considered qualitative only pending laboratory assays.

Drilling is continuing to focus on the two priority target areas 1 and 2 where anticline structural folds and internal granitic domes have been interpreted – these are textbook trap sites for mineralisation.

Mr Prineas said with only two holes completed and wide spacing between holes, St George is strongly encouraged about the remainder of the drill programme which includes targets in highly prospective locations.

The drill hole in progress – PDD003 – is located further towards the fold nose.

Laboratory assays from Bureau Veritas in Perth are expected within 6-8 weeks and required to confirm the metal content (if any) in the drill core. Processing, including detailed logging, of the core for PDD001 and PDD002 is in progress.

Geophysical surveys have been designed to assist in generating drill targets for the next drill programme at Mt Alexander, which is scheduled to commence in late July 2022. These surveys are focusing, in particular, on large conceptual targets.

A new seismic survey, to extend the successful 2021 survey, has been completed with 13-line kilometres. Key areas covered by the survey include the granite/greenstone contact and the Radar Prospect.

The interpreted contact and related structures between the Mt Alexander greenstone belt and the granites is considered prospective for mineralisation and is a setting that is known to host high-grade nickel in other parts of the Yilgarn Craton.

Radar is located in the eastern extension of the Cathedrals Belt which is underexplored. The survey will aim to build on the structural information and interpretations in this area. The Radar mineralised intercepts include MAD152 which returned 4.0m @ 3.0%Ni, 1.1% Cu, 2.2g/t PGE from 48m with very little follow-up exploration. Processing and modelling of the seismic data is in progress with external consultants at Rock Solid Seismic, and results are expected ahead of the start of the July drill programme.

A ground-based MLEM survey commenced at Mt Alexander last week and is expected to be completed within three weeks. The survey is using an ARMIT sensor, specially designed to operate with lower noise levels than other EM technologies. This makes the ARMIT sensor more effective in surveying areas with conductive cover and potentially able to penetrate to deeper levels below surface.

St George has welcomed ASX100 battery metals miner IGO Limited (ASX: IGO) as its 25% Joint Venture partner in E29/638, the exploration licence at the core of the Mt Alexander Project.

E29/638 covers the high-grade Cathedrals, Stricklands, Investigators and Radar nickel-copper-PGE discoveries. IGO joins the JV following its successful takeover of Western Areas. St George (75%) manages activities on E29/638, with IGO retaining a 25% non-contributing interest until there is a decision to mine.

The 100% owned Ajana Project is located within the Meso-Proterozoic age Northampton mineral field, situated adjacent to the western margin of the Yilgarn Craton – an area of surging exploration activity following the discovery of Chalice Mining’s substantial Julimar deposit in the western Yilgarn.

Inversion modelling of the magnetic data by Newexco suggests the magnetic anomaly is indicative of a late-stage layered mafic intrusion which is prospective to host significant Ni-Cu-PGEs. The presence of a large magnetically active intrusion in an established mineral field elevates the potential for the feature to be associated with mineralisation.