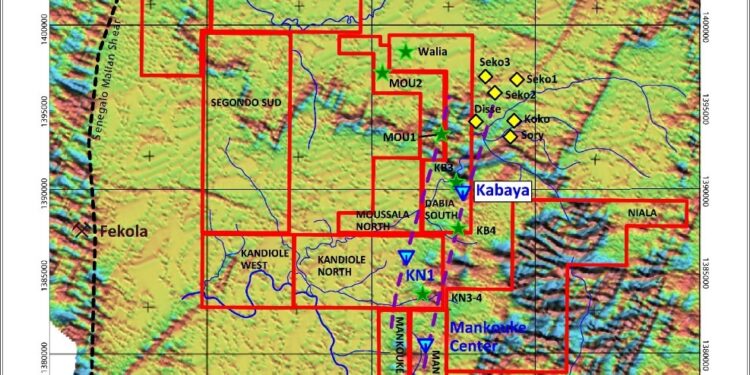 KB3 is the satellite deposit North of the main Kabaya resource (KB1 and KB2). The recent drilling results provide some significant intercepts at depth, in the fresh rock confirming the mineralization continuity, growing the gold mineralization envelope toward the East, as well as to the South.

The mineralization shape has an NNE-SSW orientation plunging to the South, outlining an unexplored southern window.

The current drilling results at KB3 delineate an estimated strike length of 350m, a width of 100m, and 150m vertical depth. This zone is open at depth and laterally. There is an underexplored zone of 850m between KB3 and KB1-2, and the main gold mineralization is yet to be fully tested.

“Drilling at Kabaya continues to expand the footprint of the gold mineralization beyond the current footprints of the maiden resource,” President and CEO, Nana Sangmuah, said.

“We are excited by the fresh rock intercepts at KB3, which points to a larger mineralized system with the 850-meter gap zone between KB1-2 and KB3 yet to be fully tested. This the second new zone discovered outside the perimeter of the known resource at Kabaya and will be further tested in the next round of drilling to commence before Christmas.

“The gold mineralization at Kabaya KB3is disseminated and associated with strong kaolinization. The gold host rock is an alternate between tuffaceous and greywacke facies crosscut by younger dolerite sills and dykes. The higher-grade zone doesn’t appear at the surface and from the longitudinal section the mineralization is plunging around 20-30° to the South. This higher grade hasn’t been captured in the resource estimation.”

The Kabaya Deposit is part of a prolific regional Siribaya-Mankouke-Seko structural corridor. The Kabaya gold orebody is on the Eastern edge of this major structure covered well by the Roscan large land package over 25km.