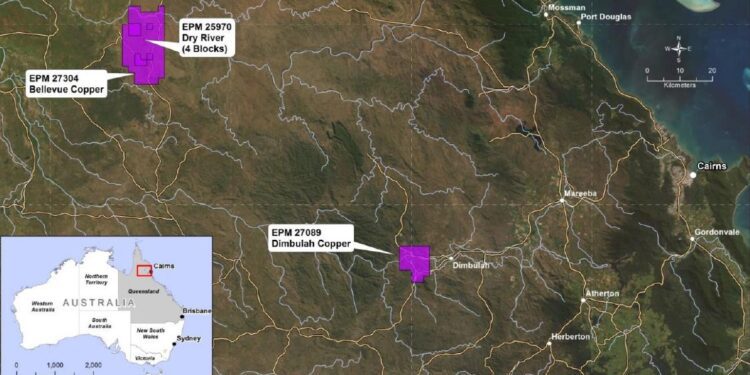 Data processing is expected to be completed over the next two to three weeks.

The objective of the gravity and magnetic survey is to assist in project ranking as mineralisation at the OK Mine and potentially elsewhere has affinities with both VMS (volcanic massive sulphide) and IOCG (iron oxide copper gold) mineralisation styles.

The Bellevue and Dry River exploration projects cover 25km of the prospective OK member stratigraphy which contains at least 11 copper/gold prospects including the historic OK mines.

The company recently applied to add excluded land within EPM 25970 which now covers the OK mine site. Historical exploration has focused on the OK mine area where mining to a depth of 90 metres returned some encouraging copper grades, with the upper portions probably reflecting supergene enrichment.

Behre Dolbear’s Independent Technical Report (2006) reports that five separate sulphide lenses can be traced over a strike length of approximately 2.5km from OK North through OK Mine to OK South with the mineralisation interpreted as VMS (volcanic massive sulphide) deposits with later potential remobilisation into fold hinges.

However, an association with extensive haematitic breccias suggest mineralisation may be epigenetic with the mineralisation having affinities with IOCG (iron oxide copper gold) deposits. R3D Resources believe that the gravity and magnetic survey is an appropriate method for identifying large sulphide orebodies and/or haematitic breccia zones in the OK mine area and elsewhere across the tenements.