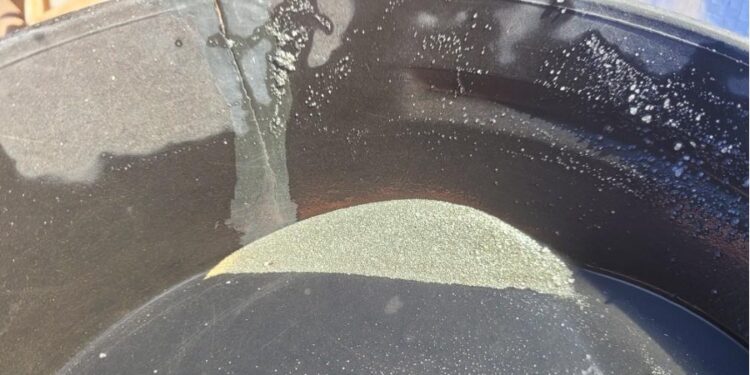 Random drill chips were selected for Petrographic analysis from PTORC 022 (154-155m) and PTORC 024 (156-157) and in both samples free visible gold was observed. Associated with the free gold is electrum (gold silver alloy) pyrite and chalcopyrite.

Drilling in very restricted areas around parts of the Patricia open pit has resulted in a planned RC drill pattern with hole spacing of 20m along the side of the pit. In some locations, a second hole was drilled 10m further from the pit, with the closest hole to pit crest at a -55° dip and the second hole at a -62° dip, allowing up to 60m separation between hole traces downhole at the planned target pierce point.

The hole collars PTORC 022 and PTORC 024 are 40m apart but due to a change in azimuth direction drill traces will intersect downhole intervals with visible gold approximately 18m apart.

The change in drill hole azimuth is required to remain perpendicular to the mineralisation. Initial observations and the early interpretation of RC drill logging is demonstrating Patricia is a structurally complex project, potentially with late stage faulting that is offsetting lithologies and potential gold mineralisation.

Planned diamond drilling will provide structural data to help to resolve this. This 28 hole RC drilling programme at Patricia is the first in over 30 years.

The aim of this initial drilling programme is to target high grade gold mineralisation immediately beneath the existing Patricia open pit.

Unfortunately, two of the 24 RC holes drilled were abandoned due to ground conditions with the drill target not being reached in both these holes. The RC rig is operating on a three week on three week off basis due to the slow sample turnaround currently being experienced at the sample laboratory now out to up to 10 weeks.

Historical underground mine shafts, stopes and drives have also been modelled in 3D. This first drilling campaign will help us validate current modelling and the learnings from this drilling will also be used to update our current 3D models.

A Diamond drilling program has also been planned at Patricia and that will commence once the diamond drill rig can be mobilised to site in the coming months.

Patricia RC drilling has involved using a modern high pressure RC drilling rig with samples being drilled dry that are of a consistent sample weight. This high standard of drilling and sampling gives us confidence for a potential future JORC compliant resource to be estimated at Patricia. Patricia Gold Project Geology and Background Information

The current Patricia open pit is some 800m long x 150m wide and was mined to a depth of 25 metres.

“For Patricia RC drilling to intersect visible gold in two RC holes is a great result and validates the high-grade potential of the Patricia Gold Project. We eagerly await the assay results from this drilling,” Mr Pumphrey said.