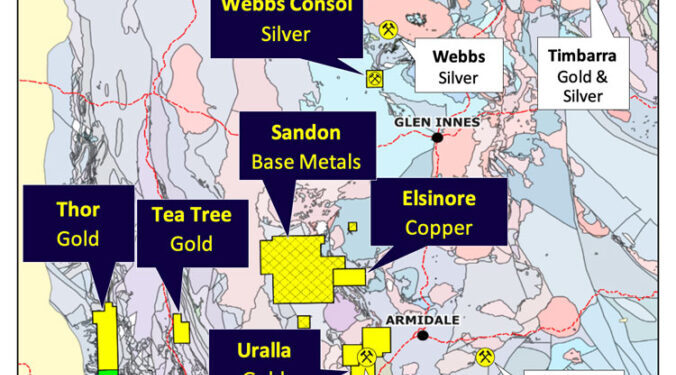 Lode Resources Ltd (ASX: LDR) has received significant copper and zinc assays plus consistent gold and silver credits from Phase I drilling at the Trough Gully Copper Mine, part of the Lode’s 100% owned Fender Copper Project in NSW, Australia.

TGY001 intersected anomalous mineralisation and TGY004 and TGY005 are awaiting assays. The TGY002 hole was abandoned early due to a collapsed collar.

Drill hole TGY007, which intercepted of high-grade copper and zinc mineralisation is located 30m below the deepest working demonstrating open-endedness at depth.

Prior to this campaign by Lode the Trough Gully Copper Mine had never been drilled despite a history of copper production that occurred periodically in the late 1800’s and early 1900’s.

High-grade copper ore was despatched from the mine from 1899 to 1916 and a reverberatory furnace was erected on the site in 1908.

Next Steps at Trough Gully

A representative section of mineralisation from drill core has been submitted for metallurgical tests. Early evidence that metals of value can be recovered through an economically viable industry standard processing route is as important initial step in assessing a mineral occurrence. It also allows metal equivalent values to be calculated under the JORC code.

Metal equivalent values are an easy way to demonstrate overall metal grade of intercepts via a single figure. Lode is planning to carry out a down hole electromagnetic (DHEM) survey, utilizing drill hole TGY007, to test for extensions at depth and along strike.

At this preliminary stage it is postulated that Trough Gully Mine mineralisation is present in foliation boudinage lenses. This may be the result of VMS style mineralisation being remobilised post burial due to heat and pressure (also known as metamorphic flow) and redeposit into lenses of varying thickness. DHEM may help locate possible thicker lenses prior to the commencement of Phase II drilling.