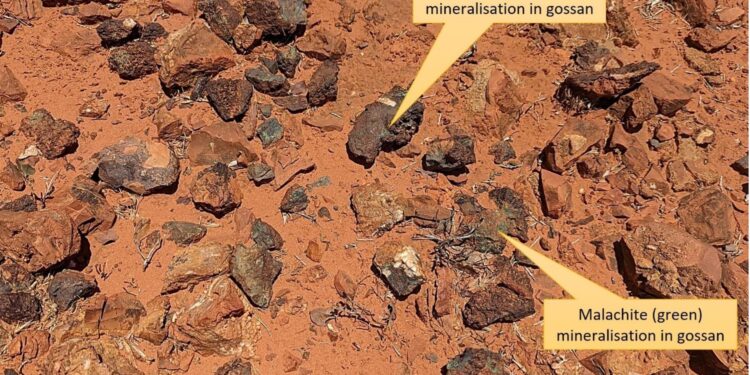 The full Phase 2 programme comprises a minimum of 18 holes for ~5,000 metres, however only seven holes for 1,476 metres were completed before the Reverse Circulation (RC) drill rig left site for the Christmas/New year period.

The seven RC holes completed tested two areas, a 300m extension zone along strike to the northwest of the Hasties Main Zone referred to as Hasties Extended and a new target now known as the Frenchman’s Prospect.

The highlight of the results received from the first half of the Phase 2 drilling programme was multiple Cu-Au intersections in hole 21STRC032, drilled at the Frenchman’s Prospect, located ~900m north of the Hasties Main Zone.

Historically, a single rotary-air-blast drillhole (HWR029) by Newcrest Mining (ASX: NCM) in 1997 returned a broad zone of oxidised copper mineralisation near surface, grading 39m @ 0.20% Cu from 8m. This zone was intersected down dip of outcropping malachite mineralisation which was observed 60m west of the drillhole.

These results are encouraging, and the Company will now look to follow up with further drilling at Frenchman’s as early as possible.

“We were keen to test the historical results at Frenchman’s as early as we could after mapping malachite mineralisation in gossan nearby,” Managing Director, Gary Harvey, said.

“With hole 21STRC032 intersecting Cu-Au mineralisation in fresh rock, this increases the prospectivity of Frenchman’s. Having only tested it with a single drillhole, we will now look to add further holes to assess the strike and depth potential as soon as possible.

“The five holes drilled along strike from Hasties Main Zone are inconclusive at this stage. Although we mapped and intersected zones of breccia and favourable alteration, we think we may have missed the main Hasties structure.

“The fact that 21STRC033 intersected antimony mineralisation at the end of hole, which is known to be strongly associated with gold at Hasties, suggests we may not be far away.”