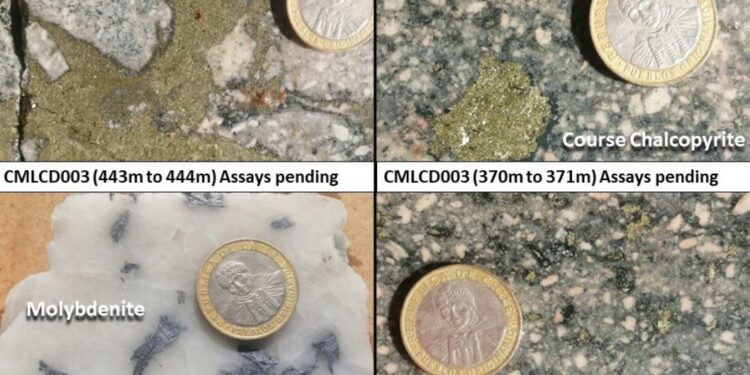 Culpeo Minerals Limited (ASX:CPO) has drilled a further significant copper and molybdenum intercept of 257m @ 0.95% Cu and 81ppm Mo from the ongoing diamond drilling programme at its Lana Corina Project in Chile.

“The broad zone of high copper and molybdenum grades from near surface in CMLCD002 is the widest recorded mineralised intercept reported from Lana Corina to date and has exceeded the Company’s expectations,” Mr Tuesley said.

“This result, combined with the previous intercept reported from CMLCD001 (104m @ 0.74% Cu & 73ppm Mo) continues to support the geological model that Lana Corina has considerable size and grade.

“These are exciting times for Culpeo as we await further assay results and continue to extend the mineralisation along strike and at depth.”

Immediately after securing rights for up to 80% of the Project, Culpeo began a maiden drilling program at Lana Corina to test high-grade copper mineralisation which outcrops at surface.

Lana Corina is associated with a structural zone orientated in a northeast-southwest direction with >1,000m of strike and up to 400m wide. The initial 4,000m diamond drilling programme comprises nine holes targeting breccia and porphyry hosted high-grade copper mineralised zones.

Assay results have now been reported for diamond drillholes CMLCD001 and CMLCD002; both of which have returned significant copper grades over wide intervals. The mineralisation encountered in CMLCD002 is associated with a considerably wide zone of breccia at the top of the hole and with diorite hosted vein and disseminated mineralisation deeper in the hole.

Molybdenite occurs as disseminations as well as with cross-cutting quartz-sulphide veins. The third hole of the program has just been completed and visible mineralisation was logged over a downhole interval of 250m (250m to 500m).

Building on the success of initial drilling at the Lana-Corina Prospect, the Company has completed a ground-based magnetic survey to map the alteration zone peripheral to the known mineralisation at Lana Corina with the aim of identifying additional breccia pipe targets for drill testing.

This survey covered 3.8km² with geophysical data being collected over 150 line km on 25m line spacing. Specifically, it is expected that data generated from the survey will help detect and define targets related to potential mineralisation, alteration, lithology, and structures within the Lana Corina Project footprint.

The collected data is now being modelled by the Company’s geophysical consultants and the results will be announced shortly.