Source: Canadian Mineral Production, March 2018. Reproduced with the permission of the Department of Natural Resources, 2018. 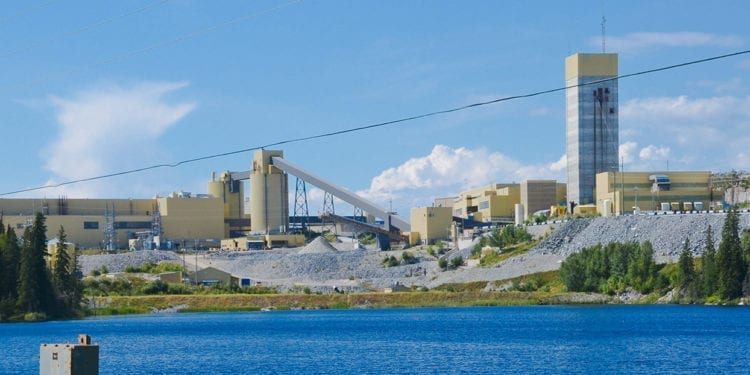 Canada’s mining industry produces 60 minerals and metals that constitute key raw materials for the goods we rely on in our daily lives, as well as for advanced and clean technologies: from utensils and hand tools to smartphones, electric cars, and solar cells. This information bulletin provides an overview of the latest trends in Canada’s mineral production. In 2017, total Canadian mineral production reached a value of $43.9 billion, an increase of 11.3% from the 2016 total of $39.4 billion. All commodity groups recorded gains in value, but results for individual commodities varied, with coal recording the largest year-over-year increase at 55.6% or $2.2 billion.

Mineral and metal prices fluctuate in response to changing market demand and the ability of suppliers to respond to these changes. Individually, most minerals and metals are considered homogeneous products that are hard to distinguish between producers. As a result, miners are generally considered price takers, meaning they have limited influence on the price of their product. Mining companies had been facing lower prices since a cyclical peak in 2011, largely due to oversupply in global markets. Price trends changed course in late 2016 and continued their recovery into 2017 for most base and precious metals. Not all commodities fared as well; however, as uranium prices continued to decline during 2017.

In 2017, the total value of metallic mineral production experienced a slight increase of 3.1% to $24.0 billion. Gold remained Canada’s top-ranked commodity by value of production in 2017, and its value and volume increased during the year by 1.2% and 1.7%, respectively. Nickel experienced declines in value and volume of production of 7.9% and 12.8%, respectively. While the price of nickel has started to rise from a low in early 2016, it remains below levels observed during most of the previous decade.

Cobalt is largely produced as a co-product from the mining of other metals and has seen its price surge due to increased use in batteries and limited supply. As a result, the value of Canadian production rose 85.7% in 2017 to $277.0 million, despite an 8.3% decline in production volume. The value of copper production was up 6.7% in 2017 on the strength of higher prices, which offset a 14.0% decline in output. The production of zinc rose 5.2%, and the value recorded a notable increase of 42.8% based on higher prices, which reflected global supply constraints. The value of production of iron ore experienced another year of growth as average annual prices trended higher in 2017. Its value and volume increased by 20.5% and 4.9%, respectively. Uranium experienced another challenging year, with a decline in the value of production of 53.1% to $585.0 million and in the value of output of 32.8%, which was the result of mines curtailing production in response to lower demand and prices.

The value of nonmetallic mineral production reached $13.6 billion in 2017, a 12.5% increase compared to 2016 (values exclude cementFootnote 1). Potash remained the top-ranked nonmetallic commodity, with the value of mine shipments increasing by 22.4% to $4.6 billion in 2017. Output also increased but proportionally less at 13.2%, as Saskatchewan saw the opening of its first new potash mine in over 40 years. The volume of Canadian diamond production increased by 70.7% in 2017 to 22.7 million carats, as two new mines reached their full production. The value of production grew to a lesser extent by 38.6% to $2.6 billion, which would indicate lower prices. Sand and gravel, the third most important nonmetal commodity by value and the most important by volume, experienced another year of growth with the volume of production rising by 3.6% and the value by 5.8% in 2017.

Canada’s overall value of coal production increased on higher prices for the second year in a row, rising 55.6% to reach $6.3 billion in 2017, even though output declined by 2.3%. Although Canada produces both thermal and metallurgical coal, the latter has the most impact on production value.

Ontario led all jurisdictions with a mineral production value of $9.9 billion, accounting for 22.5% of the Canadian total (Figure 1). Due to the increased value of its coal production, British Columbia ($8.8 billion) saw the largest increase in value and claimed second place, while Quebec ($8.6 billion) ranked third. These three provinces accounted for nearly two thirds of Canada’s total value of mineral production in 2017. 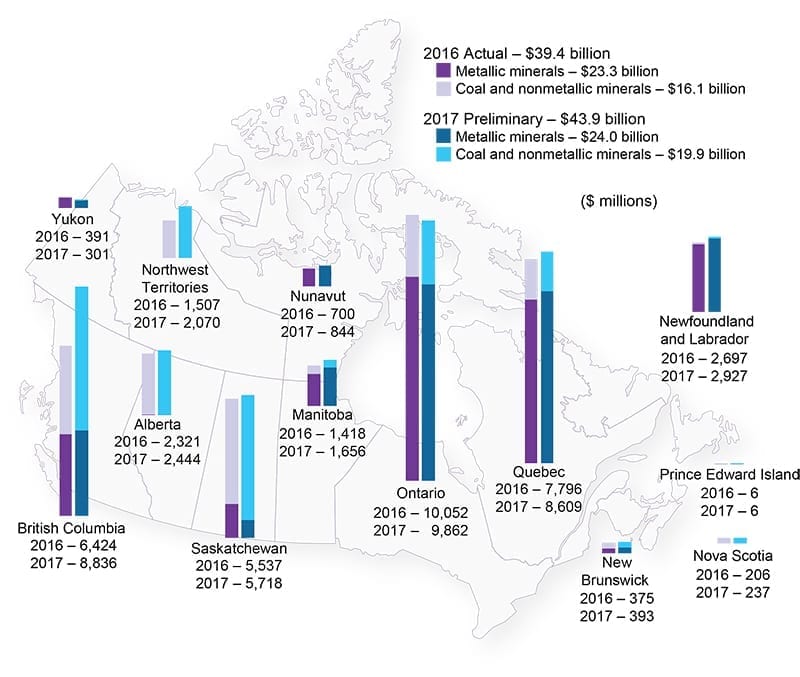