By Gavin Wendt, Mine Life

Precious metals like gold and silver do best in times of elevated inflation, because of their abilities to hold value, protect against currency devaluation, and provide investors with a safe haven alternative to financial instruments like stocks, bonds, derivatives, and other fiat-based assets. After all, gold and silver are time tested, trusted commodities, that have served as stable forms of currency throughout time, for millennia. Whereas, “all forms of fiat currencies eventually return to their intrinsic value, which is zero.” – Voltaire, famous French enlightenment writer and philosopher.

The past few months have proven extremely challenging for the gold sector, with trading momentum definitely on the negative side as speculators have firmly sided with the US dollar. These pillars of global financial markets move inversely proportionately to each other – i.e. when one’s rising, the other falls – and vice versa.

The graphic below represents gold’s price performance over the past six months. 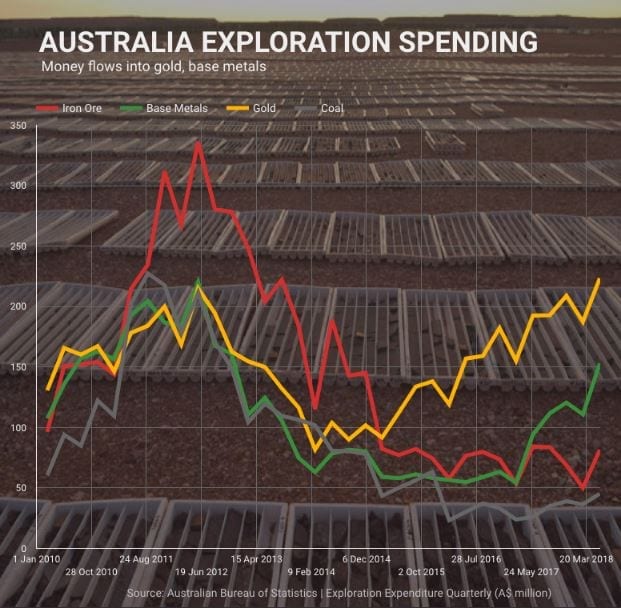 Nevertheless, the key underlying fundamentals with respect to gold at present still ring true and support higher gold prices. But why is this so?

Firstly, recent price gyrations are predominantly related to short-term trading positioning, especially as traders have deemed the US dollar as the go-to safe-haven of choice whilst the current trade imbroglio is resolved. Inflation is already spiking and trade tariffs and other factors will almost certainly accelerate the inflationary process. Furthermore, US national debt is the elephant in the room and the inconvenient truth that nobody wants to talk about – and the only way it’s going to get smaller is if it’s ‘inflated’ away.

In essence, the recent sell-off is overwhelmingly a transient phenomenon that’s decoupled from any intermediate or long-term fundamentals, which in my view presents a compelling opportunity for investors.

Let’s remind ourselves about gold’s unique status and why it has been a staple of the world’s economic systems for thousands of years. Gold is simultaneously both a commodity and a financial asset.

Central banks around the world retain gold as part of their foreign currency reserves. During 2018, as in past years, governments have continued to be net buyers of gold adding to official sector holdings. The two main accumulators of gold are China and Russia, whose gold stocks remain far below those of other leading nations like the USA and countries within the European Union. Whilst the Chinese and Russian governments have done some light buying in the international gold market, the bulk of their reserve accumulation has come from their domestic production. China is the world’s leading producer of the yellow metal, whilst Russia has considerable annual output.

This may come as a surprise to many people, but the price of gold was very stable for many years – almost 150 years actually. From about the inception of the dollar in the late 1700’s to 1932, the price of gold remained around $20 an ounce. In 1933, gold got re-priced to about $35 an ounce, and once the world’s monetary system became decoupled from gold in the early 1970s, the price began to rise drastically. Since then, the price has appreciated by about 3,400% to its current price of roughly $1,225 an ounce. By comparison, the DJIA and the S&P 500 are up only about 315% and 385% in the same time frame.

The explanation for this wide difference lies in the perpetual rise in inflation, immense levels of fiat-based assets and derivatives, combined with the continuous degradation of the dollar and other currencies. The bottom-line is that there is only so much gold and silver that can ever be mined, yet, fiat money can be inflated to infinity. Therefore, as global debt levels continue to rise, the inevitability of perpetual money inflation becomes inescapable.

The United States, as well as many other nations around the world, has enormous levels of debt. There are many countries out there with significant, problematic debt loads, but for the sake of simplicity we will focus on the U.S. alone. The U.S. national debt currently towers at around $21.27 trillion, about 105% of GDP. Moreover, U.S.’s personal debt is now over $19 trillion, total debt recently eclipsed $70 trillion, and total U.S. unfunded liabilities are over $114 trillion now.

This a problem because since 2000, the U.S.’s GDP has expanded by roughly 112%, whilst over the same period the national debt has exploded higher by about 325%, personal debt has grown by 134%, and total debt has increased by 168%. It is clear that debt growth is significantly outpacing the growth of the economy.

In addition, since 2000, the M1 money supply (monetary base) has been increased by 505%, M2 money supply has grown by 193%, supply of U.S. treasuries has exploded by 596%, and derivatives have grown by 512%. These are drastic increases over the past 18 years and are indicative of substantial money manipulation designed to inflate the global monetary supply.

Therefore, it is not a coincidence that the price of gold has increased by nearly 400% since 2000. As more fiat-based financial assets flood worldwide markets to support the current financial status quo, gold and silver have risen. This trend is very likely to continue and should accelerate going forward.

The U.S.’s debt burden is essentially unsustainable and the national debt will only get bigger with time. Right now, the Federal budget deficit is close to $800 billion. This means you can add about another $800 billion to the $21.27 trillion national debt in roughly one year from now. Moreover, Trump tax cuts, infrastructure spending, and other efforts to “grow the U.S. economy”, will likely cause the Federal budget deficit to blow out to over $1 trillion in future fiscal years.

Just by simply applying a 3% interest rate (which is very close to the current 10-year and an appropriate benchmark for national debt servicing), we arrive at an annual figure of about $640 billion. It seems clear that with the enormous Federal budget deficit, and the perpetual debt servicing, the national debt only has one way to go, and that’s a lot higher.

Amongst all of this, I believe there are various factors that could set the stage for a gold price recovery over the coming weeks and months, which I will outline below.

Tax reform at the end of 2017 in the United States triggered economic growth, a higher stock market, and an overall environment of optimism in markets across all asset classes. When Janet Yellen was at the helm of the Federal Reserve she often lectured Congress that monetary stimulus in the form of QE and low interest rates would only go far when it comes to economic growth. She told legislators that fiscal stimulus in the form of legislation was necessary to spur economic growth and take over from where the central bank left off.

In December 2017, the US economy received a shot of that fiscal stimulus on steroids in the form of a massive corporate tax cut. While the resulting economic growth is leading the Fed to tighten credit to avoid an overheating of the economy, the other side of the tax cuts is the reduction in tax revenues and the impact of higher rates on funding the US deficit – which now stands at US$21.3 trillion and rising. The ever-growing deficit in the US continues to inexorably erode the value of fiat currency, as the full faith and credit of the country is a function of how much it owes.

Rising interest rates are therefore not only a result of economic growth, but declining creditworthiness as the deficit grows. It is time that financial markets woke up to this fact. Gold is an economic asset that tends to hold its value over time, with the skyrocketing debt level in the US set to provide a key support mechanism for gold.

As we discussed earlier, the US dollar tends to trade inversely with the price of gold, with one of the reasons for gold is sitting at its lows for 2018 being that the dollar is sitting near its high for the year. The graphic above highlights the contrasting fortunes of the US currency and gold over recent months.

Now, whilst the US dollar is king these days when it comes to yield, its upward trajectory has been contained, as congestion at that level has contained the dollar’s bullish path. If traders begin to change their tune on the likelihood of future US dollar gains, it could generate the switch back to gold that will ultimately occur.

Let’s also not forget that the Trump Administration has stated on many occasions that they would like to see the dollar move to the downside. The reason for this is simple economics – a weaker dollar makes US exports more attractive in global markets and would particularly benefit the US in its trade battle with China.

The US political scene remains divided like few times over recent generations. The upcoming mid-term elections will either provide President Trump with validation, or put a giant roadblock in front of his initiatives for the next two years. While polls are leaning towards the opposition Democrats taking control of at least one house of Congress, we have learned that polls can be misleading. The level of the US stock market and economic growth would clearly favour the ruling party in an ordinary election; however few things are normal in the world of American politics these days.

At the same time, the investigation of Russian collusion in the 2016 and other issues continues to weigh on the Trump administration. Moreover, calls for impeachment by Democrats and a vitriolic environment in Washington, continue to rise to unprecedented levels.

Uncertainty over the election could cause volatility in markets in the lead-up to the November contests and gold could be a beneficiary.