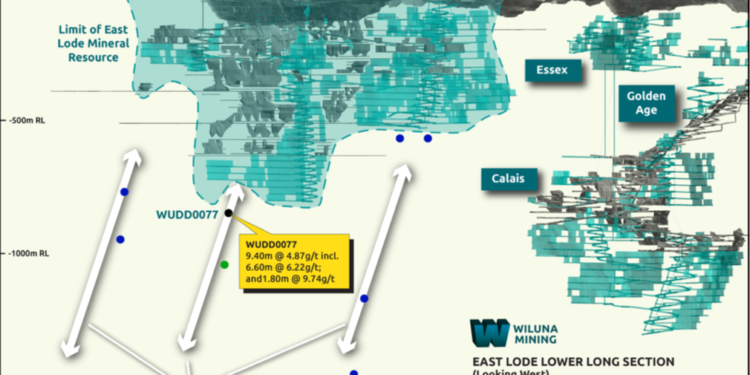 Wiluna Mining Corporation Limited (ASX: WMC) has confirmed the discovery of high-grade sulphide mineralisation in the first of eight holes testing down-plunge extensions of the East and West Lodes at its Wiluna mine in Western Australia.

The East and West Lodes were historically the main producing lodes at Wiluna with a combined endowment of 3.5Moz @ 5.4g/t.

High-grade >5g/t shoot discoveries are targeted to enhance the early years of the current mining plan with the intention of increasing the underground ore grade and to grow gold production.

“This outstanding intercept confirms our strategy to discover new high-grade sulphide shoots as we test multiple targets across the Wiluna Mining Centre, particularly in the South Mine Area but right across our very large gold system at Wiluna, as we look to expand beyond the current mining activity in the North Mine Area,” Executive Chair, Milan Jerkovic, said.

“After 125 years of historical mining, the Wiluna orebody continues to deliver exciting new discoveries; this new intersection is well below an area that was last mined almost 70 years ago.

“The intersection is close to existing modern access via the Golden Age and Calais zones, so it’s a relatively simple and low-cost exercise to develop across to drill further with the intention to rapidly grow resources and reserves.”

The East and West Lodes were historically mined to 600m depth during the 1930’s and 1940’s and produced 1.4Moz @ 7.6g/t, until production ceased at the end of World War II. When combined with the current Mineral Resource, the East & West Lodes have a large pre-production endowment of approximately 3.5Moz @ 5.4g/t.

A small number of wide-spaced holes were drilled below the lodes in the late 1990’s, which confirmed the continuity of the gold structures, although high-grade shoot trends were not adequately tested in the previous programme.

The East & West Lode discovery program tests for a repeat of the East and West Lode endowment, in a large target area of approximately 1,000m strike extent and between 800m to 1,500m below surface in an area that has been sparsely tested despite the large-scale and high-grade past production. Holes are designed to intersect modelled high-grade shoot locations on both the East and West Lode structures, which are sub-parallel structures less than 200m apart.