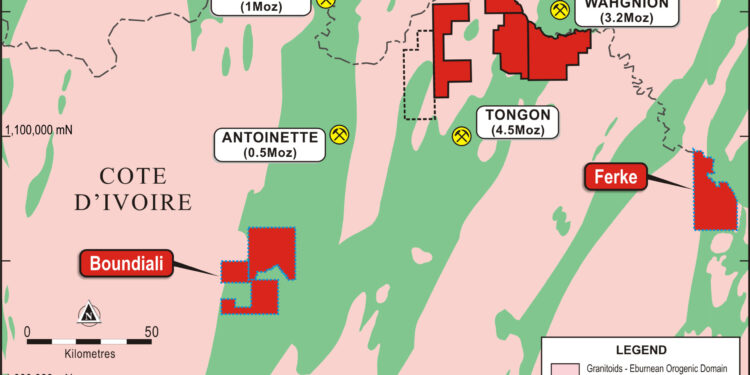 “These latest results demonstrate the potential to continue to extend mineralisation defined at the Nyangboue prospect, along strike, at depth and from new gold zones at surface. Turaco currently has over 7,000 samples at the laboratory from drilling across the Eburnea and Tongon North Projects and drilling is ongoing,” Managing Director, Justin Tremain, said.

On the belt’s southern extension into Cote d’Ivoire several smaller high-grade deposits have been discovered, including Perseus Mining Ltd’s Sissingue gold operation and Bagoe deposits and Montage Gold’s recent 4.6Moz Kone gold deposit to the southwest where the BoundialiSyama greenstone belt merges with the Senoufo belt.

At the end of 2021, Turaco completed a reverse circulation (RC) drill program, testing for extensions to previous drill results at the Nyangboue Prospect, and successfully intersected mineralisation down-dip into fresh rock.

The company has followed up that RC drilling with a small diamond drill program comprising eight holes (NDC011-NDC018) for a total of 1,771m.

Diamond drilling was undertaken to test for depth extensions where previous RC drilling had ended in mineralisation and to gain a better understanding of the geological controls to the mineralisation assisting in targeting extensions, and new mineralised zones along the Nyangboue trend.

Visual inspections of the drill core show gold mineralisation to be coarse (nuggety) and hosted in quartz veining.

Results confirm northerly down-plunge and dip extensions to the mineralisation:

92E Intersects Strongest Radioactivity To Date At The GMZ