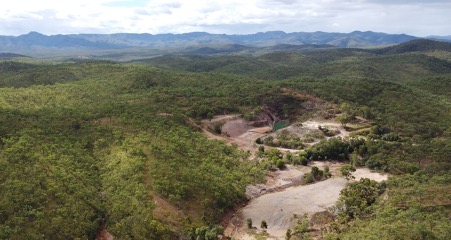 “Initial drilling of the Dianne Deeps target is giving the first step-out look at the stratigraphy and clear evidence of the right VMS deposit environments beyond the Dianne deposit itself,” Managing Director, Pat Williams, said.

“We are seeing encouraging geological sequences and evidence of proximal massive sulphide occurrences distinct from that at the Dianne deposit, giving confidence to known clustering effects with VMS deposits.

“Importantly, we have identified the Dianne High Strain zone which identifies over 20 EM drill targets conducive to volcanic massive sulphide (VMS) hosted deposits and have secured a second diamond rig to accelerate the preliminary drill testing programme of these targets and we look forward to unlocking the true potential of the region.”

The high priority Dianne Deeps target is based on the identification of a shallow electromagnetic conductor, located within 200m of the existing Dianne massive sulphide (VMS) mineralisation that has a response supporting the potential to reflect massive sulphide mineralisation. The target is positioned below, or on a south plunge, from Dianne within the same broader prospective stratigraphic and structural setting.

The conductive response identified in the various surface and airborne geophysical surveys have yet to be explained by the drilling to date. DHEM plate modelling from hole 22DMDDD19 is preliminary, however it has identified several subtle off-hole conductors. This high priority target remains untested with a view to now repositioning the next exploration hole in close proximity. A second downhole EM survey is planned for 22DMDD18 in an attempt to further refine the off-hole conductive responses.

Next Steps for Dianne

Further work outlined below is presently underway or planned in coming months.

• Completion of DHEM modelling and identification follow on drill targets,