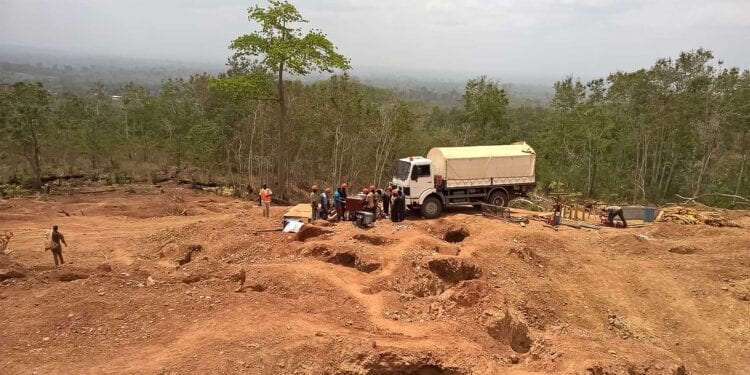 Metallurgical Studies To Commence In Early 2021

A large multipurpose rig is being mobilised to site to commence the RC/DD component of this second phase of drilling at Bankan.

A 10,000m drill programme will commence in early December, starting with a series of deeper holes at NE Bankan aimed at exploring at depth a thick, west- dipping, panel of gold mineralisation (e.g. 55m at 2.9g/t gold) on the western side of the gold deposit.

The drill rig will then move on to explore extensions to the Bankan Creek gold mineralisation (including 91.6m at 1.9g/t gold) at depth and along strike. It will also test near-surface, oxide gold mineralisation intersected on previously completed sections at NE Bankan in order to better define hole-to-hole continuity at shallow depths and also drill-test new gold mineralisation identified by the power auger drill program.

Managing Director, Paul Roberts, said the company will seek to accelerate drilling in early February with a second RC/DD rig in order to enable calculation of the planned maiden Mineral Resource Estimate in mid-2021. Concurrently, a programme of metallurgical test work is expected to start early in the March Quarter 2021.

“We are highly enthusiastic about our NE Bankan and Bankan Creek discoveries and consider that with a gold system now defined from surface at NE Bankan over a strike length of 1.3km and significant untested potential in all directions at Bankan Creek, it has all the hallmarks of an emerging. new major gold project in West Africa,” Mr Roberts said.

“We are strongly focused on delivering a maiden resource in mid-2021. With a cash balance of over $14 million, we are exceptionally well funded as we head into our next phase of RC/DD drilling.”

The Bankan-2 power auger programme is now well underway with 159 holes totalling 2,097m completed on an 80m x 80m grid, with the assayed saprolite composites typically representing 5-10m depth intervals collected from holes drilled to an average depth of 13m. Many of the holes were stopped short of their targeted 20m depth due to wet conditions at the end of the rainy season.

Much of the Bankan Project remains untouched by exploration with the Company undertaking a strategy aimed at substantially growing the auger-defined gold footprint across the Bankan Project. Combined with aeromagnetics and electrical geophysical surveys, the ongoing auger programs will seek to explore the entire 350 sq. km Bankan project area.

Reverse Circulation (RC) & Diamond Drilling (DD) program to commence in early December at the Bankan gold discovery, with a large multipurpose rig testing targets at and between the NE Bankan and Bankan Creek prospects. The next 10,000m RC/DD drill phase will begin by testing the down-dip extent of the NE Bankan gold deposit, where first phase RC and diamond drilling returned excellent drill results