Newly Listed Lightning Off to Fast Start at Dundas Project

Newly Listed Lightning Off to Fast Start at Dundas Project 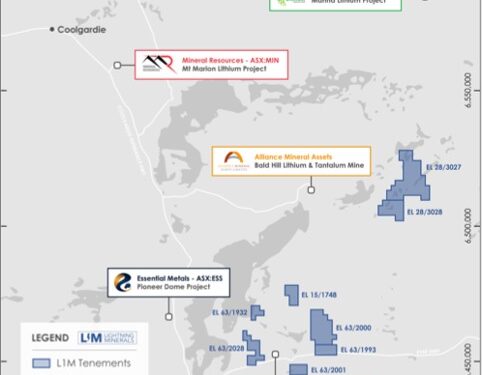 Following the Company’s successful recent listing on the Australian Stock Exchange it is implementing its discovery strategy with a focus on critical minerals and lithium across its Dundas Project.

o Soil sampling programme has commenced at the Dundas Project

o Surface mapping and reconnaissance also being conducted to identify

The extensive soil sampling programme across the company’s tenements is targeting multiple minerals including a suite of critical minerals and lithium. A surface reconnaissance programme of the project area is also being undertaken simultaneously to identify outcrops and further areas of potential mineralisation.

The company has also begun interpretation of geophysical survey data with a view to develop drilling targets as part of its discovery strategy.

“It is fantastic to be starting our exploration works at Dundas immediately post our successful listing on the ASX,” CEO, Alex Biggs said.

“The region is highly prospective for multiple commodities including a suite of critical minerals and lithium, demonstrated by recent exploration successes by multiple companies and proven by existing Resources in the region. We have a number of areas of interest that we will be focusing on during our initial campaign and combined with the geophysics interpretation that is being completed we aim to generate multiple high quality drill targets.”

The Dundas Project area is located near Norseman in Western Australia and comprises eight tenements totalling 454 sq. km. Norseman has a strong history of mining dating back to 1892 and is located 190km south of Kalgoorlie. Historically, Norseman and the Dundas area has experienced mining in gold and nickel although over recent years the region has become an emerging lithium and critical minerals province with multiple discoveries and significant exploration activity.

There are two project areas at Dundas:

b) North/Eastern tenements approximately 30km to the East of Alliance Mineral Assets’ Bald Hill lithium-tantalum mine.