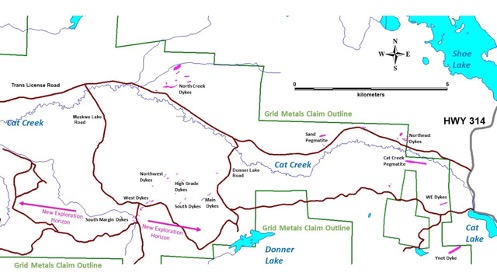 In addition, the company has started field work at the Property that will initially focus on sampling of several previously mapped pegmatite dykes. The project is located in the Winnipeg River pegmatite field, which hosts the world-class Tanco pegmatite and the associated Tanco lithium-cesium-tantalum mine and concentrator. The project is a 75%/25% joint venture between Grid Metals Corp and Lithium Royalty Corp., a leading player in global lithium finance.

The Northwest Dyke has been traced by drilling for ~600 metres along strike and to a vertical depth of ~250 metres. It is the second drill-defined LCT type pegmatite with significant strike length on the Donner Lake property.

Similar lithium grades were previously reported for the company’s 2018 drill holes targeting the Main Dyke, which is located ~1.5 km to the east of the Northwest Dyke. Note that the Northwest Dyke intersection lengths reported above do not represent the true thickness of the dyke, which is estimated to typically range from four to eight metres, representing 50-70% of the reported intersection lengths.

Complete analytical results for hoes GDL22-07, -10, -11 and -14, together with drill hole specifications for these and previously reported holes, are provided in the Appendices accompanying this release. Hole locations are shown on the accompanying plan view map and longitudinal section. Core photos from the newly reported holes are included below.

The property is viewed by Grid as very prospective for other lithium bearing LCT type pegmatite dykes. The focus is on identifying new drill targets to complement the Northwest and Main Dykes which have been the target of drilling to date.

“In addition to our drilling we look to rapidly progress the Donner Lake discovery process with the identification of new drill targets in the field. With the combination of results to date, geological prospectivity and access to infrastructure we view the project as having great potential.”