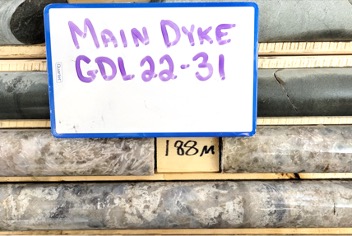 The programme will include resource delineation drilling at the Main and Northwest dykes and a series of exploration holes targeting untested spodumene bearing pegmatites. The company maintains the near-term goal of establishing a maiden resource from the Main and Northwest dykes via the current drilling program. The property is a 75%/25% joint venture between Grid Metals Corp. and Lithium Royalty Corp.

The company currently has two drills in operation on the Main Dyke and 15 holes for approximately 3400m have been completed since the start of the drilling several weeks ago. The Main Dyke is being drilled at an average pierce point spacing of 75 to 9m and approximate vertical depths of between 100m and 250m. This work will complement shallow drilling completed in 2018 and surface channel sampling completed earlier in 2022. Pegmatite units have been encountered in every hole.

Historical drilling from 1955 on the dyke covered a strike length of 810m. The Main Dyke remains open along strike and to depth.

Later in the programme resource delineation drilling will also be completed at the Northwest Dyke where fifteen exploration holes were completed by the Company in the first quarter of 2022. The 15 drill holes cover a strike length of 500m and returned intersection depths of <100 to >250m. The results of that programme indicated that the near surface part of the Northwest Dyke has an average true thickness of ~ 4.0m and an average grade of 1.3% LiO2. The Northwest Dyke remains open along strike in both directions and to depth.

Exploration Drilling Plan: Several other exploration targets in the area of the Main and Northwest Dykes are planned to be drilled in the course of the current drill programme. Targets include two outcropping dykes systems.

At the Southwest Dykes, 19 surface grab samples were taken of the surface pegmatites with six samples yielding assay values greater than 0.4% Li2O with the highest assay being 2.93% Li2O. The 19 samples were also anomalous in cesium, rubidium, and tantalum. At the South Dykes surface grab samples also returned anomalous lithium values and tantalum values (up to 579 ppm).

The company expects to generate additional exploration targets for future drilling through the integration of surface prospecting and mapping data, historical and recent litho-geochemical analyses, and 2D and 3D geophysical models of both magnetics and apparent resistivity.